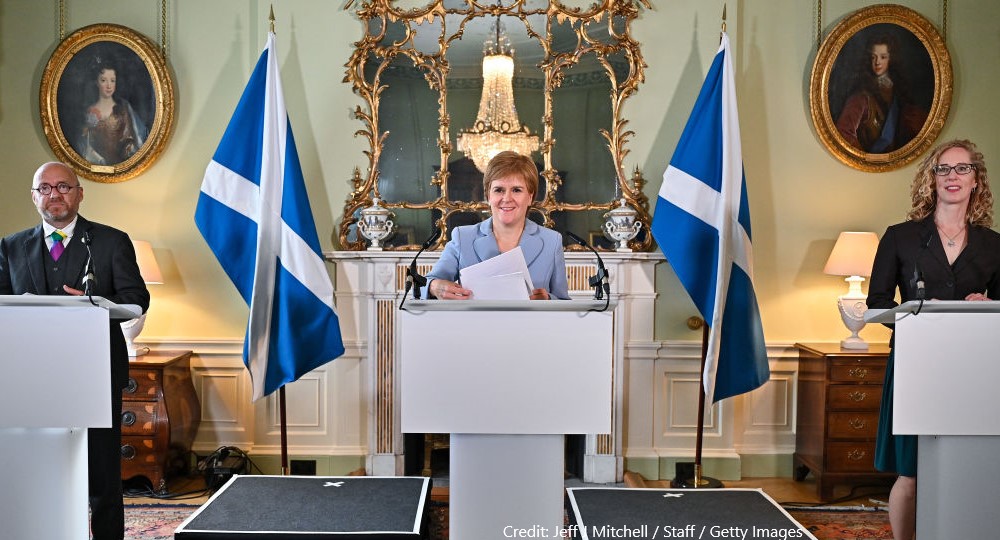 When Theresa May lost her majority after the 2017 general election, she rushed into a ‘confidence and supply’ arrangement with the Democratic Unionist Party, with considerable consequences for her ability to negotiate and secure a Brexit deal. Minority government, it seemed, is anathema in Westminster’s majoritarian political culture.

Not so in Scotland. Apart from the 2011-2016 session when the SNP had a small majority, minority or coalition government has been the norm in the Scottish Parliament. The SNP, which has held office for 14 years, has governed comfortably as a minority government for nine of these.

Indeed, the election of an MSP from the Scottish Green Party in the current session to the neutral role of Presiding Officer effectively meant that the Parliament would be tied 50-50 between government and opposition.

The Cooperation Agreement reached between the Scottish government and the parliamentary group of the Scottish Green Party was therefore a choice, not a necessity. It mirrors a similar arrangement that Jacinda Ardern’s (majority) government reached with the New Zealand Greens.

This is the first time Greens have served in national government anywhere in the UK, and is the closest the SNP has come, since it was first elected to the Scottish Government in 2007, to sharing office within another party. The optics are worth noting, however.

The shared programme spans a broad set of policy commitments.

There is a big emphasis on climate policy, including enhanced investment in public transport and active travel, transition away from fossil fuels, and accelerated deployment of renewable energy. Enhanced legal protection for the natural environment and a new land reform bill also feature.

Social policy commitments emphasise the importance of the Fair Work agenda and the living wage; affordable housing and enhanced tenants’ rights; an increase to the Scottish Child Payment to alleviate child poverty; enhanced LGBTI rights and protection of human rights; educational reform; and a National Care Service to transform the provision of social care.

Many of these commitments were already in the SNP’s manifesto, but the Agreement sometimes pushes them further, for example, in committing to a system of rent controls. The biggest compromise appears to be abandoning the commitment to complete the dualling of the A96 between Inverness and Aberdeen.

The absence of other big concessions reflects the broadly similar policy commitments of the two parties; their differences are of degree rather than of kind. Remaining ideological differences – for example, on economic growth, support for businesses, including in aviation and oil and gas, and international relations, including NATO membership – are excluded from the scope of the agreement.

Moreover, the parties have converged in the last decade on the key constitutional issues that dominate Scottish politics. The shared programme includes a commitment to ‘secure a referendum on independence after the Covid crisis’, with the expectation that this would be within the first half of the parliamentary session (effectively, before the end of 2024). Both parties are also committed to an independent Scotland rejoining the European Union.

But the deal does little to strengthen the likelihood of an agreed referendum process. There was already a parliamentary majority of SNP and Green MSPs to assure the passage of referendum legislation in the Scottish Parliament. The issue remains whether the Bill would be subject to legal challenge.

Why, then, have a cooperation agreement at all? Three reasons come to mind.

First, although the SNP has governed effectively without a parliamentary majority, it is simply easier to control the agenda without having to negotiate over votes.

The last year of the last session was particularly challenging, with parliamentary defeats and bruising ministerial votes of confidence – all while facing divisions within the party in the context of the Salmond inquiry. The Cooperation Agreement should ensure a comfortable parliamentary majority on budget and confidence votes, as well as broad swathes of the programme for government.

Second, strength within the Scottish Parliament can bolster the Scottish government in its engagement with the UK government, with whom relations have deteriorated during the Brexit process and have been especially strained during Johnson’s premiership. Enacting the United Kingdom Internal Market Act in December 2020, in the face of fierce opposition from the devolved institutions, has generated deep mistrust and a perception that devolution is under threat.

Third, after 14 years in power, and another five-year term to come, formal cooperation with the Greens creates the opportunity for a refresh. Agreement with a more radical smaller party can provide the left-leaning leader of a broad-church party with the opportunity to be bolder in policy terms than she might otherwise be.

And in the year of COP26, the deal with the Greens could bolster the Scottish government’s climate credentials and profile on the international stage.

But the Agreement is not without risk for both parties. The two Green ministers will be bound by collective ministerial responsibility in relation to their portfolios. For issues and policies out with the scope of the Cooperation Agreement, the Greens are free to act as a party of opposition. But it may prove difficult to be both in and out of government at the same time, and to maintain a distinctive identity.

The First Minister, for her part, will face the challenge of maintaining unity and loyalty across two parliamentary groups.

Offering the Greens the opportunity to shift from being a relatively niche party to a party of government – a transition made by the SNP not so long ago – could enhance the credibility of an opposing party in the eyes of the electorate.

But the electoral risks are low, and at least partially offset by the mixed member electoral system and the voting patterns it has generated.

The SNP overwhelmingly wins seats in constituency contests – 62 of the party’s 64 seats came from constituency contests. The Scottish Green Party focuses most of its efforts on the regional list contest, from where all of its representation has come. Although it stood candidates in 12 constituencies in 2021, there is little evidence of them diverting votes away from the SNP.

By Nicola McEwen, senior fellow at UK in a Changing Europe.