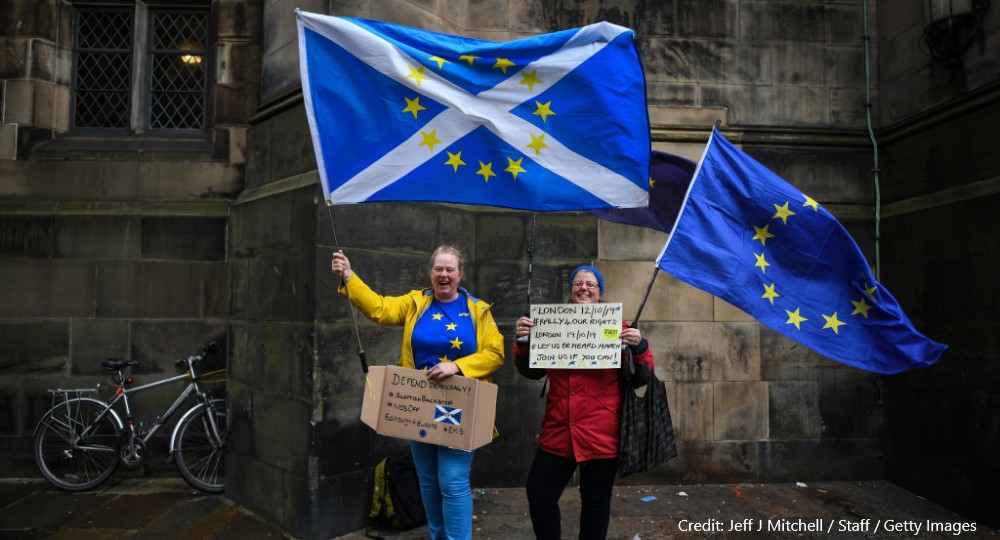 The rise in support for Scottish independence is now well established in the polls.

The trend first became apparent last year, when the level of support for increased from around the 45% mark, at which it had appeared to be stuck ever since the 2014 independence referendum, to an average of 49%.

This figure then edged up a little further to 50% by the end of January this year, when the UK formally left the European Union.

A crucial feature of the increase last year was that it was found to have occurred entirely among those who had voted Remain in 2016.

Although initially the outcome of the EU referendum seemingly did not make much difference to the aggregate level of support for Scottish independence, it was now becoming clear that the pursuit of Brexit was beginning to undermine the level of popular support for staying in the UK.

We have recently published a paper based on data collected by the Scottish Social Attitudes (SSA) survey towards the end of last year and the beginning of this – until the lockdown intervened – that charts and analyses the link that has developed since the EU referendum between people’s views on Brexit and their attitude towards Scotland’s constitutional status.

In so doing it provides in particular a systematic comparison of how the public now regard the arguments in these two seemingly intertwined debates.

First, though, we should note that the latest SSA survey has identified much the same movement in favour of independence that was being reported by the polls during the course of last year.

In response to a question that has been asked by SSA on a regular basis since the advent of devolution in 1999, and which invites respondents to choose between independence, devolution and not having a parliament at all, as many as 51% picked independence. This is up five points on the figure recorded in the immediate wake of the EU referendum and represents a record high.

Moreover, more than one analysis in the report shows that the increase in support for leaving the UK occurred entirely among those who either voted Remain in 2016, or who in response to other questions express positive views about the EU.

In short, the analysis adds further weight to the evidence of the polls that support for the Union has been undermined by the pursuit of Brexit.

But why might this be the case? In effect since 2016 the constitutional debate has come to be framed as a choice between an independent Scotland that would be aiming to rejoin the EU, and a Scotland that is part of a UK that is outside the EU.

This would seem to encourage voters to compare what they think would be the consequences of Scottish independence with what they consider will happen as a result of leaving the EU. Moreover, doing so is, perhaps, made easier by the fact that there are many striking parallels in the two debates.

In both discussions, there are not dissimilar arguments about the implications of what is proposed for the economy, identity, sovereignty and influence in the world. Our report provides a first systematic comparison of how voters regard the arguments around these four issues in the two debates.

The results, summarised in the table below, make unfavourable reading for those who are advocating that Scotland should remain part of a UK that is now outside the EU. 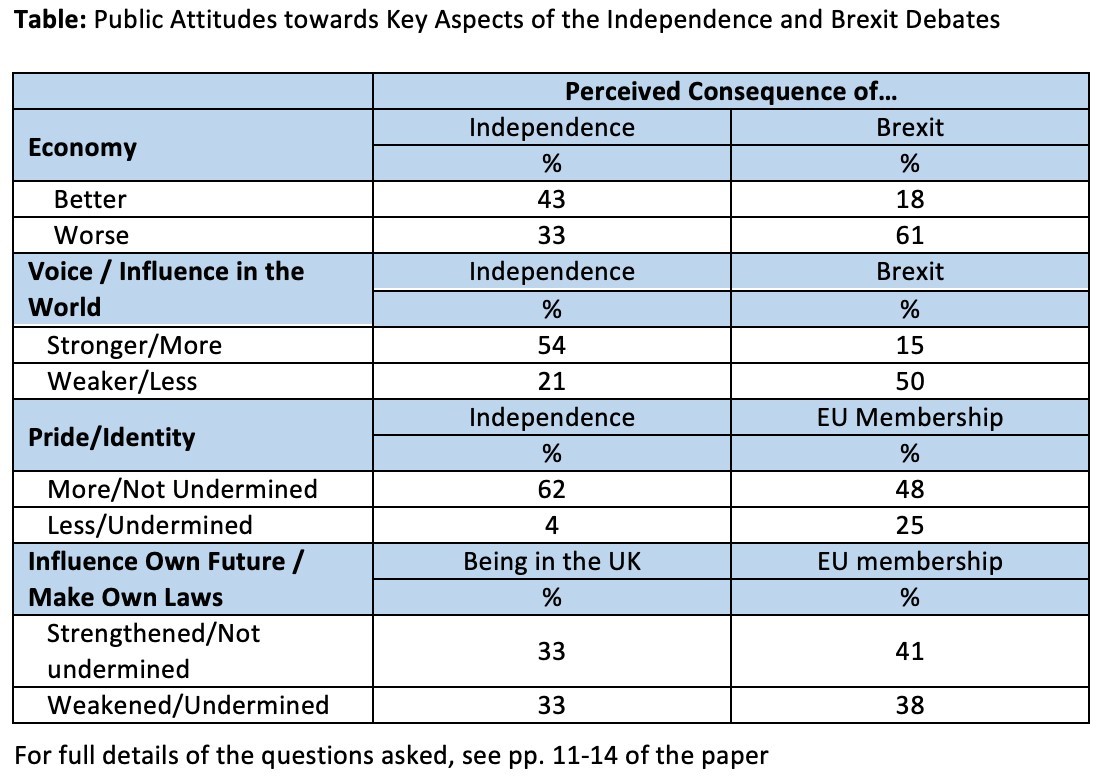 First, on balance voters are now somewhat more likely to say that Scotland’s economy would be better (43%) as a result of independence than they are to say that it would be worse (33%), a reversal of the position prior to the 2014 independence referendum.

In contrast, voters are more than three times as likely to think that Brexit would leave Britain’s economy worse off (61%) as they are to believe it would be better off (18%).

There is also a striking difference between the two debates in the perceived implications for national identity. Around three in five (62%) believe that independence would result in people having more pride in Scotland.

In contrast, only a quarter (25%) of voters in Scotland believe that Britain’s membership of the EU has served to undermine Britain’s distinctive sense of identity.

There is just one area where the balance of opinion appears to be similar across the two debates – the question of sovereignty. While one in three (33%) believe that being part of the UK weakens Scotland’s ability ‘to influence its future’, the same proportion (33%) take the opposite view.

Similarly, while 38% agree that being a member of the EU undermines Britain’s right to make its own laws, at least as many (41%) disagree with that view. Even so, there is seemingly relatively little here to counterbalance the generally unfavourable light with which Brexit is otherwise regarded as compared with Scottish independence.

Meanwhile, as we might anticipate, the difference between Remain supporters’ perceptions of Brexit and their views about the consequences of independence is even more stark.

Indeed, among Remain supporters even the comparison on the issue of sovereignty is relatively unfavourable to the Union. Only 26% agree that membership of the EU undermines Britain’s right to make its own laws, while as many as 54% disagree.

At the same time, while 30% believe that being part of the UK strengthens Scotland’s ability to influence its future, rather more, 40%, believe that the Union weakens its influence.

Against this backdrop, it should perhaps come as little surprise that Brexit has cast doubt in the minds of some Remain voters about the continued merits of remaining part of the UK.

Whatever doubts they have about the consequences of Scottish independence have seemingly come to be overshadowed by what they anticipate Brexit will bring.

By Ian Montagu, senior researcher at ScotCen and Sir John Curtice, senior fellow of UK in a Changing Europe. This blog was originally published by What Scotland Thinks. The full report ‘Is Brexit Fuelling Support for independence?’ can be downloaded here.