The Scottish Greens are on course for their best ever electoral performance in the elections on 6 May, in terms of vote share as well as seats – they are currently projected to win close to 10% of the regional list vote and up to 10 seats.

In contrast, the Wales Green Party looks set to continue their barren run in Assembly and now Senedd elections – they are currently polling below what would be required to win their first seat.

However, while the Scottish Greens secured seats in every single Holyrood election since 1999 and the Wales Green Party not a single one in any Welsh election since 1999, the two parties’ regional list vote shares were not far apart in three out of the four elections prior to 2014.

Only in 2003 did the Scottish Greens outperform their Welsh counterparts by more than one percentage point. The concentration of their support in urban centres in Glasgow and Lothian allowed them to turn even very small national vote shares into one or two seats.

The divergence since 2014 is not a coincidence. The constitutional question and scottish independence in Scotland has realigned Scottish voters to parties, creating an opportunity for the Scottish Greens that simply does not exist for their Welsh counterparts.

The figure below shows the correlation between attitudes towards the Scottish Greens, and attitudes towards other parties – essentially capturing how voters’ tastes for pairs of parties move in line with each other (or don’t).

Only after 2014 did attitudes towards the Greens increasingly correlate with those towards the SNP, as the proportion of survey respondents indicating they had similar feelings for both parties grew steadily. 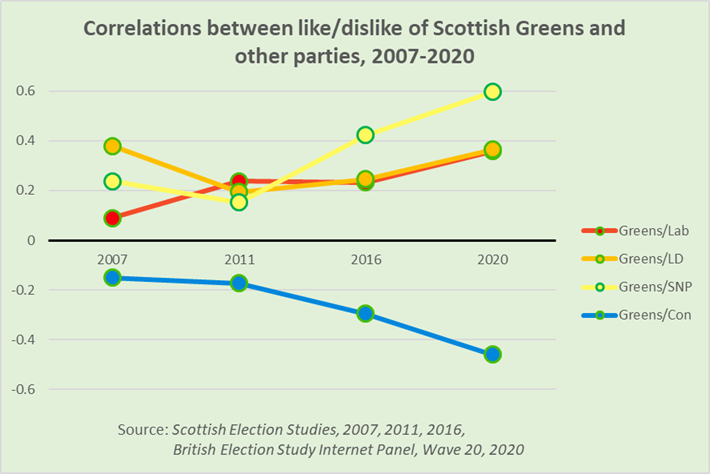 Now, for the most part, if you dislike the SNP you also dislike the Greens, and if you like one you also have warm feelings towards the other – note the correlation of 0.6.

But these attitudes are not perfectly aligned – primarily because there is a sizeable minority of SNP supporters who have no sympathies for the Greens, which are the likely target audience for Alex Salmond’s Alba Party.

This means that being pro-independence doesn’t have the same coupling effect for the Welsh Greens (with Plaid Cymru) as it does for the Scottish Greens (with the SNP).

The Greens are liked by a similar proportion of the electorate in Scotland and Wales (and also in England), with around 40% of voters scoring them higher than the midpoint on the like-dislike scale.

The current British Election Study (BES) contains a question asking respondents to indicate “[h]ow likely is it that you would ever vote for each of the following parties” (ranging from 0=very unlikely to 10=very likely).

The level of potential support for the Greens is not only similar in size but also in nature: potential Green voters in Scotland, Wales and England are – to almost exactly the same extent – younger, more likely to hold a degree, more left-wing, supportive of Scottish independence, more liberal, more positive about immigration and more likely to support rejoining the EU than the median voter in each nation.

The problem for Green parties is to translate this potential into actual votes. Under the first-past-the-post system used in general elections, they have only one constituency in the UK (Brighton Pavilion) where they have consolidated all that potential support into actual votes, four elections in a row since 2010.

Meanwhile, proportional representation elections give them their best chance, but performance is then conditional on the nature of the contest.

For example, the 2019 European Parliament election saw them performing better in almost all English regions than in Scotland – perhaps because the European context gave many potential Scottish Green voters more incentive to vote SNP.

The literature on multi-party politics suggest that voters have ‘choice sets’ or ‘consideration sets’, a number of parties that they could potentially vote for.

Both absolute preference for a party but also strategic considerations determine who they ultimately pick.

Over half of the electorate in Scotland, Wales and England have such a ‘consideration set’, choosing between two or more parties come election day.

While the Conservatives, and also to a lesser extent the SNP or Labour, can rely on committed voters who consider no other party, almost all of the Greens’ potential voters have multiple parties in their set.

In each case, much of the Green vote potential is shared with the dominant party: SNP in Scotland (80%) and Labour in Wales (76%).

But we see that almost all of the electoral potential of the Welsh Greens is shared with more than one party, mostly some combination of Labour, Liberal Democrats and Plaid Cymru.

So while there are many who could vote Green, most of them have plenty of other options – which currently provide a better chance of making their vote count.

In contrast, the Scottish Greens share a considerable part of their electoral potential solely with the SNP (over 10% of the Scottish electorate).

And critically, there is a strong incentive for those with a joint preference for the SNP and the Scottish Greens to split their vote.

The 2016 election revealed this incentive and, perhaps ironically, has now been reinforced by the emergence of Alex Salmond’s Alba Party, which actively campaigned in favour of ticket-splitting, but may not be the prime beneficiary of such practice.

By Dr Heinz Brandenburg, Senior Lecturer in Politics at the University of Strathclyde.