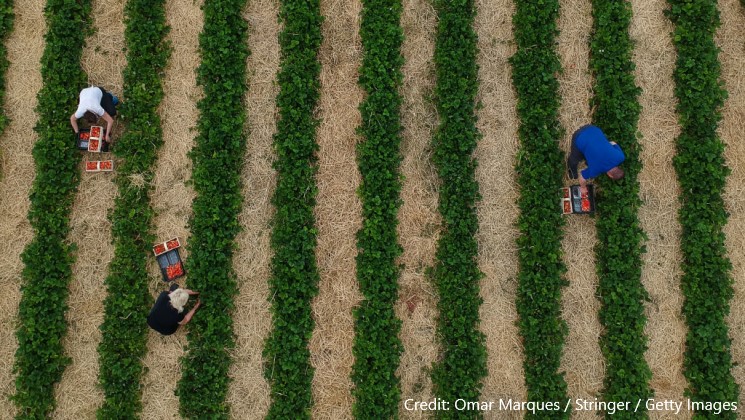 “This year we will need to rely on British workers to lend a hand to help bring that harvest home” noted the Environment Secretary George Eustice at the daily coronavirus briefing on 19 May.

UK residents, particularly furloughed workers and the unemployed, were invited to sign up to work on farms to harvest fruit and vegetables on a newly launched website – Pick for Britain – backed by the Department for Environment, Food and Rural Affairs. The campaign also received support from Prince Charles.

Estimates suggest that 90% of the 75,000 seasonal workers in edible horticulture in the UK are migrants from the EU.

This high dependency on overseas workers has been developed since 1945 through continuous recruitment via a special policy – the Seasonal Agricultural Worker Scheme – which was only suspended in 2013.

The Covid-19 pandemic has created labour shortages provoked primarily by difficulties in recruiting workers from abroad, and which threaten the UK food supply.

With the Brexit transition period coming to an end, and the proposed increased restrictions on EU migration for low paid work in the UK, an increase in the number of British workers in horticulture can provide an important replacement workforce. However, this idea comes with several challenges.

Recruitment and retention of workers in seasonal horticulture: what are the challenges?

Work on farms is intensive physical labour, taking place outside in all weathers and with early starts. Workers tend to live on farms away from their families in shared accommodation. Seasonal work is typically offered for a maximum of six months and it does not come with opportunities to upskill.

Given these working conditions, domestic recruitment has always been difficult, and the sector remains dependent on migrant workers. Current travel restrictions and quarantine policies limit the capacity of UK famers to recruit from abroad.

The challenge is not just about recruitment. Those working in farms are also more likely to be exposed to Covid-19.

Germany made special concessions to farmers earlier this year allowing them to airlift workers from Romania and Bulgaria in response to Covid-19.

As outbreaks started, German farms and meat processing sites have been designated Covid-19 hotspots, triggering an array of stricter regulations. Similar outbreaks could occur in Britain.

Can furloughed and unemployed workers be the solution?

Millions of workers are currently furloughed or unemployed. The government’s furlough scheme provides some flexibility for workers to take a second employment, unless it is explicitly prohibited in their original contract.

However, there are four key considerations in this context:

First, farms tend to be far from transport links and urban areas where population is concentrated, which means that workers would need to move across the country to take on these jobs.

Meanwhile, work with similar pay is often available in the local supermarket, for example, where demand is also on rise in the pandemic.

Second, early indications are that the retention of farm workers from the UK is low, which suggests that many farmers will be worried about their commitment to stay until the end of their contract.

In particular, as the lockdown restrictions are lifted, these workers will be asked to return to their original occupations with little notice, leaving farmers with a reduced workforce. In contrast, migrants have a much higher likelihood of remaining for a full season, with estimates suggesting a 91.5% retention rate.

Third, harvesting fruit and vegetables requires certain set of skills. The most obvious one is capacity to do a physical job (e.g. bending, carrying, lifting) for long hours. A substantial portion of unemployed and furloughed workers don’t meet this requirement.

Fourth, few workers in the UK have experience in agriculture – making additional training necessary. On the other hand, migrants often return to the similar work year after year lowering the time necessary for, and costs of, recruitment, training and induction.

The National Farmers Union estimates that 40.8% of workers tend to return year after year.

What does this mean for the near future?

Initiatives to recruit domestic workers in the agricultural sector such as Feeding the People or Home Grown Land Army that have been active since the start of the picking season seem to have had limited success, with only 0.2% of those who expressed an interest ending up taking the jobs.

This experience, combined with the limitations noted above, suggest that there is limited potential for the UK workforce to take over the agricultural sector in the short term.

A new scheme to recruit seasonal workers from non-EU countries after Brexit, the Seasonal Workers Pilot, is being tested, but it is small (10,000) and contingent on visas. The adoption of new technologies can be another possible solution, but implementing such technology is expensive and requires time.

Therefore, it is not a solution in the context of a sudden pandemic.

It is also possible to make use of the current migrant population in the country in different ways. For example, Spain and Italy offered residence permits to undocumented migrants who took jobs in agriculture, and Germany is considering allowing asylum seekers to take seasonal work.

However, it is unlikely that there will be an appetite for these types of policy changes in the UK in the near future.

This means that in the short term, the UK does not have a clear alternative to the EU seasonal migrant workforce. This has been exemplified by some farmers mobilising to bring Romanian workers on charter flights and to persuade the Romanian state to waive its ban on international travel.

Academics can play a major role in informing this debate moving forward.

This includes research insights on whether seasonal migrant workers will continue arriving in the UK and under what conditions, to what degree initiatives to encourage the domestic workforce to enter into the agricultural sector could have any effect, if the Seasonal Workers Pilot can provide adequate support for the needs of UK farmers, or if technological changes can be successfully implemented.