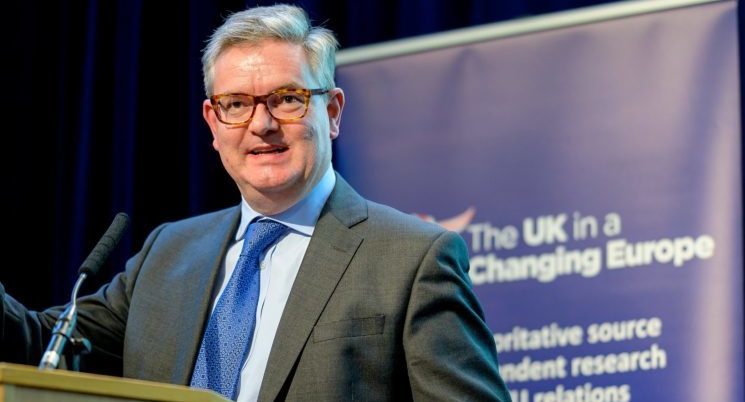 The EU wants to be geopolitical. It wants to put on some geopolitical muscle. It’s tired of having sand kicked in its face. Or, as Sigmar Gabriel put it, tired of being vegetarian in a world of carnivores. But how far is it going to get? And what’s that mean for the relationship with Britain?

The EU wants to use its trade weight and regulatory reach more assertively on the international stage, including on climate and tech. It’s too soon yet to say how this’ll work out, and what kind of push back there’ll be.

But the EU is already establishing a role as a security actor. In an ever more ambiguous world, where the borders between criminal, economic, industrial, and state actors are blurred; where there are threats to commercial, economic and societal integrity – to the way we live our lives – you need a broad sense of deterrence as well as a flexible range of responses.

Which is where the EU comes in, with its range of policies, instruments, and relationships, from commercial and economic to political and security. It’s not in the business of hard military deterrence, but it does work to identify risks and weaknesses, and to build capabilities to manage and mitigate them, to reinforce resilience.

There may be a debate around the EU’s ambitions to be a defence capability builder, but let’s see how big the European Defence Fund is, and how it works in practice.

Meanwhile, the EU is already delivering on responses to a range of new and developing security threats, from countering terrorism, cyber, cyber enabled and hybrid threats, including tackling political interference and disinformation.

With the member states, it’s working to secure our critical digital infrastructure – like 5G, the digital plumbing of our interconnected lives – and to tackle the security dimension of new technologies like cloud, AI, quantum, as well as to secure the underlying data.

Running through all of this work, as a common theme, is the need for like-minded countries to come together in shared self-interest, to tackle shared threats to largely shared values.

What does all this mean for the EU’s future relationship with Britain?

Much of the focus and analysis has, understandably, centred on the future trade and economic relationship. But there is also a future security relationship to think about – where both sides stand to lose out if it goes wrong.

The Prime Minister has talked about continued cooperation with the EU in foreign and defence policy, without the need for any new treaty or institutions. The government has pointed to the mutual interest in protecting citizens, and possible operational cooperation on law enforcement and criminal justice.

The EU, for its part, envisages an agreement on future relations also covering law enforcement, judicial cooperation, foreign policy, security and defence. This is predicated on adherence to the European Convention on Human Rights, recognition of the European Court of Justice as arbiter of EU law, and a decision on data adequacy, protecting personal data.

While both sides signal a willingness to cooperate, it’s not clear they will the means.

I used to say, in my last job, there was a clear shared mutual self-interest in finding ways of tackling shared threats together. I also argued there was a distinction between security cooperation, with this clear shared interest, and economic and trade relations, which are necessarily more distributive.

But the EU’s position, as set out in the emerging negotiating mandate, is that different aspects of the future relationship should be, as far as possible, taken forward together, and accompanied by over-arching governance arrangements. This is the institutional equivalent of nothing is agreed until everything is agreed (with the exception of fish, the EU says, which should be agreed first…).

I think this is going to be a challenge. It potentially puts finding a way forward on security in hock to the economic and trade discussions, which are going to be tough given the respective starting points. And it increases the risk of misunderstandings and miscalculation.

I think my ex-colleagues in the Commission, or some of them at least, misinterpret the significance of the government’s majority. I see no evidence that it means government thinks it’ll have scope to soften the line, and move towards the EU, as negotiations progress.

Again, I think that the EU believes that by raising the bar, and linking issues, it might change the debate in Britain and change the government’s approach. Putting fish up front, holding financial services equivalence and data adequacy in abeyance, pushing for maximum level playing field preconditions, a tough line on mutual recognition, seeking upfront agreement to heavy penalties for divergence….I’m just not sure this is going to have the effect the EU thinks.

I’m not sure that the ‘Barnier playbook’ that in the EU’s eyes worked in its favour last time around – playing the clock, playing issues long, up against deadlines – will work the same way this time around. Things have changed on the UK side, and  it’s not clear that that has fully sunk in on the EU side.

And that leaves me concerned.

I don’t think it’s wise to bundle everything together; I do think different aspects of future relations should be dealt with on their merits.

In particular, there is a clear case for cooperation on foreign, security and defence policy, where interests converge; on tackling terrorism, cyber and cyber-enabled threats, disinformation, and other hybrid threats; and in promoting law enforcement and judicial cooperation.

The EU as a security actor should be working with like-minded partners, like Britain, on these issues. A geopolitical EU should be building partnerships in order precisely to have the kind of effect it seeks on the international stage, on security as well as issues like climate and tech.

And I hope all involved can keep this in mind as things unfold over the coming months.

By Sir Julian King, EU Commissioner for the Security Union 2016-19. You can watch Julian King’s full keynote speech from our Britain in the world conference here.