Shining a light on consent and democracy in Northern Ireland 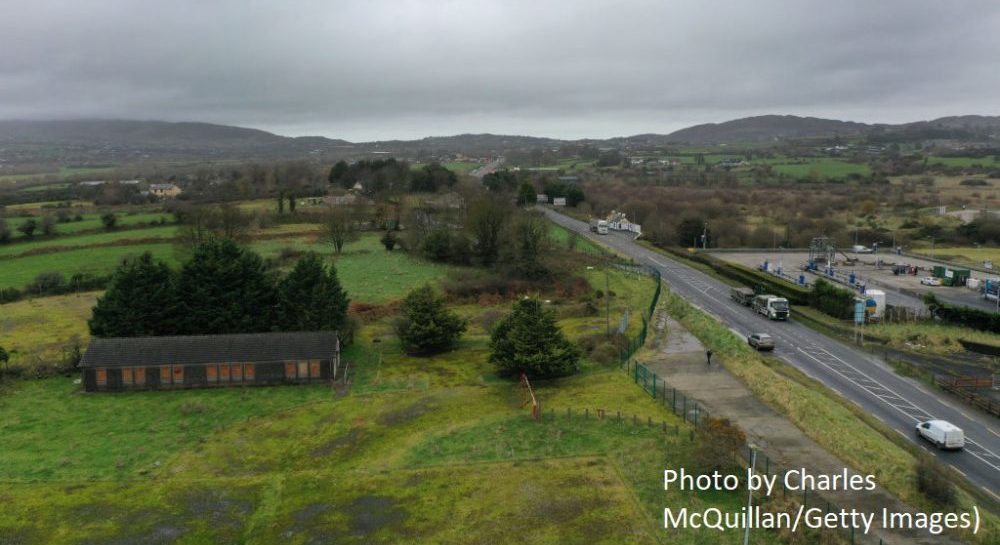 Northern Ireland has found itself at the centre of a perpetual Brexit conundrum: how can the whole of the UK leave the customs union and single market while simultaneously avoiding any customs or regulatory checks on the island of Ireland?

Recognising the difficulty of securing both, the backstop emerged as an insurance policy to at least ensure the latter.

Both sides made a commitment to prevent any hardening of the border between Northern Ireland and the Republic of Ireland; the backstop offered a mechanism for protecting this joint commitment regardless of other decisions taken by the UK.

It may no longer be called a ‘backstop’, with some important revisions to the original terminology, but it is difficult to see how any new deal can be agreed between the EU and the UK without some form of legally operable mechanism to maintain the status quo on the island of Ireland.

Boris Johnson’s administration now appears to accept that Northern Ireland can exit the EU on a different basis to the rest of the UK, but with a qualification: that it is able to give its democratic consent.

This raises another sticking point.

Those keeping track will note that Northern Ireland has now been without a devolved government for over 1,000 days.

Therefore, a fairly obvious question arises: how can Northern Ireland give its consent for any proposed arrangements when it has no functioning devolved institutions?

Let’s, for the moment, assume that the Northern Ireland Assembly is able to perform this function.

The question then becomes how the Assembly expresses its consent.

Whereas the consent of most legislatures is typically determined by a simple majority vote, the consociational design of Northern Ireland’s institutions effectively give nationalist and unionist legislators a respective veto.

In other words, cross-community consent may be required on certain issues.

If the Assembly were asked to consent to Northern Ireland remaining aligned to EU rules, unionists would plausibly exercise a veto – given their opposition to key elements of the backstop so far.

Similarly, if the Assembly were given the power to see Northern Ireland diverge from EU rules, nationalists would likely be opposed – given their support for the backstop.

In other words, the very framing of the status quo versus the alternative matters a great deal, and highlights that Brexit has tended to reinforce underlying ethno-national divisions.

If each community has an effective veto, there is unlikely to be cross-community consent for any option.

However, looking beyond the immediate issue of Brexit and any specific arrangements that uniquely affect Northern Ireland, there is also a wide degree of support among Northern Ireland’s political parties for reforming the veto mechanisms of the Assembly.

So far, there appears to be little agreement over how these mechanisms should be reformed, such as by introducing qualified majority voting or by restricting the issues for which vetoes may be exercised.

There has been much broader recognition – across unionist and nationalist parties – that veto mechanisms have contributed to unsustainable gridlock in Northern Ireland politics, even before the latest collapse of the institutions.

Therefore, this brings us to a more fundamental issue.

The challenge is not simply about the absence of Northern Ireland’s devolved institutions or the difficulty in restoring them, but it is about restoring them in a way that allows them to function on a sustainable basis.

Reforms will not be straightforward, but, frankly, neither is any alternative.

After the restoration of Northern Ireland’s power-sharing institutions in 2007, they commanded a relatively high level of support, despite their ups and downs.

When people were asked about their preference for Northern Ireland’s long-term constitutional future in the annual Life and Times Survey, the most popular option has consistently been for Northern Ireland to remain in the UK with a devolved government.

In 2016, Northern Ireland remaining in the UK with a devolved government was the most popular option among both Protestants (67%) and Catholics (41%). 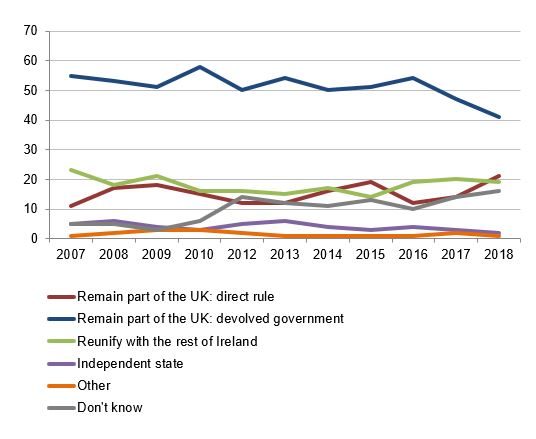 Since 2016, there has been a rise in support for direct rule from Westminster, while support for Irish unity has consolidated (and risen in other surveys).

But support for these two options still lags behind the option of devolved power-sharing within the UK.

Crucially, neither of these alternatives commands cross-community support.

In 2018, only 12% of Catholics said they preferred direct rule from Westminster above the other options (compared to 28% of Protestants).

Moreover, Irish unity is the long-term preference of only 5% of Protestants (compared to 39% of Catholics).

In short, despite the devolved Assembly lying dormant for over 1,000 days, and despite its prior performance leaving much to be desired, it remains the only viable game in town in Northern Ireland.

Brexit has created an uneasy paradox.

It has generated uncertainty that has significantly reduced the incentives to restoring Northern Ireland’s devolved institutions, while simultaneously highlighting precisely why these institutions need to be restored on a sustainable footing.

If it is considered important for Northern Ireland to somehow consent to the arrangements contained in any deal between the UK and the EU, it would be difficult to ignore the region’s broader (undemocratic) political landscape.

As long as Northern Ireland’s devolved institutions lie dormant, and as long as the wider political context does not incentivise their restoration, it will be challenging to determine democratic consent for anything.