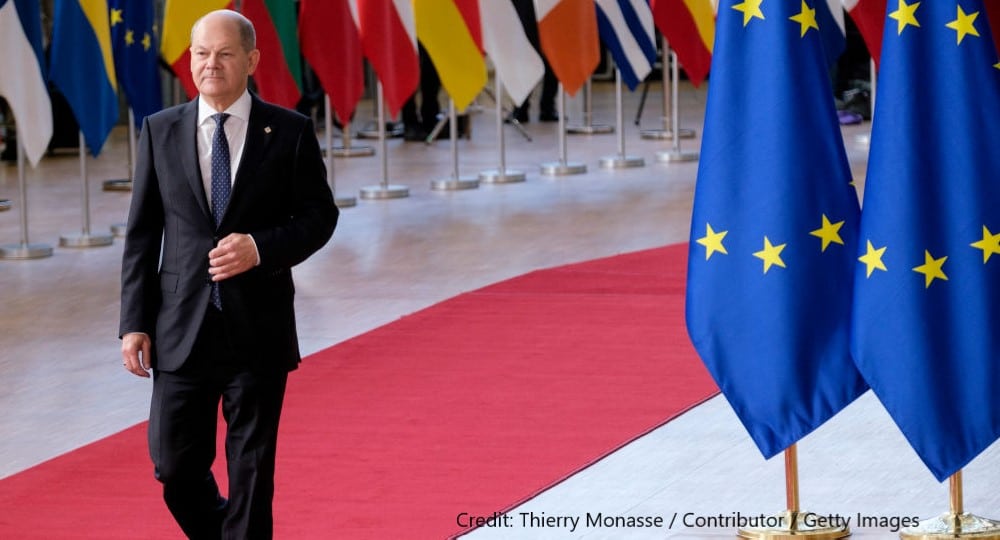 Derrick Wyatt highlights the European Union’s federal direction of travel and analyses the implications of this for the UK post-Brexit.

The EU has not stood still since the Brexit referendum. An historic development was its decision in 2020 to issue bonds on behalf of all Member States to fund a 750 billion euro post-pandemic Recovery Plan.

The German Finance Minister at the time (and now Chancellor) Olaf Scholz  described agreement on the bond issue as a “Hamiltonian moment”. That was a reference to measures adopted by the United States’ first Treasury Secretary Alexander Hamilton, and what Scholz meant was ‘we have just taken a step towards a United States of Europe.’

Other steps in a federal direction are on the cards.

President Macron has repeatedly ruled out EU enlargement until reform of EU decision-making is achieved. By this he means removal of national vetoes to prevent constant deadlock in an enlarged EU. In a recent speech, Chancellor Scholz of Germany said much the same.

It is possible there may be  a political deal to be done, whereby national vetoes are surrendered by those who want to see enlargement in order to make that enlargement possible. Only time will tell. But the history of the EU to date has been one of increasing powers for the Union and European Parliament, and the progressive elimination of national vetoes in EU decision-making. Few commentators believe that that process has come to an end.

The EU has always been a federal project in which economic integration was designed to drive political integration. UK Governments for the most part handled this by endorsing the Single Market and the Customs Union as being in UK interests, while doing their best to resist increases in EU powers, and the erosion of national vetoes.

That is not to say that the UK was kidding itself, nor that its position was untenable. Indeed, the UK carved out for itself a semi-detached role in the EU through a series of opt-outs from some aspects of EU Membership.

The euro stands out as more than a symbolic landmark on the EU’s path towards a federal destination. But the UK opt-out meant it was never legally committed to it. Other UK opt-outs related to the border-free Schengen Area, the EU Treaty provisions on Justice and Home Affairs (covering asylum and migration issues), and the EU’s Charter on Fundamental Rights.

The UK was also relieved of some of the budgetary costs of EU Membership as a result of the rebate negotiated by UK Prime Minister Margaret Thatcher in 1984, which was only partly relinquished by the Blair Government in 2005.

The UK’s EU Membership was distinctly à la carte. If the UK rejoined the EU it could not expect to be granted the opt-outs it enjoyed in the past. On the contrary, the EU might want assurances that the UK was genuinely committed to EU core values such as joining the euro.

Prime Minister David Cameron’s attempt to renegotiate the UK’s EU Membership in the run-up to the 2016 Brexit referendum was designed to counter further steps to a federal Europe and to roll back centralised decision-making. He aimed to exempt the UK from the EU’s commitment to an ‘ever-closer union among the peoples of Europe‘, and to increase the powers of national parliaments to block new EU laws.

But the results of the Cameron ‘renegotiation’ were largely cosmetic and barely figured in the subsequent referendum campaigns, which focused on the economic pros and cons of EU Membership and the free movement of persons.

Pro-EU campaigning that argued that the UK should remain in the EU because it could not afford to leave it, which was described by Brexit supporters as ‘Project Fear’, deeply disappointed many Remainers. They had hoped to see a more positive case put for EU Membership, with emphasis on the EU as a force for good in the world, upholding democracy, human rights, and the rules-based international order.

In the here and now, Brexit remorse has set in. Brits blame Brexit for damaging the economy, most no longer think it was the right decision, and a clear majority of those expressing a preference say they would vote to join the EU.

For most pro-EU UK politicians, it is too soon to commit to EU Membership, but not too soon to think about where changing views on Brexit might lead. In any debate on UK Membership, honesty demands that the EU should be presented as more than just a Single Market and a Customs Union. It is a political union as well as an economic union. At home and abroad it promotes democracy and the rule of law, and it has a positive approval rating around the world.

It is no longer fanciful to ascribe a federal destiny to the EU. If history gives Brits a second chance to vote on EU Membership, part of the question they will have to answer will be whether they want to join the Single Market and Customs Union. But another part of the question will be whether they want to share the EU’s federal destiny, pool their sovereignty with that of their fellow Europeans, and vote for politicians who would have the imagination and the resolve for the ‘Hamiltonian moments’ which they would surely encounter.

If voters want the economic benefits of EU Membership without the federal future, they might still accept the latter as the price of the former. Or they might choose to support the EU’s federal future from the outside, as a close ally and trading partner of the Union. It is certainly possible to envisage improvements being made to the UK/EU Trade and Cooperation Agreement, when UK/EU relations improve, as they surely will.

The choice for the UK between joining the EU’s ‘United States of Europe’, and playing the role of a burly Canada, might not be straightforward.

Brexit might be done, as Boris Johnson promised, but the debate about UK Membership of the EU is not over.