Sinking the ship? the DUP, Brexit and the border 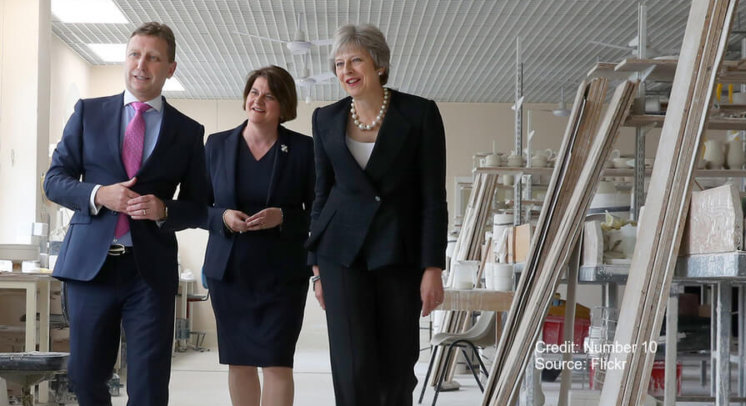 With less than 150 days until the United Kingdom leaves the European Union, the government claims to have 95 per cent of the Brexit deal ticked off. Within the remaining five per cent is an issue which shows no clear sign of resolution: the nature of the border on the island of Ireland.

The 310-mile border between Northern Ireland and the Republic of Ireland was always going to be the greatest hurdle in Brexit negotiations. The impact of a hard border to trade, movement of people and the peace process has been widely debated by various parties hoping to shape the nature of Brexit. One of the parties hoping to exert their influence on the government’s negotiation position on this issue is the Democratic Unionist Party (DUP).

DUP MP and ardent Bexiteer, Sammy Wilson, recently likened Theresa May’s Brexit strategy to that of the Captain of the Titanic. The comparison served as a thinly veiled warning to the Prime Minister of the DUP’s capacity, and willingness, to sink a Brexit deal that would treat Northern Ireland differently to the rest of the United Kingdom.

Supporting the minority Conservative government since the election result in June 2017, the DUP are aware of their influential position. But are they likely to follow through on this rhetoric as the Brexit deadline closes in?

The EU, along with the Irish and UK governments, have affirmed their commitment to having no hard border on the island of Ireland following Brexit. Yet, the different parties have translated the nature of the ‘backstop’ mechanisms very differently.

The ‘backstop’ is the EU’s insurance policy to ensure the border continues to be open if the EU and UK cannot agree a trade deal or technical solutions to facilitate the movement of people and trade after Brexit.

Disagreements regarding the nature of the backstop appear when considering the current negotiating red lines laid down by various players. Firstly, the Prime Minister has pushed for a backstop which is strictly time limited to prevent what Brexiteers have argued is a lock-in to a customs union which could last indefinitely.

Meanwhile the EU and Irish government have stated that any exit mechanism from the temporary customs union would have to be agreed upon to prevent the UK unilaterally walking away from any backstop settlement.

Secondly, disagreement exists on whether the arrangements under the backstop should apply to Northern Ireland or the whole of the UK. There is strong opposition from prominent Brexiteers in the Conservative Party for the whole of the UK remaining in a customs union with the EU.

Whilst the DUP’s vehement opposition to a backstop which treats Northern Ireland differently to the rest of the UK, has been marked as a ‘blood red line’ not to be crossed.

The DUP’s 10 MPs at Westminster have played an important role in supporting the minority Conservative government. Despite their size (1.5 per cent of all MPs), the DUP have demonstrated a willingness to flex their significance, as seen in December 2017 when the DUP’s refusal to accept regulatory alignment between Northern Ireland and the EU left Theresa May politically exposed, and caused the Brexit negotiations on the Irish border to be stalled.

Without an open border, products moving between Northern Ireland and the Republic would be treated the same as any other nation without a formal trade deal. Whilst the implementation of electronic systems of pre-registration have been suggested as a possible way to avoid any physical infrastructure at the border, these plans are yet to be clearly set out and are likely to be highly bureaucratic for businesses. For that reason a hard border, or a no deal Brexit, has the potential to be devastating for the Northern Ireland economy.

Yet, trying to understand the DUP’s position from the perspective of trade and economics is missing the point. Our research in 2014 on the DUP membership is revealing here; when asked what their single most important political issue was, protecting Northern Ireland’s place in the United Kingdom topped the list, far above the economy and NHS.

European institutions have been a constant site of opposition for the DUP. Not only has the party been consistent in its euroscepticism, particularly on the basis of membership undermining national sovereignty, Europe has also provided a physical site for DUP protest.

Reverend Ian Paisley, DUP founder, leader and MEP for 25 years, was ejected from the European Parliament on several occasions, most notably for heckling during a speech by Pope John Paul II with calls of ‘antichrist’. As DUP leader, Paisley was also notorious in opposing any compromise, using the cry of ‘no surrender’ to those ready to ‘betray’ Northern Ireland.

The DUP’s strong rhetoric and steadfast attachment to a negotiating position continues in the current context. Evoking his father’s memory, in the House of Commons DUP MP Ian Paisley Jnr. recently made a call of ‘no surrender’ in relation to EU negotiations.

A DUP source is also reported to have warned, ‘this is a battle of who blinks first, and we have cut off our eyelids.’ Efforts to interpret the DUP’s unapologetically brash style and intransigence has lead to hasty comparisons with Trump and UKIP.

Despite this strong rhetoric, the recent past has provided examples of how the DUP’s firm positioning has eventually translated to compromise. Most notably, after spending decades opposing any concessions to Nationalists and Republicans, the DUP stunned many by signing the St Andrews Agreement in 2006, consenting to power-sharing with their historic enemy, Sinn Fein. ‘Eventually’ is an important word here.

Those who have been involved in negotiations with the DUP in the past have recounted the party’s willingness to take their time and push deadlines until the best possible deal is on offer that they can sell to the party grass roots.

Unlike the negotiations which finally resulted in the DUP entering a power-sharing government, there is a clock ticking down to Brexit. The luxury of time is not on offer, placing growing pressure on Theresa May to blink first.

By Dr Sophie Whiting, Politics Lecturer at the University of Bath.