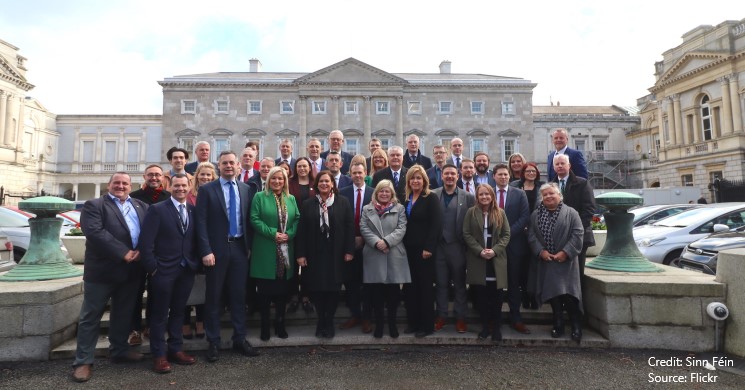 Sinn Féin secured 24.5% of first preference votes at the general election held in the Republic of Ireland on 8 February 2020. The result was the culmination of a remarkable surge in support for the party which secured just 14% of the vote at the 2016 general election and under 10% at the local elections in May 2019.

Sinn Féin emerged as the most popular party by votes, but it was narrowly pipped for the top spot of seats in parliament by Fianna Fáil – which gained 38 seats to Sinn Féin’s 37.

In an interesting irony, the additional seat held by Fianna Fáil stems from the automatic re-election of the speaker of parliament under the Irish system, who hailed from Fianna Fáil in the last parliament.

The sharp increase in the Sinn Féin vote was accompanied by a notable contraction in votes for Fianna Fáil and Fine Gael, the two parties who have governed Ireland alternately for the last century. Now, Fianna Fáil has 38 seats and Fine Gael 35 in the 160 seat parliament.

Neither can govern alone; they refuse to govern together given their historical origins and near century-long political competition; and both reject any government agreement with Sinn Féin – arising from its vexed past connections to the Irish Republican Army and wide policy divergences.

Nine days on from the election, government formation has become a mathematical conundrum to which there is no immediate solution.

Origins of the Sinn Féin surge

Sinn Féin secured its first seat in parliament in the Republic (in modern times) in 1997 and it experienced slow but steady growth in its vote share and seat numbers, until its sizable leap forward in 2020.

The party was very vocal in its criticism of the fiscal retrenchment policies pursued during the economic crisis years of 2008 to 2014, and there were notable elements of left-wing populism in its approach to politics and elections during this time.

It adopted a strong anti-establishment narrative and advocated simplistic solutions to the country’s deep banking crisis. It also secured strong support from voters with a populist disposition at elections in 2011 and 2016.

There is much discussion of the reasons for the increased attractiveness of the party in the 2020 election. Most agree that the party’s success is rooted in domestic issues and its strong critique of the outgoing government (led by Fine Gael) and the confidence and supply arrangement (provided by Fianna Fáil) which kept it in power.

The party has moderated its anti-establishment critique somewhat while retaining some of its more general left-wing populist ideas, such as ‘taxing the rich’ and a uniquely Irish left-wing policy of ‘abolishing the local property tax’.

Some further insights can be gleaned from the exit poll carried out on polling day.

Housing and homelessness were cited by 38% of Sinn Féin voters as the most important issue in shaping their vote decision. The Republic is experiencing an acute housing shortage which has led to rapid increases in rent prices and a surge in the number of people presenting as homeless in local authority areas.

Sinn Féin’s housing spokesperson, Eoin Ó Broin, is one of the most prominent members of parliament and was at the forefront of debates on housing and other issues. The main opposition party, Fianna Fáil, failed to have much impact in debates, and opinion polls during the campaign showed that voters trusted Sinn Féin more than any other party to deal with the housing issue.

Generally, quality of life issues were to the fore during the campaign and health, transport and childcare all featured in debates.

The leader of Sinn Féin, Mary Lou McDonald was judged to have performed very strongly in all of the television debates. The exit poll confirmed that a higher proportion of Sinn Féin voters (61%) indicated that the party leader was very important in shaping their vote choice.

Implications of the Sinn Féin surge

It is not yet certain whether Sinn Féin will shape politics from the government or opposition benches.

But it will be a force to be reckoned with in the coming parliamentary term. If in government, the party will demand greater government intervention in key sectors of the economy, more attention to the national question (of Irish unification) and movement on issues on that dimension that it has long championed such as votes for Irish citizens living outside the state (which would include Northern Ireland).

This shopping list explains in part why its negotiations to enter government may not succeed, as its difficult past and policy demands make it an uninviting coalition partner.

In which case, Sinn Féin may yet emerge as the main opposition party, where it will likely be a vocal and truculent force, pushing a strong line in Brexit negotiations and proving unyielding criticism of the government’s economic and social policies.

Sinn Féin is often described as playing the long game in Irish politics. It will be disappointed if it fails to enter government.

But it probably also appreciates that being in government has become a bruising experience in Irish politics: Fianna Fáil, Fine Gael, Labour and the Greens have all been on the receiving end of brutal electoral punishments in the last decade.

A term in opposition may yet allow Sinn Féin to emerge as the largest party not just in vote numbers but also in seats in parliament.