Sir Jeffrey Donaldson and the DUP: parties, polls and promises 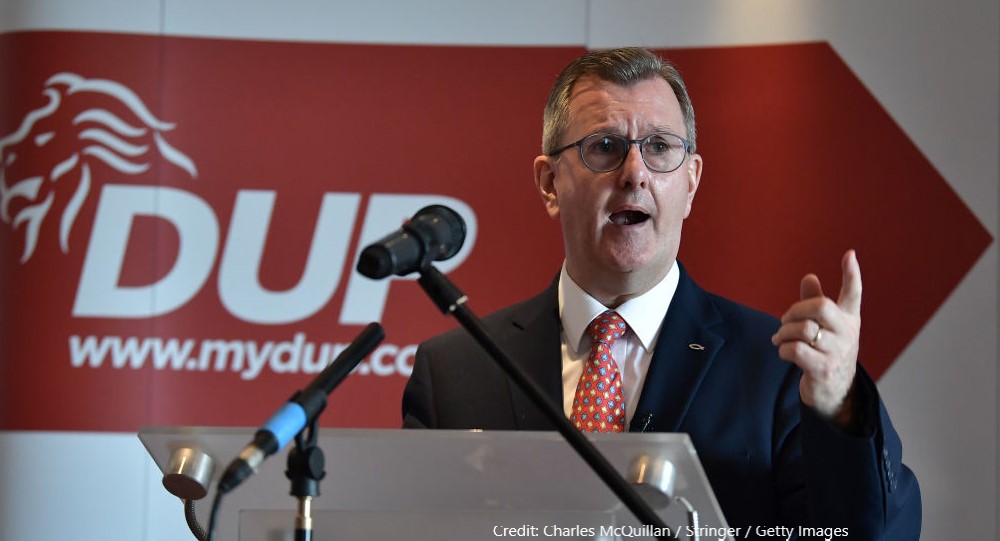 On 30 June, the Democratic Unionist Party confirmed Sir Jeffrey Donaldson MP as their new leader – the fifth in the party’s 50-year history and the third to hold the post in just three months.

In his first speech as leader Sir Jeffrey Donaldson characterised the Northern Ireland Protocol as ‘a threat to the economic integrity’ of the UK, and warned of the risk that its implementation poses to ‘the stability of the political institutions’ for devolved government in Northern Ireland.

That same day the High Court in Belfast rejected an application for judicial review challenging the lawfulness of the Protocol.

The case, Re Allister and Others, was brought by a cross-party group of unionist politicians including former leader of the DUP, Arlene Foster, former leaders of the Ulster Unionist Party (UUP), Steve Aiken and David Trimble, leader of the Traditional Unionist Voice (TUV), Jim Allister, and leading Brexiteers, Kate Hoey and Ben Habib.

The presiding judge dismissed all arguments raised by the appellants and ruled that the Protocol was, indeed, lawful.

Later in the same day, the EU granted an extension to the grace period for checks on certain chilled meat products moving from Great Britain to Northern Ireland, following the UK’s request to do so, thereby averting (or at least postponing) a so-called ‘sausage war’.

Additionally, the EU set out a ‘package of measures’ to address some of the ‘most pressing issues’ related to the implementation of the Protocol including on medicines supplies, guide-dogs and the movement of livestock.

Collectively, the developments on this one eventful day serve to underline the uncomfortable and unenviable situation of unionist politicians in Northern Ireland today, in particular, those in the DUP.

Parties: a challenge of leadership

Headlines in Northern Ireland have, over the last three months, been dominated by a high-speed, high-stakes drama unfolding in the upper echelons of the DUP.

On 28 April Arlene Foster announced her intention to resign her position as First Minister and leader of the DUP after 24 of her party colleagues signed a letter of no confidence in her leadership.

On 14 May Edwin Poots, Northern Ireland Minister for Agriculture, was elected as the new leader of the DUP receiving 19 votes to his opponent, Sir Jeffrey Donaldson’s, 17.

Unconventionally, Poots had committed during his campaign to remain as Agriculture Minister, if elected, and appoint a colleague to the position of First Minister.

On 14 June Arlene Foster formally stepped down as First Minister. In Northern Ireland’s power-sharing government, if either the First or deputy First Minister resign, their counterpart must follow suit, and there follows a seven day period during which the two parties must nominate replacements.

On 17 June Brandon Lewis, Secretary of State for Northern Ireland, brokered an agreement between the DUP and Sinn Féin leadership over the introduction of legislative provisions for the Irish language.

This cleared a path for Poots to nominate Paul Givan to be the new First Minister – but unhappy with the agreement on Irish language, 24 of the 28 DUP MLAs voted against Givan’s nomination.

Poots went ahead regardless, and later that evening, he resigned as leader after just 21 days.

On 26 June Sir Jeffrey Donaldson was endorsed as the new DUP leader.

He stated his intention to become First Minister in future, but to do so Sir Jeffrey Donaldson would need to resign as MP for Lagan Valley, thereby triggering a parliamentary by-election.

This would, however, be a risky choice given the DUP’s poor performance in recent polls.

According to a poll carried out in late May, DUP representation in the Assembly could drop by as much as 16% at the next election, with the party losing support to the more moderate UUP (+14%) and more hard-line TUV (+11%), both of whom have been vociferous critics of the DUP’s handling of Brexit and the Protocol.

Such findings make for difficult reading for the newest DUP leader, who made removal of ‘the Irish Sea Border’s pernicious impact on our trading and constitutional position’ a top priority for his first few months in office.

Northern Ireland politicians have very little power to influence how the Protocol is or is not implemented, however. Under the EU (Withdrawal) Act 2018 (as amended by the EU (Withdrawal Agreement) Act 2020) the Protocol has direct effect in UK law; and, as per the ruling in Re Allister and Others, no pre-existing provision in domestic or international law prohibits this fact.

This puts into sharp relief the significance of the UK-EU’s most recent compromise to avoid a ‘sausage war’ because it suggests a commitment from both sides to implement the Protocol, at least in principle, while also continuing the search for ‘creative solutions’ to pressing issues.

By prioritising the removal of the ‘pernicious impact’ of the Irish Sea Border, the new DUP leader is at risk of making promises that are beyond his capacity to keep. For this reason, Sir Jeffrey Donaldson’s warning about the ‘stability of the [Stormont] institutions’ really matters.

If, after a resignation, nominations are not forthcoming from either party during the seven day window, the Secretary of State for Northern Ireland is obliged to set a date for an election.

These arrangements, essentially, make collapsing devolved government in Northern Ireland relatively easy. This is not likely to be true for much longer. On 12 May, the UK government introduced the Northern Ireland (Ministers, Elections and Petitions of Concern) Bill that contains provisions to change the current seven day period for new nominations to 24 weeks, with existing ministers remaining in office in a care-taker capacity.

While the Northern Ireland Bill is only at committee stage in the Commons, the timing of its introduction can perhaps be taken as a move on the part of the UK government to reinforce provisions for devolved government in Northern Ireland in anticipation of any attempt to bring Stormont down in the name of Protocol protest.