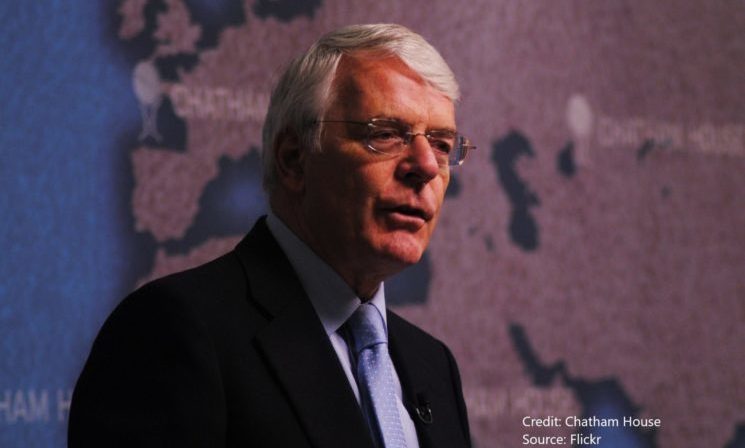 After two days of intense argument over the government’s motives behind the prorogation, the final day of the hearing was set aside for interventions by other ‘interested’ parties and responses by Lords Pannick and Keen.

Star billing undoubtedly went to the intervention by Sir John Major in support of Gina Miller’s action. Major did not address the Supreme Court himself – as appeal courts do not hear from witnesses – but Lord Garnier, the former Solicitor General, made the submission on his behalf.

Sir John Major’s intervention did not add anything new of substance to the legal arguments that the five week prorogation is unlawful and excessive.

However, the intervention was perhaps more eagerly awaited as it would bring the Conservative Party’s thirty-year melodrama over the UK’s relationship with the EU before the UK’s highest court.

After all, a former Prime Minister is accusing the current Prime Minister, from the same party, of being dishonest in proroguing parliament in order to avoid scrutiny during the period up to the 31 October Brexit deadline.

In his 10 page written submission Sir John Major states ‘The Court is under no obligation to approach this case on the artificially naïve basis that the handful of documents, the contents of which nobody has been prepared to verify with a statement of truth, should nevertheless be assumed to be entirely accurate and complete when even members of the Cabinet do not appear to believe them.’

Putting aside that in 1997 Sir John Major prorogued parliament 19 days before it would have been dissolved anyway to hold a general election, in order to avoid a debate on the damaging report in to the ‘cash for questions’ inquiry, this intervention should be seen as being about more than whether this prorogation is unlawful.

Going beyond the constitutional arguments about the relationship between parliament, the executive and judiciary, Sir John Major’s intervention demonstrates that this hearing is also a proxy fight over political control of the Brexit process and whether parliament or Boris Johnson’s minority government has control over parliamentary business in the days leading up to 31 October.

Cynics may say that, having got the Benn Act through parliament, against the wishes of the government, parliament now seeks to extend its influence over the Brexit process and negotiations.

Perhaps with one eye on future decisions by the government, this case could be seen as a pre-emptive strike to stop a further prorogation after parliament returns on 14 October, which could be timed to coincide with the Brexit deadline of 31 October.

In short, Sir John Major is saying that Boris Johnson cannot be trusted to abide by parliamentary rules and constitutional practices to ensure that parliament can fulfil its constitutional function and scrutinise the government in the run up to 31 October.

The point was reiterated in the afternoon session by Lord Pannick in his response to the submissions, but rebutted by Lord Keen, the Scottish Advocate General, who said that as prorogation is a constitutional convention and not legislated for by parliament, it is not justiciable.

In his view scrutiny of government would continue outside of parliament, when parliament is prorogued, but can this really be said to equate with parliamentary oversight during the five week period of prorogation?

The intervention by Sir John Major could be dismissed as sour grapes given the regular criticism of Major by Boris Johnson while he was a Daily Telegraph journalist in the mid-1990s.

However, that analysis would be too simplistic and it would be wrong to dismiss Sir John Major’s submission in that way. Since the referendum, and especially since Boris Johnson became Prime Minister, the Brexit debate has become characterised as ‘Parliament vs. The People’.

In this case parliament, supported by Gina Miller and Sir John Major, is being accused of stopping government from giving effect to the ‘will of the people’.

But, Sir John Major’s arguments are more subtle and this action should not be viewed as pitting parliament against ‘The People’.

Major’s arguments are that it is about ensuring that when, at some unknown point in the future Brexit no longer dominates the political agenda, the institutions of the UK constitution and especially parliament, which is at the core of representative democracy, is able to fulfil its constitutional role of holding government to account.

As Major sets out in his written submission, without some understanding from the Supreme Court of what constitutes lawful prorogation a Prime Minister could prorogue a future parliament ‘before the outcome of a confidence vote which his whips had calculated he would lose, for no reason other than to prevent it from being recorded that he had lost the confidence of the House such that he would need to resign’.

Three days of legal argument at the Supreme Court, representing all parts of the Kingdom, have not only tested the fitness for purpose of the UK’s constitution, but also brought in to sharp contrast the extent to which the Brexit referendum has divided the country in a manner that no other issue has done so before.

Sir John’ Major’s intervention and criticism of a Prime Minister from his own party for being dishonest is the ultimate manifestation of this division.

Rightly or wrongly, it will be the Supreme Court that decides whether the prorogation was lawful and after three days of legal argument we now await its decision and what, early next week, to hear what, if any order, it will make.

Ultimately, it could decide that prorogation is unlawful and that the government must request that the Queen recalls parliament immediately and parliament remains in session.

The final scenario envisaged by this document is that the Supreme Court could find the suspension was unlawful and that the recall of parliament before 14 October is the ‘only option lawfully open to the Prime Minister’.

However, this would require a Queen’s Speech, but this raises significant practical difficulties.

But, whatever the judgment, be under no illusion, the political landscape in the UK will not change.

In the coming days, leading up to 31 October, parliament and the country will remain as polarised as before on the question of Brexit and this judgment may serve an unintended purpose of reinforcing that division.

Covid-19 and British politics: what are the threats and opportunities?