The government’s White Paper, The Future Relationship with the EU: The UK’s Approach to Negotiations, has now been published, setting out the UK’s stall. Like boxers sparring, there’s a sense of nervous expectation prior to the outbreak of hostilities.

But the White Paper – not a ‘mandate’ as that would be way too ‘European’ – contains six key messages.

First and foremost, the UK expects to be treated as a sovereign state. The relationship is to be one ‘based on friendly cooperation between sovereign equals’. Further, and crucially, both parties must respect one another’s ‘legal autonomy’. This is important for the UK, where sovereignty has become the watchword.

But it is also important for the EU for which preserving its autonomy has become an article of faith. Yet there is a fundamental problem here – any trade agreement inevitably leads to some limitation on sovereignty – even a very thin ‘0, 0’ agreement (zero tariffs, zero quotas), since by definition it contains a restriction on a state’s ability to impose tariffs.

Second, the UK wants a comprehensive free trade agreement with a simple governance structure excluding the EU’s institutions. On top of that, it is willing to negotiate a number of ‘other agreements’ (such as fisheries, mobility, transport, law enforcement).

These agreements will be separate to the governance arrangements covering trade (there’s even a new set of numbering to emphasise the point). So, for instance, there is nothing on defence and external security in the UK proposals. Because that can be dealt with separately, as far as London is concerned.

In other words, the UK wants something which looks rather like the Swiss arrangement. The EU, for its part, hates the Swiss arrangement with a vengeance. It wants one package deal, not least to allow it to maximise its leverage in the talks – security cooperation will depend on an agreement on state aid. ‘Nothing is agreed til everything is agreed,’ in other words, is born a much out of self-interest as out of principle.

The EU also wants an overarching ‘governance’ mechanism, including a role for the ECJ itself where EU law is engaged. The UK is vehemently opposed, stating baldly that ‘there will be no role for the Court of Justice of the European Union in the dispute resolution mechanism’.

Third, the White Paper contains repeated references to the templates found in other EU trade agreements with ‘Canada and with other friendly countries’, such as Japan and South Korea (the word’ precedent’ is used nearly 30 times). The message is simple. Michel Barnier’s staircase slide led us to Canada.

So the EU should give us a bit of Canada and the odd bit of Japan. It is striking that the UK has gone from portraying itself as special under May to arguing it is totally like every other third country under Johnson. The EU seems to be moving in the opposite direction: the UK is now special because of its geography. 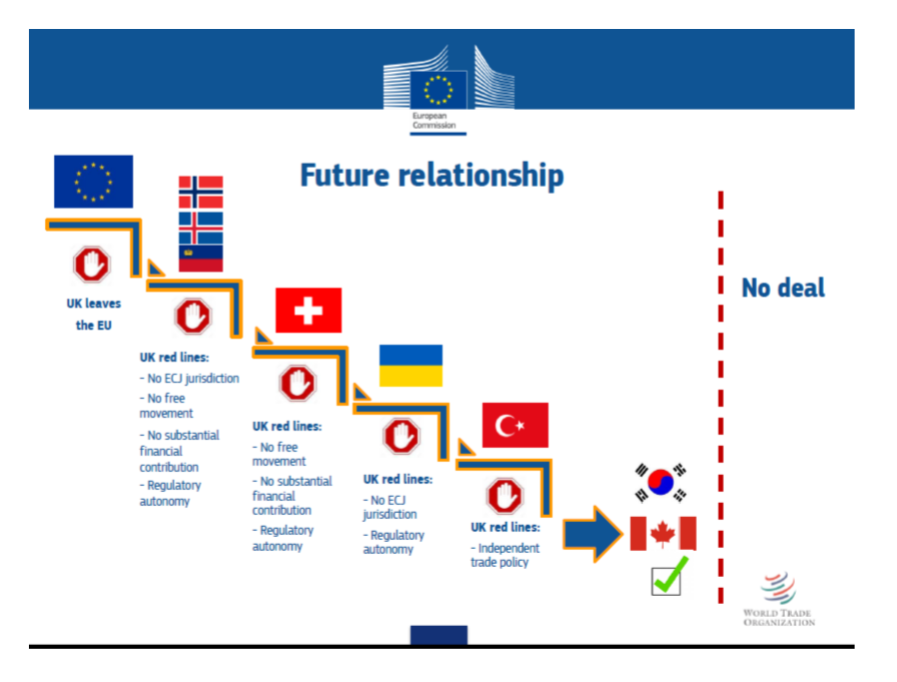 Fourth, there is the sensitive issue of ‘level playing field’ (LPF) obligations (not, of course, called that because it is an EU term – fair competition is preferred). The EU has always insisted that any free trade agreement must be subject to LPF conditionality because, unlike Canada, the UK is sitting on the EU’s border (as M. Barnier noted in another one of his slides).

For the UK, the solution is simple. The Agreement ‘should include reciprocal commitments not to weaken or reduce the level of protection afforded by labour laws and standards in order to encourage trade or investment.’ But – and herein lies the rub – ‘these provisions should not be subject to the Agreement’s dispute resolution mechanism’. In other words, the UK undertakes to comply with the obligations in a Canada-style agreement but if it doesn’t there won’t be a breach of the Treaty.

Fifth, there is a threat. The June ‘high-level meeting’, foreseen in the Political Declaration, will (might?) be make or break. If ‘the broad outline of an agreement’ is not in place, then ‘the government will need to decide whether the UK’s attention should move away from negotiations and focus solely on continuing domestic preparations to exit the transition period in an orderly fashion’.

As the government says, in these circumstances, ‘the trading relationship with the EU will rest on the 2019 Withdrawal Agreement [ie the Article 50 divorce text] and will look similar to Australia’s’. As a reminder, Australia does not have a free trade agreement with the EU. What the government seems to forget, however, is that Canberra is very keen to negotiate one, as the ‘Australia’ situation is not satisfactory.

Sixth, the UK wants to have lots of cooperation in ‘Law Enforcement and Judicial Cooperation in Criminal Matters’. Any cooperation will be underpinned ‘by the importance attached by the UK and the EU to safeguarding human rights, the rule of law and high standards of data protection’. So far, so good.

However, the ‘agreement should not specify how the UK or the EU Member States should protect and enforce human rights and the rule of law within their own autonomous legal systems’. So the UK recognises that there is a role for human rights protection. Unlike the EU, however, it does not stipulate that this should be achieved via the European Convention of Human Rights.

The White Paper is a more comprehensive document than many had feared. It sets out the UK’s ‘ask’ with admirable clarity. And it fizzes with self-confidence: ‘The vision for the UK’s future relationship with the EU has already been set out, successively, in the manifesto on the basis of which the government won the 12 December 2019 general election, and, subsequently, in the Prime Minister’s speech in Greenwich on 3 February’.

Which is all well and good. However, as with all things Brexit, the real test is not clarity on paper but whether the position the government has put forward will survive first contact with the EU.