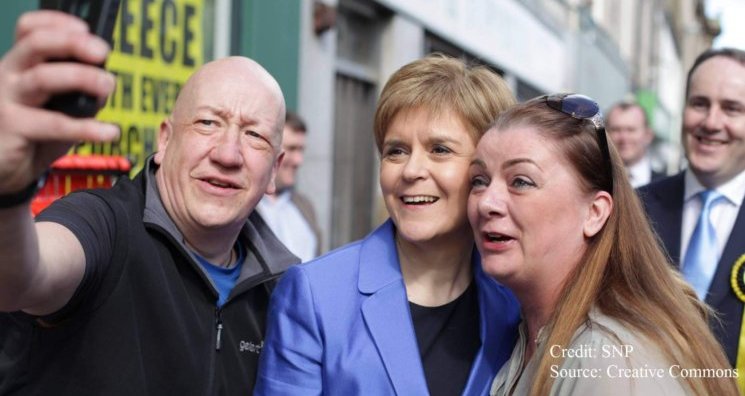 The SNP are noticeably quieter than in the 2015 General Election campaign. Back then the party (and its leader Nicola Sturgeon in particular) were all over the media. This was understandable – the party was riding on a high following the massive increase in membership after the 2014 Scottish independence referendum.

With all the signs pointing to a hung parliament, the press were focusing on the possible role of the SNP in a coalition government with Labour, something the Conservatives were quick to take advantage of in their own campaign material.  Sturgeon’s participation in the seven way leaders’ debate in 2015 saw her widely crowned as the ‘winner’, but her participation in the 2017 debate without Theresa May and Jeremy Corbyn lessened her impact.

This time the scenario at the start of the campaign was radically different, with Corbyn’s Labour party widely considered ‘unelectable’ and lagging far behind in the polls, while the Conservative party was not only expected to obtain a landslide victory UK-wide but also to be the most direct competitor in Scottish seats, including for some of the SNP’s top MPs.

In addition, the Scottish nationalists had to manage very carefully their plan to call for Indyref2, trying to fend off accusations of being instrumental (and obsessed with independence) in their take on the delicate issue of Brexit.

Thus they appear to have adopted a prudent and quieter approach, capitalizing on their records as a fiscally responsible and progressive party of government in Edinburgh, while at the same time having gained a reputation as a tough and relentless opposition party in London.

Indeed, their long-standing anti-Tory credentials have been cemented by the party’s work in Westminster over the last two years, where its MPs have regularly spoken up against cuts to disability benefit, tax credits and pensions. Their work on the so called ‘rape clause’, for instance, has caused problems for Ruth Davidson throughout the campaign.

Although the launch of the SNP’s manifesto was delayed following the Manchester attack, the document is clearly shaped around the expectation of a new Tory government. It talks therefore of “…the prospect of a re-elected and increasingly hard-line Conservative government at Westminster” (pg.1), and states that “we will not allow the Tory government to go unopposed” (pg 9).

While the Labour party (let alone the Lib Dems) is totally blanketed, the tried and tested anti-Tory and anti-austerity battle cries are all over. For instance, the phrase “Tory cuts” is used 11 times throughout the manifesto.

In contrast, the issue of Indyref2 has been noticeably absent from much of the SNP campaign and the party were forced to deny that they were divided over the issue. In the manifesto, it is dealt with in just half a page, where the party makes clear that an election result in line with that of the 2015 general and 2016 Scottish elections would constitute a ‘triple lock’ on the mandate to call for a Indyref2 “when the time is right and the options are clear”.

The constructive part of the SNP’s manifesto is also very interesting, as plenty of space is dedicated to UK-wide policies. Although the fiscal responsibility of the party is re-stated and some attention is devoted to wealth creation and attracting capital (pg 21), the bulk of the manifesto has an overtly redistributionist approach. Besides withdrawing their support to further reductions to corporation tax, the SNP also proposes a UK-wide increase in the additional rate from 45p to 50p.

It is worth noting that the latter policy can potentially expose the Scottish nationalists to criticism, as the SNP government refused to increase taxes on higher incomes in Scotland, although it has the powers to do so and in spite of considerable pressure from the Scottish Labour and the Scottish Greens.

Once all the daring pledges on increasing public spending on a wide variety of welfare services are considered, it becomes clear that this move to the left is not only a reaction to Tory austerity but also an attempt to avoid being outflanked by Labour.

And so we come to a discussion of possible scenarios as they appear in the immediate run-up to the election. With the launch of a bold social-democratic manifesto in mid-May, Corbyn’s Labour has not only managed to push some socio-economic issues back onto the agenda – such as an increase in the minimum wage – but it has also made a sharp recovery in the polls arguably with the help of the Tories’ rather masochistic campaign). From the SNP’s perspective, this substantive and largely unpredicted change in the pre-election context has turned Labour from a virtually negligible foe to one which has some chances to re-emerge as both a possible competitor in Scottish seats and a pivotal actor in a post-election hung parliament.

It is not by chance that Nicola Sturgeon decided to make a last minute appeal to voters not to cast their ballot paper for Labour, as this would risk splitting the anti-Tory vote to the advantage of Conservative candidates. At the same time, and in spite of remaining ‘sceptical’ of a hung parliament in this election, she has confirmed that the party would work with Labour and other parties in an anti-Tory progressive alliance. There is certainly lots of common ground between the two parties and, although both parties have ruled out a formal coalition, the SNP could support a minority Corbyn government on a policy-by-policy basis, which would include constitutional reforms, Brexit negotiations and, down the line, the issue of Indyref2.

There is no chance of seeing the SNP on the government benches later this week.  First, because a Tory victory is still the most likely outcome and, secondly, because in a hung parliament there will not be a formal government coalition which includes the SNP. Yet, it is highly unlikely that the SNP will lose its position as the third party in the UK Parliament. So we can expect much continuation in terms of the SNP’s work in the Commons: rallying against Tory cuts and involving itself in England-only policy issues if and when it chooses.

What will be most interesting to see is if – and how – the relationship between the SNP and the Conservatives evolves. If the Scottish Conservatives do manage to take the seats of some of the SNP’s rising stars (Angus Robertson, the party leader at Westminster, is especially vulnerable here), it will no doubt exacerbate the SNP’s anti-Tory message. Likewise, if the SNP are seen to be interfering in issues at Westminster which don’t concern Scotland it will muddy the waters even further with Theresa May and her colleagues in the Commons.  Thursday’s election will not be about whether or not we see the SNP leader walking into Downing Street, but the result for the SNP will certainly shape the path to a successful Brexit deal and, possibly, to a second independence referendum.