Social distancing and the Brexit divide 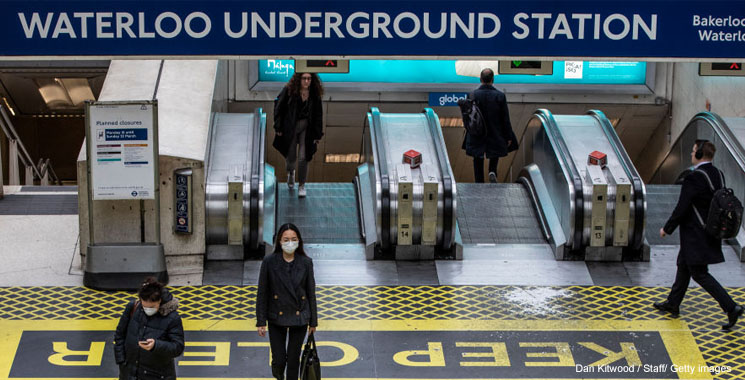 As we face our seventh week of lockdown, it is (exhaustingly) clear that coronavirus has led to the greatest change in everyday life for Britons since the Second World War.

But no lockdown is 100 per cent enforced. It is both impossible and undesirable to have the police monitor every movement or every citizen.

People are permitted to buy essentials and to exercise. And some people are essential workers and must continue their daily travel and interaction through the lockdown.

One thing we can do is look at data on the amount of “activity” going on in different types of places from Google’s community mobility reports. This is anonymous data sent to Google from people’s smartphones as they move around different locations.

Google uses six location types: groceries, parks, residential, retail and recreation, transit stations (railway stations, airports, Underground, bus stops and so on), and workplaces. And for 150 different localities in the UK, Google provides information on how much each type of activity has changed since February 29.

In a research note for UK in a Changing Europe, I look at how much different parts of the UK have engaged in different levels of social distancing. I show how this correlates closely with some familiar divides in British life: cities v rural areas, rich v poor areas, and Remain voting areas v Leave voting areas.

Everywhere in the UK has social distanced massively. No locality has cut workplace activity by less than half, but some have cut going to work much more than others.

When we use a statistical model to account for the effects of region (are you in London, or the East Midlands, or Scotland?), the age profile (over-70s and under-30s), income per head and population density, the predictor that jumps out as strongest is a locality’s vote in the Brexit referendum of 2016.

Examining the data we see a strong negative relationship between the percentage voting for Remain and activity measured by Google in workplaces. Remainy places have, on average, social distanced more. 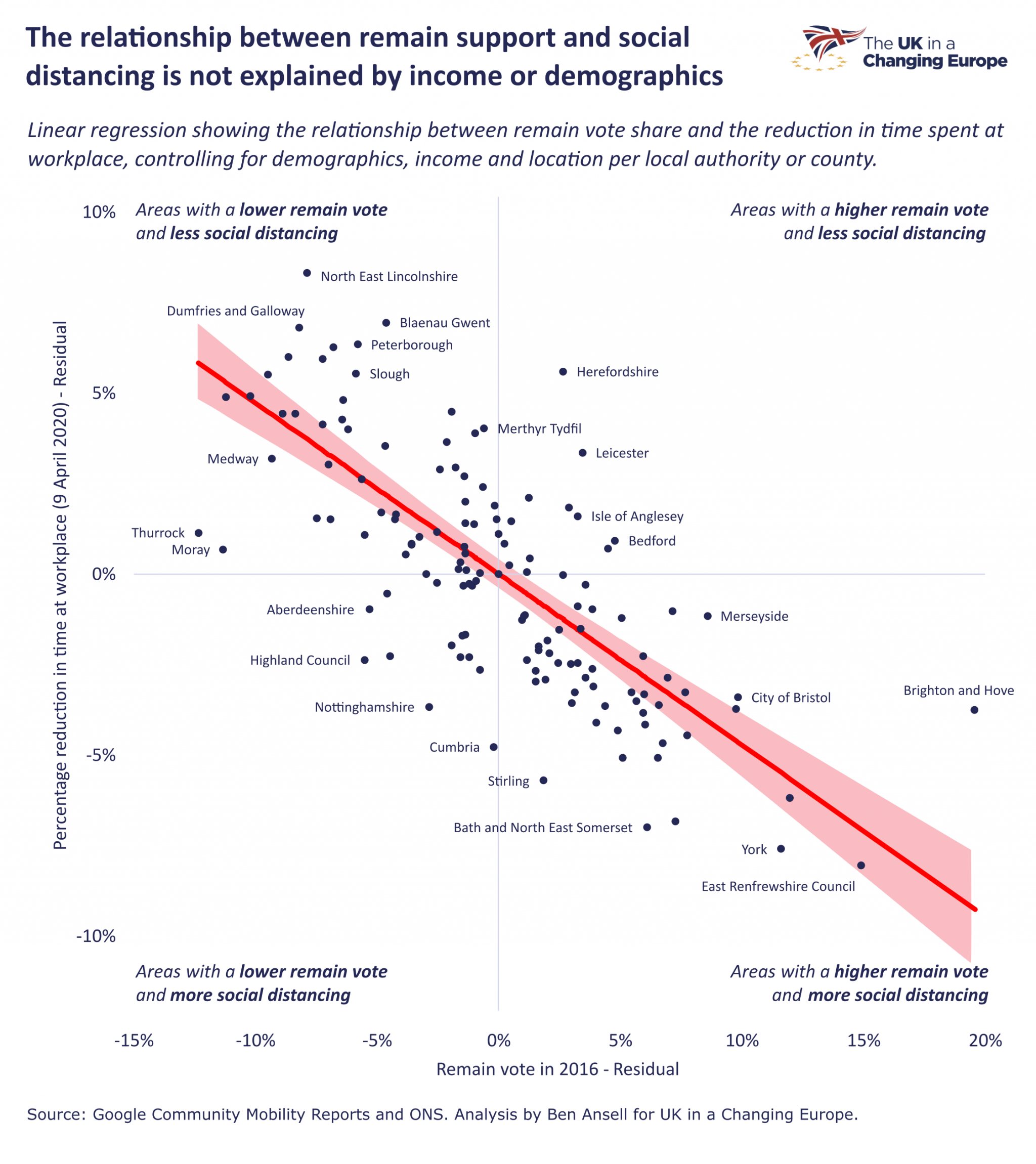 How can that be? It might be that people living in Leave-voting areas are more likely to be key workers and so cannot work from home. Or it could be that Remain-voting areas have more “knowledge workers” and professionals, who find it easier to work from home.

Or it could reflect differences in attitudes towards the lockdown between voters, although most survey evidence so far does not find this pattern.

Maybe this is all about April 9, the day of the data we analysed. Maybe that’s a weird day. What does the pattern look like over time? And how about other types of activity?

So we did the same analysis for each day since February 29 and for each activity in groceries, parks, residential, retail, and transit, as well as workplaces. 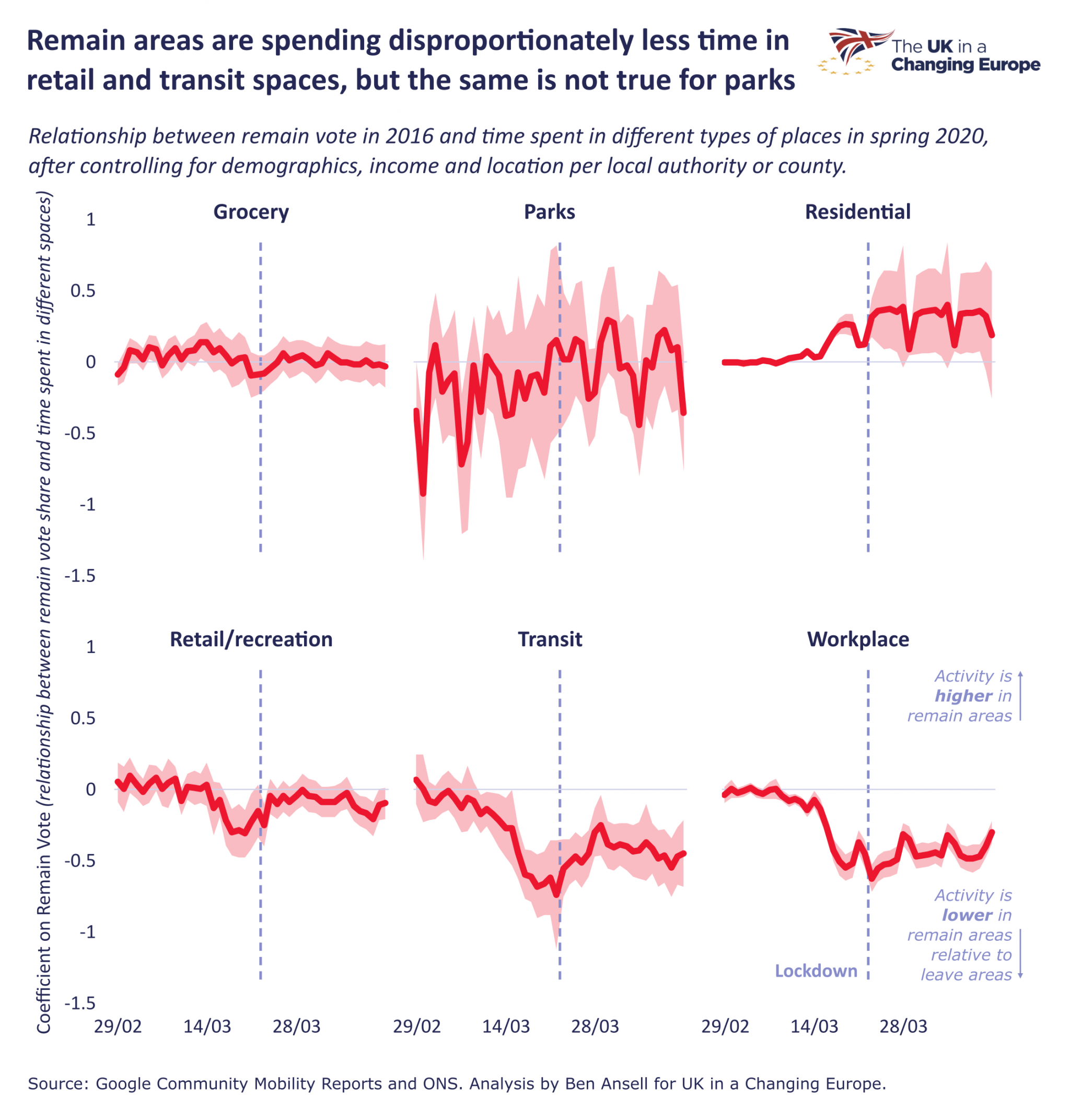 Again we see that for activity in workplaces and transit stations, the gap between Remain and Leave areas opened up about a week before Boris Johnson announced the official lockdown and has remained large since.

It also looks like since before the lockdown, Remain areas have seen more residential activity and less retail shopping. But there’s no difference in parks or groceries.

So it’s not the case – as those photos of London parks indicate – that people in Remain areas are staying in much more than everyone. But they are at work less and perhaps avoiding city centres and transit stations more.

What does this tell us? As before, it’s really important to note that everywhere has social distanced dramatically. There are no bad actors here. But there are differences in the degree of social distancing, at least relative to the baseline.

That could be because of different levels of starting activity, but it could also be related to demographic, economic and political factors.

The Brexit divide that has shaped much of British life over the past half-decade is indeed showing up here.

What are the implications? If Remain areas are able to social-distance more – probably due to being able to work from home more easily, but potentially also related to different underlying attitudes – this could widen Britain’s social divisions.

It is not hard to imagine resentment building over the fact that in some places everyone seems to be working from home, whereas in others people have to head into work, putting themselves at risk.

Or viewed the other way, there could be resentment that some people feel they are abiding by the lockdown, whereas others are following it more loosely.

There is no right or wrong here. Most people are doing their very best. But we have already seen from media coverage that mixed compliance with the lockdown leads to moral outrage.

And the economic shocks from Covid-19 are likely regionally to be very unequal, just as were the effects of the credit crisis. Anything that further widens Britain’s already sharp divides should give us cause for concern.

By Ben Ansell, professor of comparative democratic institutions at Nuffield College and the University of Oxford. This piece was originally published in The Times and is based on research from Ben’s paper, What explains differences in social distancing in the UK?