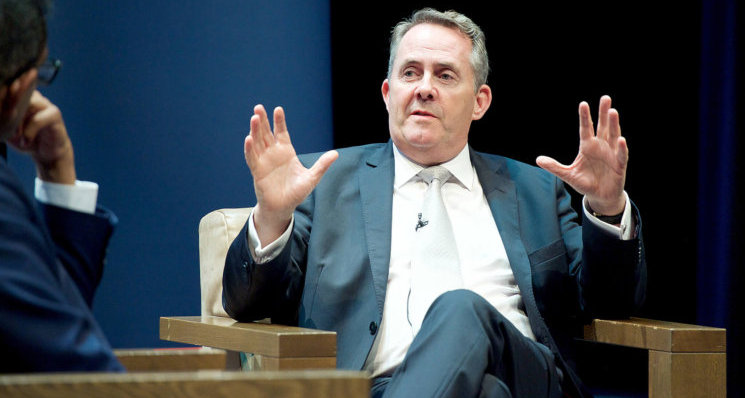 Fox hopes for increased trade with far flung nations post-Brexit—but there’s a problem with his strategy.

Geography no longer matters in international trade. This is the view of International Trade Secretary Liam Fox, who has said that we now live in a “post geography trading world.” New technology in transport and communications “has reduced the barriers of distance and time,” making proximity less relevant in the modern trading era.

What is more, goes the Fox view, the UK is a mainly services economy, and exports of such services, like accountancy, advertising and consulting, are more mobile than traditional goods. This is because these services can often be delivered remotely, so geographical location is less of a barrier.

The UK’s comparative advantage in many services means it is ideally placed to export more of them when freed from the regulations of the EU single market.

The theory goes that the fast-growing regions of the world have demand better suited to UK services expertise than Europe, whose services-based economies are similar to the UK’s.

Developing economies may have an advantage in manufacturing and production, with cheap labour and natural resources, but they lack the services expertise in which the UK specialises.

In particular, Liam Fox has his sights set on the economies of Asia. Indeed, the IMF’s latest World Economic Outlook report projects emerging and developing Asia as heading for 6.5 per cent growth in 2017‑18, falling to only 6.3 per cent by 2022—easily the strongest growth region in the world.

The conclusion is seemingly a simple one: once the UK has left the EU, it should reorient its trade to the areas of the world that require UK expertise and are growing rapidly.

Unfortunately, it is not so simple. For a start, the UK’s goods exports are worth a similar amount to its services exports. Although services dominate the economy as a whole, the external economy is more evenly split, as much of the services sector is inward-facing.

Moving physical items over distances therefore remains an important challenge for UK producers, not overcome by developments in communications. Neither distance nor time has disappeared.

More importantly though, the effect of distance on trade is one of the most reliable theories in economics. It is known as the gravity theory of trade, where the further away an export market is the less trade there is between markets.

Distance has been shown systematically to continue to have a negative impact on trade. This pattern is clearly evident in the UK’s exports of both goods and services.

As the chart above shows, most of the UK’s major trading partners are clustered in close proximity. According to World Bank data, about 56 per cent of the UK’s good exports go to Europe and Central Asia, below the regional average of 70 per cent.

The US, China and Japan are anomalies because of their size, Saudi Arabia and the UAE are mainly commodities relationships, and others such as Canada, Hong Kong and Australia derive in part from historical and cultural connections. The major pattern, though, is distance.

Although distance is a reliable predictor of international trade patterns, it is still not fully understood why this remains the case in spite of advances in technology and communications, which in theory should have reduced barriers to trade and made distance less relevant.

One suggestion is that firm size is important. The larger a firm the less of a barrier distance becomes because such companies have dense global supply and customer networks. For smaller firms, however, distance remains an important hurdle.

Therefore, if the distribution of large and small firms remains stable then distance is likely to remain a constant barrier to trade. Given that 99 per cent of UK private-sector businesses are small businesses, they are unlikely to have the ability to easily reorient globally once the UK leaves the EU.

Other explanations of distance effects are that the composition of industries is changing to ones with higher distance effects, that advances in technology haven’t significantly altered the marginal cost for trade in goods and that as transport costs have reduced firms may have begun to trade in more sophisticated goods with higher transport costs, offsetting cost gains from technological advances.

Patrick Minford, a member of the Economists for Free Trade Group, has criticised the gravity theory for being “neo-protectionist” in that, he says, it leads to the conclusion that EU markets should be protected, as distant markets are difficult to break into.

He says, “In the gravity model the only reason for the rise of an industry is contiguity to a market where it is demanded.” This is clearly not the case.

The theory states that distance has a consistently negative impact, not that it is the only factor determining competitive advantage. The average estimate is that a 10 per cent increase in distance lowers trade by about 9 per cent. The gravity model is an observation of trade patterns, not an explanation for them. Many of the reasons for these patterns are still up for debate.

It is, of course, a laudable aim to want to diversify and expand the UK’s trade markets in order to maximise income, spur investment and exchange expertise. Already, the UK exports to regions outside Europe to a greater extent than other EU members.

Switzerland is also a good example of a European country that has developed close trade ties with Asia. However, it has done this while maintaining a close relationship with its most important market, the EU.

There is no doubt that the markets closest to the UK, the majority of which are in the EU, remain the most important, and there is no historical precedent to suggest that leaving a trading bloc automatically allows a country to reorient its trade. Distance remains an undeniable fact that cannot be imagined away.

Like it or not, the UK cannot pick itself up and head off to south-east Asia, as tempting as that might seem in the midst of a British winter. The most reliable policy for the government would be to maintain the closest trade relationship possible with the UK’s neighbours.

Given that the optimal version of this relationship—single market and customs union membership—has been ruled out, the nearest equivalent is essential as the first priority.

By Matt Bevington, research assistant at The UK in a Changing Europe. This piece originally featured on in Prospect.