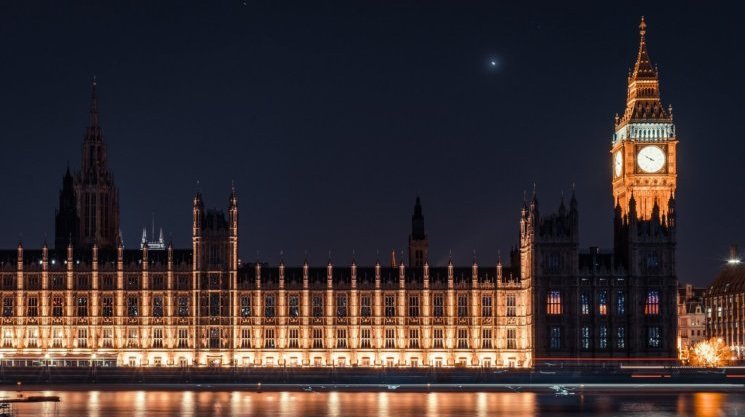 Possible post-Brexit relationships between the UK and the EU are usually categorised in terms of two ideal types.

The hard Brexit position can be summarized in the words of the Conservative Party’s Eurosceptics such as Jacob Rees-Mogg, who has said that “if the ECJ still has jurisdiction we will not have left the EU… it is perhaps the most important red line in ensuring the leave vote is honoured”.

Boris Johnson and Michael Gove have also made clear their “ambition to be a fully independent self-governing country by the time of the next election”.

On the other side, Leader of the Opposition Jeremy Corbyn told the United Nations “We want to see a close and cooperative relationship with our European neighbours … based on solidarity as well as mutual benefit and fair trade”.

The key issues on the hard side are sovereignty and control, whilst those on the soft side are collaboration and trade. These issues, within the constraints of the negotiations, are usually considered to be tradeoffs.

For example, having access to the single market would necessarily involve acceding to EU market regulations, thereby relinquishing some control. But how do the two opposing ideals play out in the minds of the general public?

To explore this question, we use data collected online by Kantar Public between 10 July and 2 August 2017. We asked our respondents to imagine themselves at the negotiating table. For each of the key areas of negotiation we asked them to say whether they would make a deal, budge, or whether this issue would be a red line.

The structure of our question does not force respondents to make trade-off, meaning they can chose both the single market and sovereignty if they please. Indeed, as other studies have also found, many do.

Using a method known as factor analysis, we use the inter-relationships between these seven items to reveal hidden attitudinal dimensions (or ‘factors’).

What emerges quite strikingly from the data are two factors, the first of which looks very much like the archetypical hard Brexit position. Like Rees-Mogg, Johnson, and Gove, it relates most strongly to sovereignty followed by budget contributions and free movement. This we label the ‘Sovereignty Factor’.

The second factor relates most strongly to scientific collaboration followed by access to the single market and citizens’ rights: this, echoing Corbyn’s words, we label the ‘Cooperative Factor’.

We find a correlation of 0.44 between these two dimensions, meaning there is a moderate tendency for people who score high on one, to also score high on the other (and vice versa, to score low on both).

The moderate correlation implies that the two dimensions are not opposites. Some individuals want to have their cake and eat it, favouring both sovereignty and cooperation.

As we show in Figure 1, age has a similar effect on both dimensions. Older people tend to score higher on the Sovereignty Factor, but also on the Cooperative Factor. Other demographic Factors that predict higher scores on both factors include being female and being in a financial situation below ‘living comfortably’. 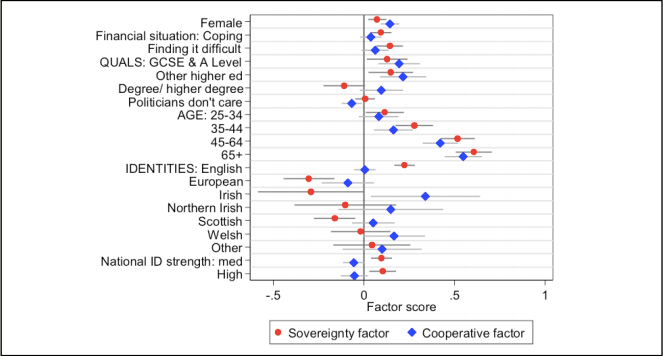 Identity has had a prominent place in explaining Brexit-related opinion, where a local and traditional outlook (Englishness) has been pitted against a more trans-national outlook (Britishness, Europeanness). Here we do see differences between the two dimensions: Englishness is associated with a preference for sovereignty, while Scottishness and Irishness are associated with preferences for lower sovereignty and higher cooperation.

Education, another indicator of cultural position, shows an interesting pattern. Those with mid-range qualifications score higher than those with no qualifications on both sovereignty and cooperation. At degree level, however, we see a divergence: degree holders want cooperation but no sovereignty.

Our evidence strongly suggests that the soft-hard Brexit distinction plays out in the minds of British people as two dimensions that are only moderately related. Older people and those with mid-range qualifications want both more sovereignty and cooperation; conversely those with non-English national identities and degree-holders follow the political separation, and prefer more cooperation but less sovereignty.

By Professor Anthony Heath, Brexit research leader and Dr Lindsay Richards, co-investigator at The UK in a Changing Europe. You can find a full copy of our Brexit and Public Opinion report here.