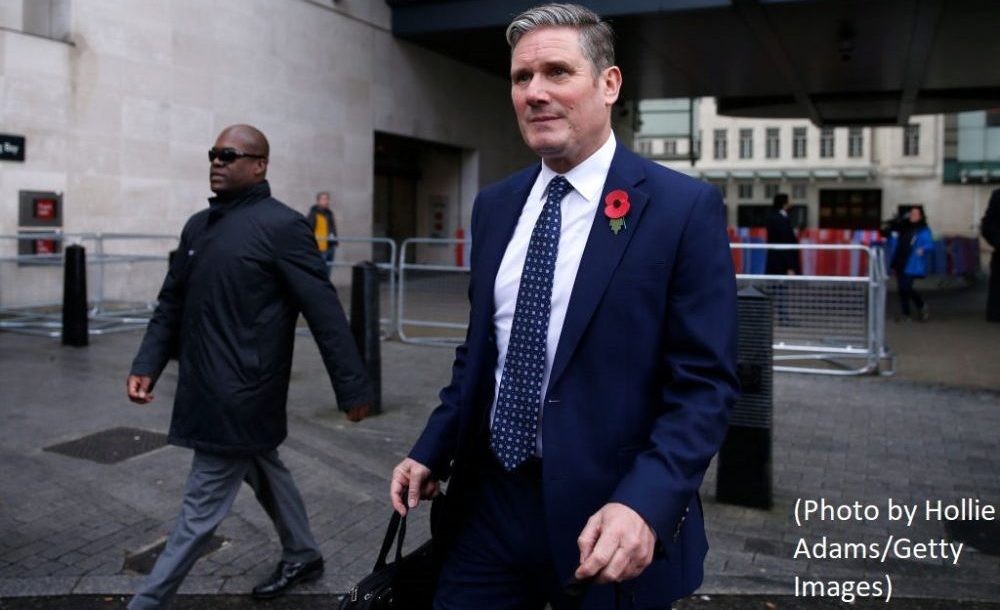 “Get Brexit done.” It worked a treat as an electoral slogan for Boris Johnson. And it has now been taken up by his tormentor-in-chief, Keir Starmer.

“Stop Banging on about Brexit and defeat Covid,” was the headline on a recent column by the Labour leader for the Telegraph. It’s clear enough what Starmer is trying to do. But he may be missing a trick.

For a party anxious to win back those “Red Wall” seats lost in part, if not mainly, as a result of Brexit, emphasising a desire to get the job done makes sense.

All the more so given Starmer’s role in engineering the Labour shift towards support for a second referendum.

The Prime Minister, for his part, is keen that people do not forget this – note his repeated attempts to portray the opposition as “Islington Remainers”.

This doesn’t mean, however, that Labour wants to forget about Brexit altogether. After all, a failure on the part of the government to secure an agreement with the EU slots nicely into the party’s umbrella messaging: the Prime Minister’s lack of competence.

Again, Labour strategists can be reassured by the evidence. Focus groups conducted by Will Jennings and his team at the University of Southampton, with UK in a Changing Europe, found that support for the government on Brexit – and it still retains a significant lead on the issue in opinion polling – is contingent (for No 10, dangerously so) on Johnson’s “oven-ready” deal being cooked through and easily digestible.

But there are dangers for Labour, too. After so much will-they-won’t-they, even a thin deal with Brussels could be spun by the government as a triumph.

Johnson, after all, pulled off this trick off last year, selling his acceptance of terms his predecessor had rejected outright as a heroic success against all the odds.

Labour, given its focus on the dangers of no deal, might struggle to effectively point out the shortcomings of whatever is agreed.

Should an agreement be signed, it is not obvious how Starmer could effectively criticise the Prime Minister for its contents.

And shortcomings there will be. Modelling carried out by Thomas Sampson of the London School of Economics underlines that, even if a deal were to be signed, the medium-term economic impact of Brexit will be more severe than that of the pandemic.

So limited is any agreement that the government is prepared to sign that much of the disruption we have come to expect in the event of no deal will occur regardless of the outcome of the negotiations.

The lorry parks being constructed will be necessary whatever happens in the coming weeks. A deal, in other words, will be economically damaging and disruptive. And these impacts will be felt for years to come.

The challenge for Labour lies in pinning these impacts on the government’s approach to the negotiations.

The prize is the support of voters who backed Brexit but who may suspect it has not been delivered effectively and competently.

One route to Downing Street for Starmer runs via an ability to divide the Leave coalition Johnson so skilfully assembled last December.

How might he do this? It makes perfect sense for an opposition party to refrain from committing itself to specific policy proposals at this stage of the electoral cycle. There is no need to spell out the precise terms of a Labour Brexit outcome.

What does matter, however, is that the party emphasises that different forms of Brexit are still available and that the one this government will likely choose will have particularly damaging economic impacts.

And as with Starmer’s strategy on a Covid-19 circuit-breaker, this will require a sense not just that the opposition has a critique but that they have a plan for how they might, were they in charge, be doing things differently.

A key – and indeed urgent – goal for the opposition, therefore, must be to craft a narrative that lays the blame for an adverse economic outcome squarely at the feet of the government’s rejection of the type of Brexit Labour would have negotiated.

This is likely to mean a more policy-rich offer on Brexit than the Labour front bench is currently willing to commit to.

Simply talking about a Brexit that is good for jobs and investment won’t hack it, and is up there with the worst of the Corbyn-era trite clichés.

That said, the main job of the opposition is to oppose – to find fault with the government wherever it can.

If the Johnson administration cannot prevent highly visible Brexit-related economic disruption – and all the signs are that this is coming, whether a deal is reached or not – the government will be open to a charge from Labour that it is not doing everything possible to steer the economy to safety.

“They failed to fix the roof while the sun was shining” proved a powerful metaphor for the Cameron-era Conservatives when in opposition after 2005, enabling them to lay the blame for the 2008 recession firmly at the feet of the government. Now Starmer and his team must attempt the same trick.

In some senses, they have an easier task. The downturn that occurred in Britain at the end of the first decade of the 21st century was hardly solely the fault of Gordon Brown and his cabinet colleagues.

When it comes to the economic costs of Brexit at least, Johnson and his crew have arguably no one but themselves to blame.

By Anand Menon, director of UK in a Changing Europe and professor of European politics and foreign affairs King’s College London. This piece originally featured in New Statesman.