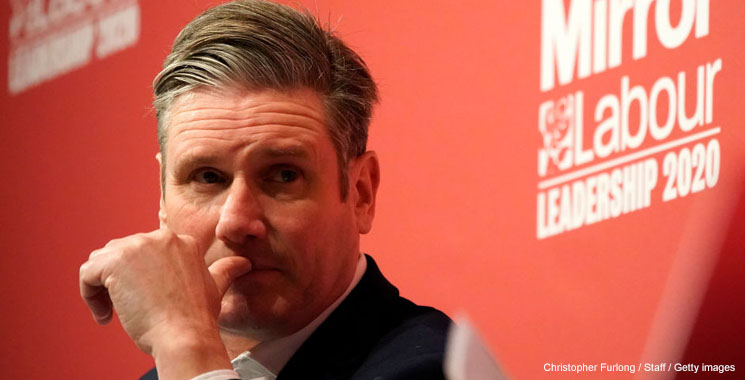 It hasn’t been plain sailing for Labour’s new leader Keir Starmer. Battling the ongoing factionalism in the party laid bare by last week’s report, whilst crafting an appropriate response to the Covid-19 crisis, keeps a man busy.

But as one crisis dominates, another may be looming, as we count down to the end of the transition and therefore the end of free movement. Starmer’s tenure may mark an opportunity for Labour to tackle – and maybe even triumph over – the thorny issue of immigration. But it may also open a rift that Starmer is desperate to close.

Immigration was and is a key Brexit battleground. And it has long proved a headache for Labour, caught ideologically between its protectionism and its internationalism, and splitting its electoral coalition between the so-called beer and wine drinkers.

The challenge posed to Labour by immigration came to the fore in the wake of Tony Blair’s Janus-faced managed migration regime, which distinguished between those the government deemed good and bad, expanding work related immigration whilst restricting so-called unwanted immigration.

A key turning point was in 2004 when Blair’s Labour government decided not to place transitional controls on new EU states from central and eastern Europe – a decision that soon came to haunt the party as the public recoiled against the resulting wave of migration.

During the decade that Labour has been in opposition, immigration has proved a circle it has been unable to square.

Under Miliband apologies were plentiful; mugs pledging to control our borders were commissioned.

Desperate to disassociate the party from the legacy of that 2004 decision, Miliband (unsuccessfully) walked the tightrope between the Conservatives’ ‘all migration is bad’ line and the free market liberal approach of their Labour predecessors.

Corbyn wanted to “tackle the real issues of immigration” such as “taking action against undercutting of pay and conditions, closing down cheap labour loopholes and strengthening workplace protections”.

His strategy was to reduce immigration by transforming the labour market, essentially aiming to decrease labour market flexibility. It did not prove to be much of a vote winner.

How a Labour government would handle immigration has become a question in Labour’s soul searching since 2010. Finding the common ground on free movement in particular has been a particular challenge.

Starmer himself has remained relatively quiet on immigration so far. Back in October 2016 he toed the Labour line that immigration needed to be reduced. But as the leadership race commenced he spoke positively of immigration, declaring that Labour needed to make a ‘stronger [and] wider case on immigration’.

Proposals allowing asylum seekers to work and ending the deplorable ‘hostile environment’ regime that led to the Windrush scandal are all positive, but these are familiar lines lifted from Corbyn’s manifesto. With a broad pro-migration consensus across the party today, adopting positive rhetoric on immigration won’t be a hard sell – at least internally.

But rhetoric on immigration is one thing, and free movement is another. As anyone who has read the news in the last four years knows, the Leave/Remain divide has split Labour’s electoral coalition and, to some extent, the party too.

In a sense Brexit should have solved the dilemma for Starmer, leaving him able to declare that as ‘we leave the EU tonight the leave/remain divide goes with it’.

Yet it has also left him seemingly suggesting that he would restore free movement once the current government abolished it. Quite a contradiction perhaps.

And yet, arguably at least, the tide is turning on immigration. The British public have become more open to immigration since the referendum.

The Covid-19 pandemic has also highlighted the significant role migrants play as key workers including the 13% of non-Britons working in the cherished NHS. Indeed, the Prime Minister himself took pains to identify his ICU carers’ countries of origin.

All this presents an opportunity, perhaps, for Starmer’s Labour opposition to challenge the government’s record on immigration and become a champion for a workable and equitable post-Brexit regime

We are yet to see if the government’s touted points-based system, due to be rolled out in 2021, will provide the flexibility the UK labour market needs – but much can be critiqued in anticipation.

For instance, the proposed salary threshold will leave many workers ineligible – some of them the same workers now recognised as key to tackling the pandemic. This might therefore be a relatively easy hit for Starmer.

After the crisis has abated, it seems quite possible that public attitudes to even so-called ‘low skilled’ migrant workers may be more forgiving – as long, that is, that any consensus on the value of key workers lasts.

The current crisis, then, offers a chance for Starmer and Labour to capitalize on the growing public awareness of key skills the UK needs and to be the champion for the rights of migrant key workers.

Perhaps most importantly, it serves as an opportunity to promote an equitable system that moves away from both the protectionist objectives of reduction come-what-may and a neoliberal framing of economic worthiness.

That said, it will require careful handling. Achieving the above would help the party no end. Going further and trying to restore free movement – or even talking about doing so – could well re-open the divides that Starmer is trying to bridge