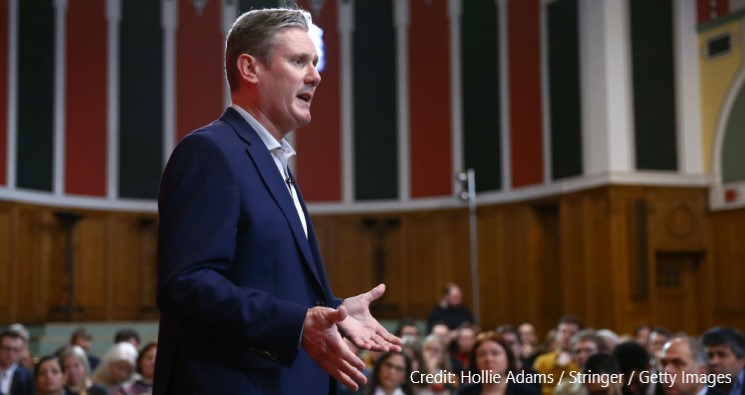 The fortunes of the Labour Party have been rather overshadowed by the fight against the Covid-19 pandemic. However, it remains the official opposition party, and as such its development affects us all. Two recent events in the British left are instructive about the party’s relationship with the EU, and its future more broadly.

The first is obvious: Keir Starmer has succeeded Jeremy Corbyn as party leader, on the basis of an overwhelming mandate from the party membership.

The second is less well-known. In February, authors Kevin Hickson, Jasper Miles and Harry Taylor released a biography of a Labour Party titan, Peter Shore, who died in 2001. A longstanding MP for Bethnal Green and Stepney, Shore served as a former government minister and shadow cabinet member. He was also a committed eurosceptic.

Considered together, these two developments illuminate the political forces both sympathetic and hostile to the EU in the UK – and the modern left.

Corbyn’s leadership was always something of a paradox when considered alongside the history of UK-EU relations. In the 1980s and 1990s, both Shore and Corbyn were standard-bearers of a longstanding eurosceptic tradition on the British left, and often found themselves in the same voting lobby protesting their own party’s acceptance of European integration.

This tradition held that the European project curtailed the sovereignty of the nation state without any real democratic mandate, and looked askance at the EU’s goal of extending the single market. It also channelled strong patriotic instincts – the EU’s curtailment of national sovereignty was as important as its social market or paternalistic features.

From the 1960s to the 1980s, left-wing euroscepticism commanded widespread allegiance across factional boundaries. Hugh Gaitskell, hero of Labour’s right, famously scorned the European Community (EC) as a betrayal of the Commonwealth in 1962, and Shore very much fitted into this revisionist eurosceptic tradition.

Meanwhile, following left-wing tribune Tony Benn (who switched to opposing the EC in the 1970s), many on Labour’s left passionately opposed the EC as a ‘monetarist’ or ‘neoliberal’ institution writ large – including Benn’s protégé Corbyn.

However, the political potency of this tradition has weakened considerably. While Labour’s voters were more diverse, the 2016 Brexit referendum and subsequent polling revealed that a large majority of today’s Labour Party members supported the EU, as did most of its MPs.

As such, it was always a puzzle that Corbyn could command such enduring allegiance from that same Labour membership, as shown in his successive landslide leadership election victories in 2015 and 2016. Polling of party members repeatedly revealed both strong support for Corbyn as leader and huge support for the European project.

During Corbyn’s leadership, this puzzle could be answered in three ways.

First, Corbyn downplayed his past euroscepticism in office, appointing pro-European voices to his shadow cabinet.

Second, some of Corbyn’s supporters developed an explicit hierarchy of priorities: aware of Corbyn’s anti-EU past, they loved his rhetoric and proposed economic, social and foreign policies more.

Third, any relationship between a leader and supporter requires some degree of ‘mythology’, and in constructing the ‘myth of Corbyn’, Corbynites focused on aspects of his past (such as his anti-apartheid activism) and downplayed others, including his euroscepticism.

Yet, now that Corbyn has gone, the members are reverting to type, shown by the coronation of noted europhile Starmer. The coalition of forces that buttressed Corbyn’s leadership has now fractured.

Outriders for Starmer’s chief opponent Rebecca Long-Bailey tried to halt Starmer’s advance by pointing out that some of the seats lost in 2019 fell at least partly because the Conservatives outflanked Labour on Brexit. Indeed, some in Labour’s left-wing bastions, such as the trade union Unite, continue to strongly dislike the EU. Yet, Long-Bailey’s defeat shows their marginalisation.

Counterintuitively, the Shore biography reveals this too. Of course, it demonstrates an ongoing, lively tradition of euroscepticism on the British left. However, politically, the tradition is undeniably marginal to the contemporary Labour Party.

This is best symbolised by one of the speakers at the book’s launch: the Brexit cheerleader and former Labour MP for Vauxhall Kate Hoey. Aside from some vocal champions on Twitter, Hoey is viscerally disliked by most Labour activists, left and right, and the feeling seems to be mutual. At the last election, she even voted for the Democratic Unionist Party.

What does this tell us? For one, the Labour membership’s instinctive pro-Europeanism may shape the future domestic politics of UK-EU relations.

Importantly, following constitutional changes in 2014, the membership has unprecedented power and is the kingmaker in leadership elections (indeed, this facilitated Corbyn’s accession in the first place). This could pressurise the new leader of the opposition into vocal resistance to Boris Johnson’s strategy of securing a comparatively distant relationship with the EU.

Admittedly, Labour’s ability to even make a difference depends to a significant extent on the Conservative Party’s own discipline. Nevertheless, Labour’s members may plausibly shape (positively or negatively) the ongoing negotiations over trade agreements with the EU, and indeed other hegemons like the USA.

In turn, the UK’s historic and present relationship with Europe will continue to influence Labour. At the very least, it must surely provide part of the explanation for striking factional realignments during this leadership election.

Starmer could boast supporters as diverse as Paul Mason, Luke Akehurst, Laura Parker and Ben Bradshaw – respectively a Marxist journalist, a Labour Right fixer, a former national coordinator for Momentum, and a MP who loudly defends New Labour. One of the vanishingly few things all these people have in common is their past votes for Remain in 2016.

Yet, without careful party management, the pro-European instincts of Labour’s members may also constrain Starmer’s leadership as it attempts to claw back forfeited electoral ground. Britain’s relationship with the EU will undoubtedly lose some of its polarising potency as 2016 recedes into the horizon.

Nonetheless, it is unlikely to fade into obscurity either. Not only will UK-EU trade negotiations probably drag on, but they will proceed while outstanding existential questions haunt both the European Union and United Kingdom – both structures are plagued by internal secessionist agitation, regional inequality, and competing ideological visions of their constitutional future.

Given these contexts, the Labour Party’s stance on UK-EU relations will likely remain an influence on its political health for some time.

Starmer’s leadership will be desperate to forge a new national appeal, and recently MPs Jon Cruddas and Bridget Phillipson and historian Jon Lawrence have all penned thoughtful essays that approach that task from different perspectives.

Still, even if Starmer concocts a convincing answer to the problem of Labour’s future, the empowered Labour membership may not let him pursue it without kicking up a fuss. It remains to be seen whether the membership will help or hinder the party in its forbidding challenge to regain power.