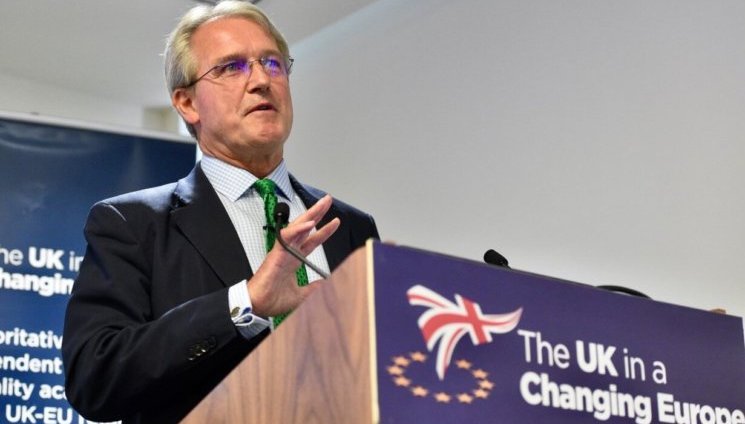 I have been visiting Northern Ireland and the Republic of Ireland very regularly for many years, doing business before I was an MP then every week for three years as Shadow Secretary of State, and two years as Secretary of State. I continue to visit privately.

Over that time, I have enjoyed good relationships with politicians on both sides of the border and of all political colours, not least Simon Coveney, with whom I worked closely when we were both ministers responsible for agriculture during Ireland’s presidency of the EU.

I have seen at first hand the ways in which businesses deal with the very real border which already exists between the two countries – in currency, VAT, excise duties and security.

In all my many conversations with business-people and politicians on both sides of the border, not one has ever said that the current arrangements present any problems to them, as they are all handled seamlessly with modern technology.

Unintrusive cameras and automatic number-plate recognition already exist at the border; intelligence-led spot checks to prevent illegal activity are routine. These differences and their solutions will continue regardless of the UK’s membership of the EU.

A hard post-Brexit border is completely unworkable and a practical impossibility. Doom-laden predictions of a future of chaotic checkpoints and unmanageable delays have continued to dominate the headlines, but no one is arguing in favour of that.

The alarmist claims are unfounded. The UK Government’s ambition to avoid “a hard border… to maintain the Common Travel Area between us, and to make sure that the UK’s withdrawal from the EU does not harm the Republic of Ireland” is perfectly achievable with modern technology and the goodwill which exists on both sides of the border.

Trade across the border is characterised by regular crossings of goods, often on the same routes and in the same trucks. Around a third of Northern Ireland’s milk heads south of the border for processing into butter, cheese and infant formula. Some 13,000 border crossings are made each year purely for the production of Guinness.

As a result, an Authorised Economic Operator (AEO) scheme can allow this daily trade to continue seamlessly. Paperwork can be submitted electronically ahead of travel, with number-plate recognition systems allowing trucks to cross the border without so much as changing gear.

Indeed, GPS technology – available on every single mobile telephone – may obviate the need for any physical infrastructure, including cameras. Small traders can be afforded special exemptions, with light-touch regulation and the requirement to pay any duties only once or twice each year to minimise disruption.

But such schemes require expansion. At present the UK has only around 600 AEOs, compared to over 6,000 in Germany. It is imperative that we do not allow political disagreements to delay the vital practical work which is required if we are to ensure continued, frictionless trade.

The Chief Executive of HMRC, John Thompson, echoed these sentiments in his helpful, level-headed comments to the House of Commons’ Brexit Committee in November last year, and the Head of the Irish Revenue has said that he is “practically 100% certain” that there will be no need for new customs facilities along the border.

Indeed, the European Commission itself, in its Smart Border 2.0 paper written by former Director of the World Customs Organisation Lars Karlsson, conceded that Brexit “could be seen as an opportunity to re-design the border concept and to operationally test a new model on the NI-Ireland border…potentially as a best practice for other EU external borders.”

Sadly, these practical views seem to have been drowned out in recent months by more politically-motivated voices. Michel Barnier’s proposal even suggested that “the territory of Northern Ireland… shall be considered to be part of the customs territory of the Union.”

This, of course, is completely at odds with what 17.4 million people in June 2016 and 85% in last year’s General Election voted for: the United Kingdom leaving the Single Market, the Customs Union, and the jurisdiction of the European Court of Justice.

It is also contrary to the Principle of Consent enshrined in the Belfast Agreement: designed to respect the border, and leave the choice about its future solely, democratically and peacefully in the hands of the people of Northern Ireland.

Barnier’s proposal would serve neither the interests of the Republic of Ireland nor Northern Ireland. The latest figures from the Northern Ireland Statistics and Research Agency show that 85% of Northern Ireland’s sales are within the UK – with 65% remaining in the province, and a further 20% with Great Britain.

Such approaches stand squarely against the politically-motivated hyperbole which has thus far, regrettably, characterised discussion of the border; some have even irresponsibly suggested that Brexit may threaten the Belfast Agreement and peace in Northern Ireland.

There is no risk of that. The Agreement’s courageous architect, Lord Trimble, rightly dismissed such claims as “rubbish”. A sensible technological solution can ensure continued cross-border co-operation and prosperity in the best interests of the whole British Isles.

By Owen Paterson, Member of Parliament for North Shropshire.