Taking the long view of the Trump visit 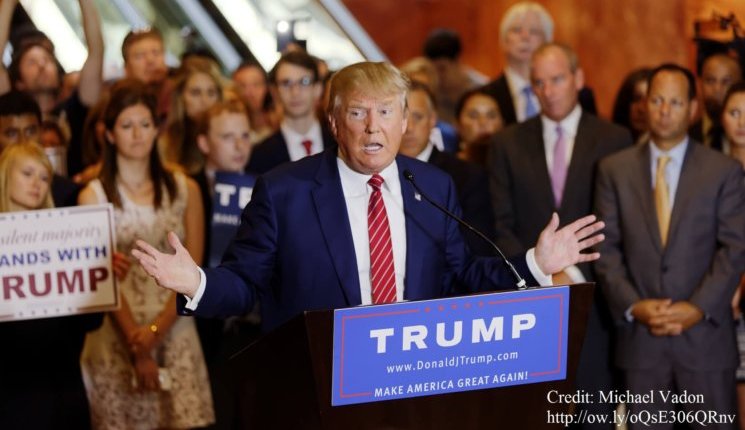 President Trump has concluded the public stage of his UK tour, leaving the country to digest the fallout from an unsurprisingly controversial visit.

Whatever the rights and wrongs of his views on Brexit and Theresa May’s negotiating strategy, there can be no doubt that Mr Trump breached diplomatic protocol and the Debrett’s guide to etiquette in the already-infamous interview with The Sun newspaper.

Ahead of a big week for the government’s Brexit plans in Parliament, the Prime Minister must be left wondering: with friends like this, who needs enemies?

It is right to assess what this visit will mean for Brexit and the health of the Anglo-American alliance. First, it should be a rude awakening for anyone under the illusion that allies beyond Europe will put sentimentality above hard, national interests in future trade talks.

The United States is at the top of the Brexiteers’ Free Trade Agreement wish-list but Trump has evidently poured cold water on that idea. He blamed Theresa May’s new Brexit white paper which would see the UK closely aligned to the EU on goods.

But even if the UK government had proposed a looser arrangement with the EU (thereby opening up the possibility of a US-UK FTA), it is highly unlikely that any American president – let alone one that espouses an ‘America First’ agenda – would allow British banks to dramatically expand their footprint in New York, for example.

This episode serves as a useful, if not slightly foreboding, reminder of the challenge that the UK will face once it leaves the EU. The Conservatives will be under pressure to negotiate trade deals quickly once the UK has left the European Union.

This will put the country’s negotiators at a disadvantage to their foreign counterparts, who will all be fully aware that the UK is desperate for deals. States like China can be expected to drive a hard line in future negotiations and Trump’s attitude shows that we should not expect any favours from our allies either.

Other countries in the ‘Anglosphere’, such as Australia and Canada, have welcomed the prospect of a new FTA but they are unlikely to give Britain a deal on London’s terms for old times’ sake.

In 1848, the then British Foreign Secretary, Lord Palmerston, asserted that, “our interests are eternal and perpetual, and those interests it is our duty to follow”. Ministers would be well advised to heed these timeless words.

The second takeaway from Mr Trump’s visit is that the media and commentariat continue to misjudge the Anglo-American alliance by placing too much emphasis on relations between political leaders.

There is generally never a shortage of commentators seeking to call time on the Anglo-American alliance. Within the last five years, the 2013 Syria debacle was hailed as a watershed moment, as was Donald Trump’s rebuke of Theresa May after she criticised him for retweeting incendiary videos posted by a British far-right group last November.

Despite these grim auguries, the Lazarusian US-UK relationship continues to endure. This is because the chemistry between leaders is only one measure of the US-UK alliance. As the former British Ambassador to Washington, Sir Christopher Meyer, wrote, these personal relations go in “peaks and troughs”.

At its heart, the US-UK alliance, unhelpfully labelled the “Special Relationship”, refers to the unique military and intelligence bonds between Britain and the United States – ties which have and will continue to outlast the tenures of any prime minister or president.

British and American military cooperation can be traced back to the early nineteenth century, but it was the depth of collaboration during the Second World War that served as the catalyst for the contemporary relationship. This was where the close links that form the integral institutional element of the alliance were forged.

Ever since, British and American military forces and security agencies have become integrated to a degree that is unprecedented in the history of bilateral state relations. We have repeatedly seen how this benefits British interests.

In 1982, for example, the US Navy was supplying the British Task Force with weaponry and jet fuel as it steamed toward the Falklands, even before President Reagan had given the nod to Defense Secretary Caspar Weinberger to provide covert assistance.

These sticky institutional bonds are likely to remain in place for the foreseeable future, regardless of what happens with Brexit. The new Queen Elizabeth-class aircraft carriers, for example, have been designed to be interoperable with the US Navy and Marine Corps.

It is telling that the US Navy tweeted its support for NATO last Sunday, just as its Commander-in-Chief was preparing a volley of critical tweets directed at the alliance. More significantly, the US Senate on Tuesday passed a resolution in support of NATO by 97-2.

Good rapport between prime ministers and presidents of course provides further ballast to the US-UK partnership and transatlantic relations more broadly. The point, however, remains that the institutional strength of the alliance is such that it can endure any dip in the personal affinity between a president and a prime minister, such as existed between Wilson and Johnson, or Heath and Nixon.

It is worth considering that even the ‘peaks’ of the Anglo-American relationship have not been trouble-free. In 1983, Margaret Thatcher famously rebuked President Reagan during a phone call after his administration’s unexpected invasion of Grenada, a country which retains Queen Elizabeth II as head of state.

Words do matter, however. The President’s interview with The Sun is further evidence to suggest that the relationship between May and Trump is not going to be regarded as one of the ‘peaks’ of the alliance.

But just as Brexiteers should remember that allies will prioritise their own national interests in trade talks with the UK, those who give the US-UK partnership its last rites must realise that there is more to the alliance than summits and hand-holding.

By William James, a DPhil candidate in International Relations at the University of Oxford and a Research Assistant at The UK in a Changing Europe.