The backstop will be temporary and limited…but how? 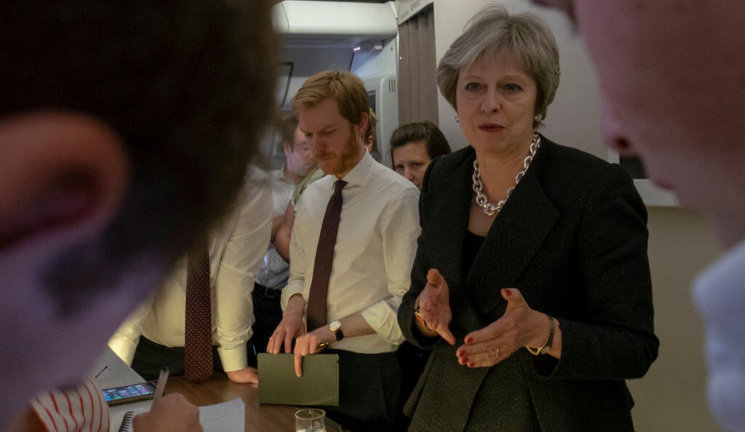 Never before has there been so much public debate, if not public interest, in customs. After a morning of storm and thunder and threats of resignations, the Cabinet released a ‘technical note’ on 7 June on its proposal for the customs arrangement.

This backstop option – as proposed by the UK – effectively means that the UK (not just Northern Ireland) would remain in the EU customs union. The UK government calls it ‘a temporary customs arrangement’ that ‘would only come into force in limited circumstances’. We raise both of our eyebrows – one for ‘temporary’ and one for ‘limited’.

How ‘temporary’? A decade or so.

Emphasising the victory of Brexit secretary David Davis in the customs battle, the document says that the temporary customs arrangement would be time-limited. This means that the backstop option will operate until a permanent arrangement is in place.

First, any special future arrangements won’t be part of withdrawal agreement (i.e. the Article 50 divorce agreement), but will be included in the future trade agreement between the EU and the UK, a point recognised in the technical note. However, the document is silent on what permanent arrangement the UK will seek.

Second, there is still uncertainty as to what form the future deal will take. The EU has adopted guidelines on the future EU-UK relationship which reveal a united position of the European Parliament and the European Council on most core points of the future relationship (on this, see our analysis here).

Third, whatever form the future agreement takes, it will likely be ‘mixed’. A mixed agreement must be ratified by all member states (see our explainer here). The process is long and complex: for example, the EU-Canada Comprehensive Economic and Trade Agreement (CETA) took eight years to negotiate, and almost collapsed when the Belgian region Wallonia, which represents 3.6 million people, refused to ratify it.

The fire was put out, but it showed that EU27 ratification process is long and fragile. The EU does, however, sometimes agree to apply the trade provisions of mixed agreements provisionally, pending national ratification, as is currently the case with CETA.

There are no reasons to believe that the future EU-UK agreement would be any less complex than CETA. Perhaps the opposite, given it will likely cover more than just economic relations. So, the customs backstop could be the order of the day for some time. The time-limit will depend not (only) on the UK, but (also) on EU27.

The backstop option is also supposed to be ‘limited’. The technical note says that the temporary customs arrangement would apply to all trade between the UK and the EU. It would eliminate tariffs, quotas and customs processes and so it might look something like the EU-Turkey Customs Union (see our analysis here).

Turkey has a limited free trade arrangement with the EU which covers trade in industrial goods but does not include agricultural products. In exchange, Turkey negotiates its own free trade agreements but is bound by the EU’s common external tariff. The backstop will have to cover all goods as otherwise it would lose its purpose of avoiding border checks.

Turkey is also under an obligation to harmonize as far as possible its laws with the EU’s legal framework in areas of direct relevance to the operation of the customs union. For the UK the obligation would likely be stronger.

The Protocol on Ireland and Northern Ireland attached to the draft Withdrawal Agreement of 19 March 2018 states that the UK will maintain ‘full regulatory alignment’ with relevant rules of single market and customs union.

The government maintains that the UK will be outside the scope of the EU’s Common Commercial Policy (which would allow UK to negotiate free trade agreements with third countries), ‘except where it is required to enable temporary customs arrangements to function’. Moreover, the UK will apply the EU’s common external tariff to the extent required for the backstop to function.

However, in his statement issued in response to the UK’s proposals, the EU’s Brexit negotiator Michel Barnier was clear – the backstop cannot be extended to the whole UK. It has been designed for the specific situation of Northern Ireland and so only Northern Ireland would form part of the customs union.

If the backstop will in fact apply to Northern Ireland only, there will have to be a border within the UK, sometimes referred to as an East/West border (something which the DUP is profoundly opposed to). This border would be an internal border with external significance. Checks will have to be put in place to determine whether an import qualifies for preferential treatment.

The key term here is ‘rules of origin’ (ROO) which are designed to identify a country where the goods have been manufactured (as opposed to where they have been shipped from) (see our explainer here) to determine whether they are covered by a preferential agreement. All goods entering the EU through the UK would be subject to ROO and the delays and complications that will ensue.

The European Commission flagged this up clearly in its notice to stakeholders warning of the legal repercussions concerning ROO. Materials and parts produced in the UK currently count as ‘EU content’ for the purposes of applying preferential origin for imports. From 30 March 2019 the UK will become a third country (i.e. a non-EU country) to which the EU preferential trade arrangements with third countries such as Korea and Canada will cease to apply.

If a UK-wide backstop option does not cover the period until the future EU-UK partnership is agreed, the UK inputs in supply chains will no longer count as EU inputs and will not qualify for preferential treatment. There have been reports that the Dutch Government issued advice to its businesses to re-consider using UK parts in their products to avoid being disqualified from preferential treatment.

Anxious warnings are coming from UK businesses as well. Even when (and if) a preferential agreement between the EU and UK is concluded, qualifying for it will remain highly problematic. The report by the Automotive Council suggests that in 2017 around 44 percent of the parts sourced by UK car manufacturers came from UK suppliers. The number is not too far from the average level required by ROO in EU trade deals, which is 55 percent.

However, representatives of the automobile industry note the relevant number is in fact around 25% because not all parts coming from UK suppliers originate in the UK and so do not qualify under ROO. Either way it will prove difficult for the car industry to show their goods are in fact ‘British’ and so count for preferential treatment.

The customs solution has so far proved the biggest Brexit conundrum. The backstop is perhaps the best solution for the UK, not just now but in the future, but Brussels has to agree.