The Bank of England’s EU analysis: free movement and immigration

The speech by Mark Carney, the Governor of the Bank of England, on “The European Union, monetary and financial stability, and the Bank of England” – and even more so the accompanying analytical report  – will rightly be much analysed.

Although the Governor and the Bank were careful to bill it as only relating narrowly to the interaction of EU membership with the Bank’s specific monetary and financial responsibilities, in fact it ranges much wider, setting out perhaps the nearest thing we’ve seen to the Governor’s vision of the future of the UK economy.

Here I’d like to focus specifically on the Bank’s view on immigration and free movement of workers within the EU.  I think there are three points worth noting.

First, the Governor’s vision is very much one of Britain as an “open economy” (covering very similar themes to my paper here).

The UK is an open economy par excellence. In fact, the UK has bet on openness for almost two centuries. A bet that has paid off handsomely. From the repeal of the Corn Laws onwards, the UK has acknowledged that impediments to free trade are seldom, if ever, ‘first best’ responses to the many maladies from which market economies can suffer. Where the UK has led, others eventually followed. In time, every major advanced economy has come to embrace openness as a strategy to promote the well-being of its citizens.

This is perhaps not surprising.  More interestingly, in contrast to some of the EU’s critics, he is explicit that EU membership has supported and enhanced that openness, rather than detracted from it. As the full report puts it (page 16):

EU membership increases the economic and financial openness of the UK economy by facilitating the free movement of goods, services, capital and labour across member states, which leads to increased market size and increased competition. Alongside domestic reforms and increased globalisation, EU membership has played a role in: increasing UK trade; attracting inward Foreign Direct Investment; increasing the share of global financial activity undertaken in the UK; and allowing UK firms to access a larger labour market.

Second, and crucially, he identifies free movement of workers within the EU as a central ingredient in this greater openness. In this he is sharp contrast to many politicians, up to and including the Prime Minister (but politicians from all parties are guilty of this) – who seem to accept the economic arguments for free trade, but somehow dismiss or ignore precisely the same arguments when it comes to free movement, as I explain here. But for the Governor, as for the EU, they go together:

Cross-border integration of goods, services, labour and capital markets increases an economy’s dynamism through increased specialisation, enhanced competition, and greater possibilities for diversification and risk-sharing.  Greater openness boosts the size of markets that UK households and firms can access. In turn, trading in larger markets spurs innovation and promotes the adoption of new technologies from abroad. It also intensifies competition and drives efficiency improvements not least by allowing firms to exploit economies of scale. The openness associated with the free movement of labour can help better match workers with firms, alleviating skills shortages and boosting the supply side or the potential growth rate of our economy.

This is illustrated with a nice graphic: 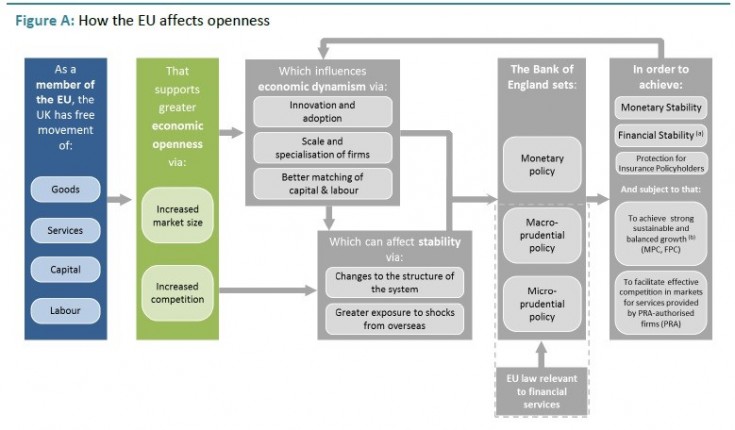 The Bank’s detailed analysis concludes that “EU workers are likely to have complemented domestic workers, perhaps because they fill skill gaps or specialise in different tasks”.

And finally, and perhaps even more importantly, the Bank takes head-on one of the prevailing “zombie arguments” made by the anti-immigration lobby, most notably Migration Watch, that while immigration increases the size of the economy, there is no evidence it boosts GDP per capita. Here the Bank ranges more widely, looking not just at free movement, but immigration more generally.

The report has a good summary of the evidence, pointing to a number of papers that find that migration boosts GDP per capital, productivity, trade, and innovation (page 37):

Finally, openness to labour flows – via migration – can allow an inflow of skills not otherwise available in the domestic economy. Ortega and Peri (2014) find that migration boosts long-run GDP per capita, acting both through increased diversity of skills and a greater degree of patenting. At the firm level, several studies further find that migration has a positive impact on productivity by diversifying the high-skilled labour employed by firms. And Miguélez & Moreno (2013) find that the mobility of researchers in Europe boosts patenting rates. A further range of studies find strong links between migration and trade, which may be explained by the fact that migrants can provide information that makes it easier for firms to start exporting to the their home countries.

As with other aspects of openness, the Bank doesn’t attempt to put numbers on the gains to the UK from immigration. However, as I noted in my supplementary evidence to the House of Commons Home Affairs Inquiry into immigration and skill shortages, the most recent analysis of immigration and growth across the OECD found generally positive impacts, particularly in countries like the UK where immigrants are generally more skilled than natives, as this table reporting the key results shows:

For the UK, the fifth column suggests that a 50% increase in the net migration rate is associated with a 0.3% increase in productivity (which is a relatively good proxy for GDP per capita over the medium run).

This would mean that halving net migration – still not enough to hit the government’s net migration target – would be associated with a productivity decrease of 0.3%; quite large if sustained, and certainly comparable to the sorts of impacts, positive or negative, from other major government policies, for example on skills and infrastructure.

Using the coefficient in the fourth column – a 1 percent change in the overall net migration rate – would give a smaller, but still significant, impact. Of course, these results should be regarded as illustrative – the key message is that the latest research does indeed suggest that, at least for the UK, migration is good for growth, and that this matters.

The Bank’s intervention into the debate on free movement and immigration is very much welcome; while the debate is not, and should not, be just about economics, economics does matter.

The Bank’s conclusion that the free movement, and immigration more generally, has contributed to the success of the UK as an open economy is an important and timely one.

This article by UK in a Changing Europe senior fellow Jonathan Portes originally appeared in NIESR.