The Brexit divide and academic freedom 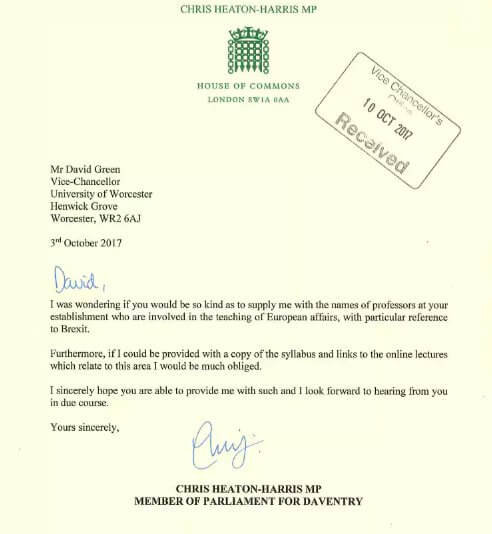 The furore over a Tory MP sending a letter to all university vice chancellors asking for the names of those teaching about Brexit, accompanied by a request to see their teaching materials, has shown how toxic Brexit is as an issue, and how this translates into academic freedom on matters European.

So, why did Chris Heaton-Harris MP write to university heads?  The Guardian quoted me as suggesting his letter had a ‘McCarthyite’ character.  But Jo Johnston, the universities minister, said on the BBC’s ‘Today’ programme that Heaton-Harris had been misunderstood. Indeed, “He was pursuing inquiries of his own which may, in time, lead to a book on these questions. It was more of an academic inquiry rather than an attempt to constrain the freedom that academics rightly have.”

Well, if Heaton-Harris’ interest was for his own scholarly interest, then he would have been better served by checking Google Scholar for the most cited works and developing a critique of their arguments and evidence. And, if it was an inquiry for a book, should it have been written on House of Commons’ paper and posted from Parliament?

Instead, by writing to the V-Cs directly, and asking for a list of names, academics were left to wonder at his motivation.  What answer might not satisfy him and what might be his next step if he obtained such an answer? With lecture slides he found wanting, might he then ‘name and shame’? Where would the matter stop? Jacob Rees Mogg MP sought to defend his colleague by saying it was ‘not unreasonable’ for an MP to ask universities for such information.

Well, I beg to differ: in a liberal democracy, we don’t want politicians interfering in what is taught and by whom in our universities. Totalitarian states know no boundaries between politicians and academic freedom; the UK does. That’s why we castigate North Korea or Middle Eastern authoritarian regimes.

The quality of teaching and research in British universities is more closely monitored than in most Western nations.  The ‘Teaching Excellence Framework’ (TEF) and the ‘Research Excellence Framework’ (REF) offer independent evaluations of performance and how it’s managed that ought to satisfy the most cynical of observers.  And UK universities are amongst the most successful in the world, as shown in international rankings.

They attract students from around the globe – who, we can safely assume, don’t apply because universities are full of “left wing lecturers forcing their opinions on their students”, as Phillip Davies MP charged.  Universities teach students how to think, to challenge assumptions and received wisdom; they’re not there to advocate opinions.

The Daily Mail has joined the attack.  ‘Have you – or do you know anyone – who has experienced anti-Brexit bias at university?’ it asks, sustaining the McCarthyite tone.  The Mail cites cases of academics campaigning against Brexit in the 2015 referendum and since. But, and this is crucial, none of the cases mentioned appeared to involve campaigning activities in the lecture theatre or class room.

Indeed, in forty years of teaching, I’ve never witnessed an academic do any such thing – hand out a leaflet or announce a rally. The Mail is shocked that academics might exercise their rights as citizens and stand at stalls or go on marches. In one case at Durham, a verbal attack by a lecturer at a student ‘Leave’ stall was followed by a written apology. Retraction is not enough, apparently.

The referendum in 2015 had unleashed new pressures. Following complaints by Bernard Jenkin MP, a leading Leave campaigner, the Electoral Commission repeatedly contacted the London School of Economics to check on what might be said by its guest speakers in its public lecture programme. The Secretary-General of the OECD was to discuss the economic effects of Brexit with Lord Stern.

Was he pro- or anti-Brexit? Should the costs of a reception afterwards count towards the ‘Remain’ campaign expenses?  This was a whole new dimension to the role of a university.  In its debates, was it to maintain a 50:50 balance – rather like the BBC – even though few professional economists were supporting Brexit? Jenkin also attacked the partisan bias of the economic research of the LSE on Brexit, though once investigated, the Electoral Commission found nothing untoward.

Universities must be free to comment on the implications of public policy for their own operation. Prior to the Referendum, Oxford issued a statement referring to the implications of Brexit for its business model, attracting students and staff from across the EU. Similarly, as the Mail highlights, Steve Smith, the Vice Chancellor of Exeter, wrote to students before the Referendum vote to highlight the ‘benefits of EU membership’ to the University. Both seem legitimate actions to me.

Less defensible are the other cases cited in the Mail article. The head of Wolverhampton sent a letter to say the University was taking a stand in favour of the EU; and York University said it was proud the city had voted to remain in the EU. Both are corporate advocacy of a political choice and would seem to contradict the terms of a university’s charitable status under UK law. Again, the Mail reports an academic announcing an anti-Brexit rally on her office door. If we saw a BBC journalist placing an anti-Israel poster on his/her office door, would we let that pass?

Academic freedom is precious, but it also comes with responsibility. The core principles ought to be clear to all.  Sadly, some politicians don’t seem to appreciate the legal provisions on academic freedom they themselves have passed. Brexit is dividing our society like never before. It doesn’t help if the tabloid press follow attacks on High Court judges with academics as the new ‘enemies of the people’.

By Kevin Featherstone, Professor of European Politics and Head of the European Institute at the London School of Economics.  Written in a personal capacity.