The Brexit white paper: what it must address – governance arrangements 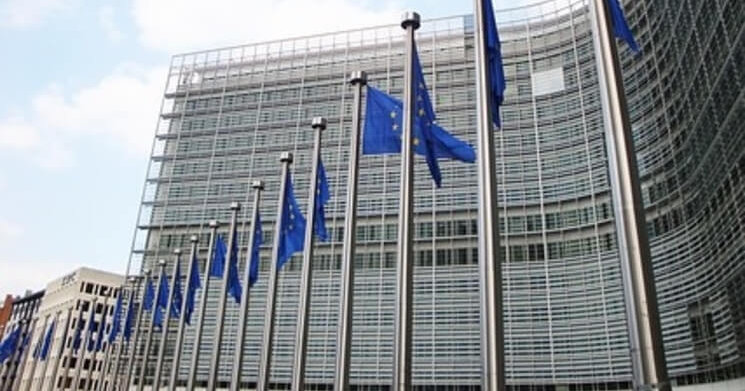 When considering the governance structures that will regulate UK-EU relations post-Brexit, there are, broadly, two alternatives for the white paper to choose between: the intergovernmental and the supranational.

Under the former, the parties meet as equal sovereign states. There may be a secretariat, but it has no authority over the parties. It certainly has no adjudicatory power. Issues are resolved through diplomatic channels.

Failure to resolve those disputes may ultimately result in the agreement withering on the vine or being terminated.

The governance arrangements of the European Free Trade Agreement (EFTA), the agreement between Iceland, Liechtenstein, Norway and Switzerland, broadly follow the intergovernmental model.

There is an EFTA Council which meets at ambassadorial level eight times a year and at ministerial level twice a year. The EFTA Council is advised by the EFTA Parliamentary Committee, a forum for parliamentarians in the four member states, and the EFTA Consultative Committee, a forum for trade unions and employers’ associations in the four member states.

The EFTA secretariat deals with the management and negotiations of free trade agreements with non-EU countries and provides support to the EFTA Council.

In the supranational model, which characterises the EU, states participate in the institutions, which have characteristics of a (quasi-federal) state. So there is an executive (the Commission), a legislature (the Council and the European Parliament) and a judiciary (the Court of Justice—ECJ).

While all member states have representatives on these bodies the decisions of these bodies are binding on the member states, which can be subject to fines if they do not comply. Unlike under traditional international arrangements, individuals and firms have access to the ECJ, often via national courts.

Figure 1: Management of the EEA Agreement, based on diagram on EFTA website 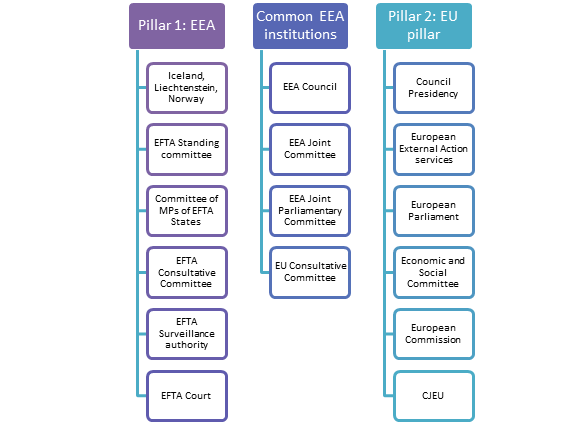 The question facing the UK is which of these two models it wants going forward. Much depends on how close and deep the new partnership is: the closer the relationship, the more the EU will push for something like the existing arrangements.

This is particularly so if the UK stays in the customs union (or something very much like it). Conversely, the more distant the relationship, the more intergovernmental the governance arrangements will be.

The draft withdrawal agreement gives a flavour of what the future governance arrangements might look like. For ongoing management and supervision, it prescribes a Joint Committee between the EU and the UK which makes decisions and recommendations by mutual consent.

It can be helped by specialised committees on, for example, the island of Ireland and financial provisions. This, like the EEA’s Joint Committee, has an intergovernmental feel.

However, arrangements for the settlement of disputes over the interpretation and application of the withdrawal agreement feel more supranational (and follow the EEA model closely). The details are explained in figure 2 below. It remains to be seen if the UK can agree to this. 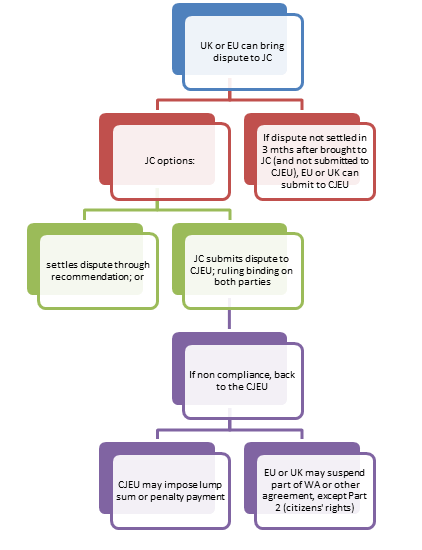 Another alternative could be that the EFTA court (the court of the EEA agreement), perhaps renamed and certainly refigured to include UK judges, is used to decide the issues. If no agreement can be reached, the WTO rules will apply.

Whatever the preferred outcome, there are, in this area as in so many others, difficult choices the government needs to make if the negotiations are to progress.