The Brexodus of MPs will change the House Commons, whatever the election result 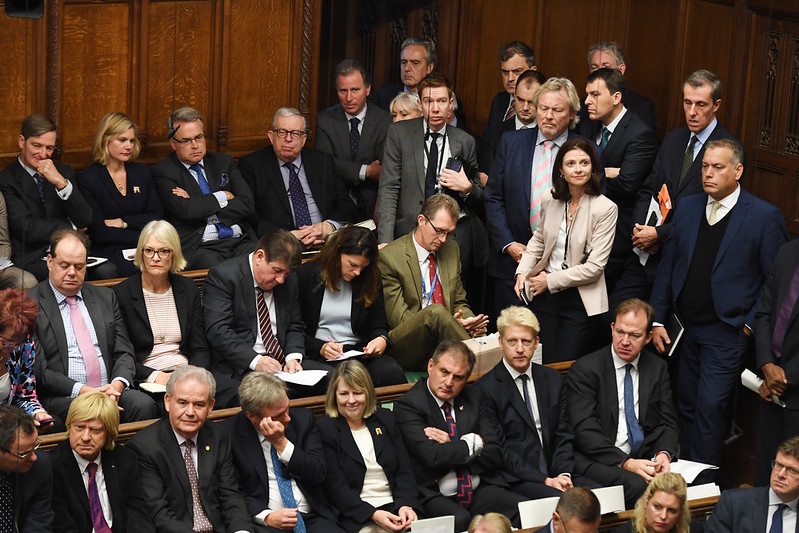 On Tuesday, Philip Hammond said that one of the Prime Minister’s objectives in calling an early general election was to change the face of the Conservative party.

Regardless of the result, he’s likely to be right: even if not a single seat changes hands compared to the results in 2017, this election will change not just the Conservative party but the overall complexion of the House of Commons.

This is for two reasons. First, there has been an unprecedented level of defections, so people who were elected for one party in June 2017 were no longer representing them by the end of the Parliament. Second, a significant number of MPs have in the last few days announced they are standing down.

Both those groups – those that have defected, and those that are retiring – will be replaced by the Conservative and Labour parties with new MPs.

Of the 42 Conservatives and former Conservatives who are confirmed as not running on the Tory ticket this election (as of 2pm on 31 October), 39 voted Remain in 2016. Its fair to assume that most of them – indeed most likely all – will be replaced with enthusiasts for the Johnson deal. So, the centre of gravity of the Conservative Party in parliament will fundamentally shift.

Those ‘Conservatives’ provided the backbone of the Conservative support for a softer form of Brexit in this Parliament. Of those 42, 16 voted to support a customs union in the indicative vote process in the Spring; a further 3, who didn’t vote for the customs union, voted for Nick Boles’ ‘Common Market 2.0’; and a further 6 voted for a second referendum. So, 25 of these MPs expressed a preference directly opposed to Johnson’s Brexit policy.

A further 5 – David Lidington, Amber Rudd, Philip Hammond, David Gauke and Claire Perry – were in the Cabinet and so abstained when MPs were making these choices – but based on their subsenquent pronouncements might have been tempted to support a softening of Brexit..

It’s reasonable to assume the replacements of all 30 will be significantly less keen on both a softer Brexit and a referendum.

At second reading of the Withdrawal Bill, the government had a majority of 30.  6 people elected as Conservatives in 2017 – some like Sam Gyimah who has joined the Lib Dems, others like Dominic Grieve who are now estranged Conservatives – voted against the deal at Second Reading. Post-election, new Conservatives elected in those seats would shift to the ‘Yes’ column.

But the bad news for Johnson is that he’s losing some deal-friendly Labour MPs. 9 Labour MPs who are not standing again under the Labour banner supported the government last week, and a further 2 abstained. If Johnson brings his deal back again, there will be fewer Kate Hoeys, John Manns and Gloria De Pieros to support it.

Just under a third of those 35 Labour MPs elected in 2017, who aren’t standing on a Labour ticket this December, supported or abstained on Boris Johnson’s deal. None are likely to be MPs on 13 December.

If their replacements faithfully follow the Labour whip – and it is important to note they will now have a clear mandate if elected to oppose a Brexit deal if not tied to a referendum – then they will all be in the No column next time round.

The net effect is that, even if the Conservatives do not lose a single seat on 2017, Johnson’s majority for his withdrawal agreement would be reduced from 30 to 22.

There is one other piece of bad news for Johnson.  The former Lib Dem MP for Eastbourne Stephen Lloyd voted with Johnson as an independent – but has now indicated he would back the Lib Dem line if re-elected – which is also what we assume a new Liberal Democrat would do. That would take his majority down to 20. Johnson’s room for manoeuvre would be significantly decreased.

Then, look at that programme motion which Johnson lost by 14 votes. 11 MPs elected as Tories in 2017 voting against him, but 9 Labour and former Labour MPs voted with him, while soon to be retired Ronnie Campbell abstained. In short, the numbers would look broadly the same.

All this adds up to the fact that, if every seat elects the same party as it did in June 2017, two things will have changed in six weeks time: the benches behind Boris Johnson will be more pliant and easier to manage, but he will get significantly less help from the benches opposite.

By Dr Alan Wager, Research Associate at The UK in a Changing Europe