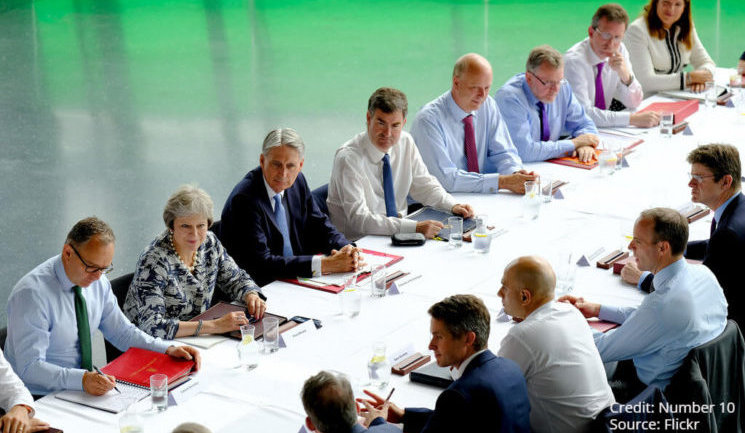 The survival of the Conservative Party is now irrevocably bound up with Brexit. Failure to deliver Brexit could well spell the end of the nation’s oldest political party. Yet the process of delivering Brexit threatens to pull the party apart.

At the root of this difficulty is a fundamental conflict at the heart of Conservative statecraft. On the one hand, what Andrew Gamble called the ‘politics of support’ make it imperative that Brexit is delivered: the large majority of Conservative Party members and voters back leaving the EU.

On the other, the ‘politics of power’ demands that as a party of government the Conservatives reconcile the wishes of their supporters to the prevailing political economy. But this is particularly difficult for two reasons.

Firstly, for hard-line Brexiteers, ideological commitment to ‘taking back control’ takes precedence over the interests of capital.

Secondly, the debate over the form of Brexit the UK should seek increasingly reflects a dispute on the right of British politics about what form of political economy the country should pursue.

The events leading up to the vote for Brexit, have – rightly – been widely discussed and analysed in terms of a Tory psychodrama. The decision to hold a referendum was a calculated gamble by David Cameron, who felt increasingly shackled by his Eurosceptic backbenchers and the growing UKIP insurgency.

It marked the culmination of four decades of Conservative infighting over Europe. And while the timing of the Referendum was, with the benefit of hindsight, a catastrophic blunder which destroyed his premiership, it’s not hard to see the logic of his thinking that the issue was one a Conservative leader would have to confront sooner rather than later.

Emboldened by the 2014 vote against independence in Scotland, a plebiscite was his instrument of choice.

Cameron was warned by some of his closest political confidants not to concede a referendum on membership of the EU. Perhaps the most compelling argument against doing so was that even if it was won, it would not deal with the issue decisively.

The matter would not be ‘put to bed for a generation’ as he hoped. Especially in the event of a close result, it risked further emboldening the Eurosceptics and more deeply embedding the divide within his party, by forcing people to choose one side or the other.

The already diminishing space for compromise between the different factions would evaporate completely. UKIP would quite possibly have grown stronger than ever.

For a brief interlude following the vote for Brexit it appeared that in losing the referendum and his position in Number 10, Cameron might have inadvertently helped resolve the seemingly intractable fissure in his party over European integration.

His resignation statement stressed that the ‘will’ of the people ‘must be respected’, a line quickly echoed by Theresa May in her oft-repeated mantra that ‘Brexit means Brexit’.

The vast bulk of Conservative MPs were quick to agree that the Referendum result had to be accepted and Brexit implemented, reflecting the extent to which pro-European sentiment and diminished in Conservative ranks.

Somewhat remarkably, when former Cabinet Minister Justine Greening MP recently came out in favour of a second referendum, she was the first senior Tory to do so.

Conservative determination to see Brexit through has remained solid, even as the potential economic costs have come more sharply into focus. In no small part this reflects a realisation amongst most Conservative MPs that not doing so could provoke insurrection in the party’s rank and file and electoral disaster.

Some 70 percent of Conservative voters at the 2017 general election were ‘enthusiastic’ about Brexit, with a further 22 percent ‘accepting of Brexit’. Abandoning and delaying Brexit, or being seen to deliver ‘Brexit in name only’, would likely set the stage for a UKIP revival.

Nevertheless, as a party of government, the Conservatives find themselves being pushed and pulled towards a softer Brexit, as the illusory ‘cake and eat it’ exit from the EU promised by Boris Johnson evaporates, to be replaced by government pronouncements on stockpiling food and medicine.

The ongoing difficulties finding a solution to the Irish border question, the threat of disruption to trade, and the hard realities of the potential economic costs of distancing ourselves from the world’s ‘largest and most integrated market’ makes a soft Brexit, retaining membership of the single market and customs union (at least for a very extended transition period), the pragmatic way out of a the corner the UK is boxed into, aligning the government with prevailing economic and business interests.

The self-proclaimed ‘party of business’ instead found itself with a Foreign Secretary condemned in the Financial Times for his expletive-laden attack on private sector wealth creators objecting to a hard Brexit, and with one of its most prominent backbenchers dismissing the concerns of the CBI, as ‘they’ve got everything wrong in the whole of their history’.

Jacob Rees-Mogg’s casual scorn of the UK’s largest business membership organisation is ideologically driven: the zero-sum conception of parliamentary and national sovereignty he shares with many Conservative Brexiteers cannot accommodate the pooling of power that comes with EU membership, let alone effectively becoming a ‘rule-taker’ formally outside of the union but participating in its regulatory frameworks.

However, for many Conservative Brexiteers, ‘taking back control’ is not just an end in itself, but affords the opportunity for a new wave of Thatcherite neoliberalism – a ‘leaner, meaner Britain’ of lower taxes, few regulations and a smaller state.

This strand of hyperglobalist thinking can be traced to the 1990s, and finds its modern incarnation in the rhetoric of ‘Global Britain’ and amongst proponents of an ‘Anglosphere’ alternative to the EU. It is not though clear that there is any great public appetite for this vision.

The concerns of typical Leave voters, over immigration, living standards, or fracturing post-industrial communities – or indeed the post memorable pledge of the official Leave campaign, namely more funding for the NHS – could hardly be further from this view.

It is also not a perspective shared by many Conservatives. When Theresa May entered Downing Street promising to fight burning injustices in British society and address the concerns of the ‘just about managing’, she signalled a desire to re-orientate her party towards a more provincial, traditional blue-collar conservatism in its Chamberlainite tradition.

Such an outlook would sit uneasily alongside a dose of radical economic liberalism.

The Conservatives consequently face a multifaceted crisis. The reaction to the Chequers deal does not bode well for the prospects of identifying a compromise form of Brexit which protects the country’s economic interests and which the bulk of Conservative MPs and supporters can live with, but find one they must.

It is difficult to foresee a Brexit deal that will satisfy enough of the Brexiteers, and at the same time won’t destroy what remains of the party’s reputation for governing competence.

In their pursuit of a radical economically liberal vision of the UK outside of the EU, the Conservative right may yet open the electoral door to the Corbynite alternative.

By Dr Richard Hayton, Associate Professor of Politics at the University of Leeds. Richard is the founding editor of New Perspectives on the Right.