The Conservative Party are not being honest about their Brexit plans 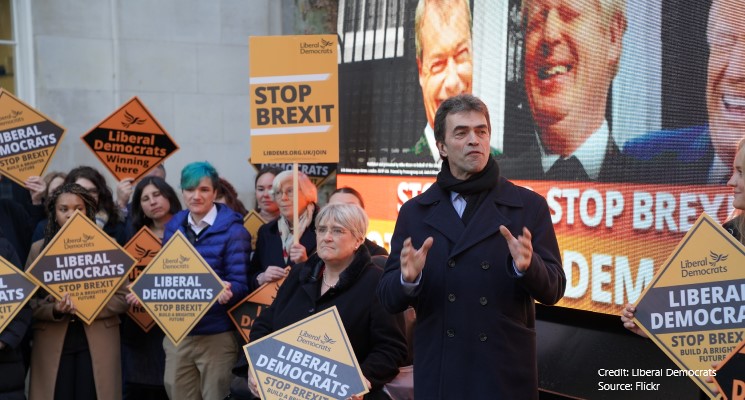 This is the most important election I have ever fought. It bears repeating. I first contested Carshalton and Wallington in 1992, and whilst it has always been a personal knife edge, this time the stakes could hardly be higher. Strange, then, that the Conservative call to arms is so light on detail.

The ruthlessly focus-tested mantra of ‘get Brexit done’ began to sink in over the summer, but there was always a suspicion that, despite all the bluster, the pressure cooker of an election might produce something with a little more substance.

Not so, it seems.

The IFS described the Conservative manifesto as amounting to an ‘underwhelming budget’, let alone a blueprint to run a country for five years.

Fortunately, there was a cunning plan: make additional promises on a whim and leave the untangling of how exactly these fit into promises not to raise council or income tax to someone else, sometime else.

It’s a blueprint for how to win an election, not how to use it.

It’s certainly not a credible plan to run a country potentially embarking upon the most substantial constitutional, economic and social upheaval since the war, full of entirely self-engineered pitfalls, artificial deadlines, and the trap-door of a 2020 no-deal Brexit.

If the devil is in the detail, then it’s alarmingly simple to avoid any detail at all. Poof. Gone. Cake had and jolly well eaten too.

It seems Mr Johnson’s progress through the UK’s august educative institutions, his tenure at two key national newspapers, his being sacked for lying (twice), was all just an elaborate internship for the main role. The real biggie.

Unfortunately for the country, Mr Johnson’s approach has pervaded the Conservative party. At all levels, voters have been faced with a disdain for detail.

The other day, I attended a hustings at Carshalton College. All normal enough, though sadly the Labour candidate was unwell and unable to attend.

The disdain for scrutiny displayed by Conservative Party headquarters also seems to be catching, though. No sign of my Conservative counterpart.

And he was not the first candidate to duck out of the public spotlight this election cycle.

Across the country, an alarming number of candidates seem to think hustings are beneath them, or may expose them. Most notably, of course, Boris Johnson.

Both David Cameron and Theresa May attended hustings, despite enjoying seats safe enough to retire in (oh if only they knew).

How then, can we be expected to know what getting Brexit done means?

When parliament was last sitting, I questioned the government on data adequacy agreements.

Before Mr Johnson secured his deal, ‘alternative arrangements’ were in vogue as a solution for the Irish border question. These included trusted trader schemes.

A great deal was written on this point by the Alternative Arrangements Committee, but the crucial point was missed – no goods would be moving anywhere under such a scheme without a data adequacy secured under GDPR.

No such agreement was forthcoming. In the past, securing data adequacy has taken between 18 months and five years.

If the Conservatives want businesses to embrace technological solutions as they bring us out of both the single market and the customs union, then this lack of concern for such a crucial underpinning pours cold water over the hope for success.

This hints at a further pitfall facing the UK as we go to the polls. ‘Getting Brexit done’ apparently means wrapping everything up neatly within the next twelve months – no extensions, no ifs, no buts.

But this is fundamentally undeliverable.

Whilst we may currently benefit from regulatory alignment with the EU – the frictionless borders that support everything from Just-in-Time manufacturing to tours from the UK’s booming creative arts sector – the Conservatives’ appetite for divergence is clear.

Even Labour’s plans, as far as they can be scryed, hint at sufficient divergence to make securing withdrawal in 2020 all but impossible without massive disruption, even if the passage of a withdrawal agreement through parliament is smooth. In the next stage of negotiations, the process will be pored over by all 27 member states.

This is a particular problem because, if we fail to secure an extension to the transition period before 1 July 2020, then there’s no extension to be had at all.

Sajid Javid has said the chance of leaving without a deal is ‘extremely remote’, but even he must admit that this leaves a great deal to be done, in a far shorter timeframe than ordinarily required for such complex negotiations.

The big issue, then, is that Mr Johnson is being fundamentally dishonest on a point that will have far greater impacts than could possibly be captured in a barebones manifesto.

Just up the road from me, in Sutton, is the Institute for Cancer Research. I visited it the other week, and it’s alarming how little detail they have been given regarding their future operations.

Much of their research, especially regarding clinical trials for rare cancers, is heavily dependent on shared schemes with the EU – without easy cross-border cooperation, access and common standards, there would simply not be enough data to draw conclusions and drive research into rare diseases.

More than this, uncertainty regarding funding and regulation could leave them unable to make the sort of long-term decisions that are so important in applied academic and scientific research, whilst applications from the continent are already well down.

There does not appear to be any clear direction from the government on this point – and the profligacy of the ‘Get Ready for Brexit’ campaign was illustrative. Advice was unactionable, or vague to the point of being unusable.

If the government can’t find it in them to address the concerns of a cancer research institution, then what hope for the innumerable small business affected by Brexit?

Far from freeing Britain from red tape, regulatory divergence threatens to throw the country into a legislative and operational nightmare.

It would behove the Conservative Party to recognise this, and ought to be the duty of government to communicate the impact of its policy.

As it is, there is no plan. The Conservative manifesto is a blank cheque. It will bounce. And whilst domestic policy remains as important as ever, it’s clear that this is very much not a normal election.

The credibility problem is only compounded by the still-unassessed impact of Brexit. The public is owed far, far more than the bluster on display.

By Tom Brake, Liberal Democrat candidate for Carshalton and Wallington.

This piece is part of a series of blogs by political party candidates in the upcoming general election.