The Covid-19 crisis across the Irish border 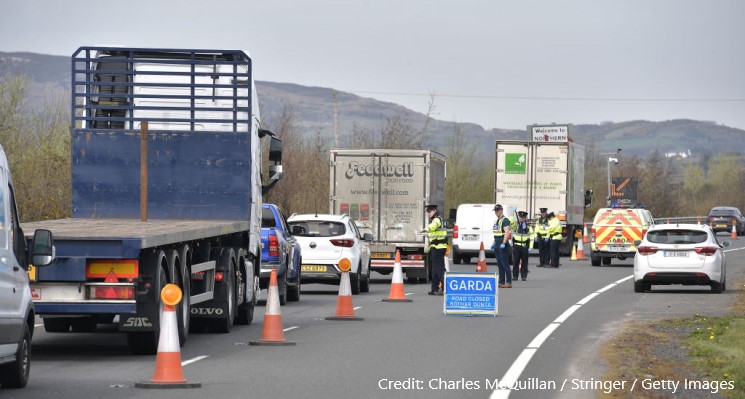 The land border between Ireland and Northern Ireland became one of the most fraught aspects of the UK’s withdrawal from the EU. And yet, where Brexit was once an all-consuming news story, within weeks of the UK leaving the EU on 31 January 2020, Europe was plunged into the Covid-19 crisis.

As the UK and Ireland went into varying states of lockdown to combat the pandemic, the Common Travel Area (CTA) and cross-border co-operation on the island of Ireland have come under renewed strain.

Concerns over the land border becoming more difficult to traverse peaked during the Brexit negotiations, and the political sensitivity which now surrounds the border has shaped responses to Covid-19. On one level, the crisis has confirmed the importance of the CTA, with both countries maintaining travel connections between them.

Ireland, for example, chose not to align with EU measures restricting non-essential travel from third countries in order to enable it to maintain an open land border. There has been no effort to formally ‘close’ the border to non-essential travel, as has happened across Europe’s Schengen movement area.

When asked last week to justify this approach to cross-border travel from Northern Ireland, the Taoiseach raised the issue of travellers on internal UK flights between London and Belfast then making their way into the Republic of Ireland; ‘The only way we could have stopped people on that flight travelling to just this jurisdiction would be to seal the land border between Northern Ireland and Ireland. We are certainly not going to do that.’

This approach marks out Ireland’s Covid-19 response from the 2001 foot-and-mouth disease crisis.

During the 2001 crisis Ireland banned the import of animal and dairy products from the UK to protect its livestock industry (acting ahead of EU constraints).

Checks were imposed on cross-border travellers, with the Irish authorities monitoring ‘all cross Border traffic’, closing some routes and disinfecting vehicles making crossings on others.

Memory of this response contributed to a furore when it emerged that the Irish authorities had no power to enforce movement restrictions introduced in response to Covid-19 on people resident in Northern Ireland, potentially reducing their effectiveness.

Local politicians in popular tourist destinations feared being overwhelmed with travellers from Northern Ireland as a result of this ‘error’. It is less of an error, however, than a deliberate choice over how to manage the border against the backdrop of Brexit.

That Ireland’s worst rates of infection, per head of population, are in the rural border county of Cavan, only increases the pressure around this choice.

This gap in the regulation of non-essential travel is therefore, ironically, a sign of how fragile the CTA has become.

There have been meaningful efforts towards cross-border co-operation in response to Covid-19, notably in the Memorandum of Understanding concluded between Ireland and Northern Ireland’s health ministers and efforts at joint procurement of PPE.

These have, however, been overshadowed by high-profile criticisms of approaches adopted on either side of the border. At the outset of the crisis, Northern Ireland’s approach to lockdown and testing followed the model set by the UK government, not the Irish government.

This led to accusations by some that a Unionist agenda being advanced by the DUP and the UUP was putting lives at risk.

Northern Ireland, however, is not independent in its decision making.

Everything that the power-sharing Executive does in terms of a response to Covid-19 is funded through a block grant from Westminster, meaning that a testing regime or lockdown regime which is more extensive than that promoted by Westminster produces invidious choices about how to cut other public spending.

These constraints provide an avenue for political point scoring which is hardly conducive to co-operation, and not only at the expense of Unionist parties.

In Dáil debate over the Covid-19 response, Leo Varadkar took Mary Lou McDonald to task over the record of Northern Ireland’s Executive, which includes her party Sinn Féin, declaring that when it came to unemployment support during the crisis she should ‘make sure the Northern Ireland Executive matches what we are doing.’

This clash again comes back to the challenges of an integrated economy across the border in Ireland.

Such arrangements for which state pays benefits, however, are governed by EU rules on frontier workers (once again highlighting the European aspect to the crisis). Blaming Belfast’s politicians is something of a cheap shot.

For all that the CTA has so far been maintained through the crisis, this is not the same as saying that Ireland and the UK have acted in a coordinated manner when it comes to its requirements.

Perhaps this is unsurprising given the emerging divides in lifting the lockdown between the constituent parts of the UK, with Boris Johnson’s pronouncements demonstrating little coordination with the devolved governments.

Such divergences nonetheless flag up the contingent nature of any concept of reciprocity in the way the UK and Ireland operate the CTA.

The CTA has never envisaged complete alignment between the jurisdictions that it covers, and even if it did, the current informal arrangements impose no legally enforceable obligations. Quarantine notwithstanding, the UK government have given little indication of a special policy with regard to the CTA.

When he was questioned last week about how contact tracing apps would work in the CTA context, with levels of movement across the land border set to increase as lockdown eases, the UK Health Secretary Matt Hancock responded that he was ‘confident that any such concerns about international travel can easily be addressed, not least by the potential of someone having two different apps on their phone if they need to travel internationally’.

The EU Member States, for their part, have agreed a protocol on the ‘cross-border interoperability of voluntary contact tracing apps’.

In other words, for all of the Brexit debate, the UK government still seems set on treating the UK’s only land border as it does other international travel through designated ports of entry.

Or perhaps it is because of the Brexit debate, for with all the acrimony that has passed between them, the UK and Irish governments show little outward sign of coordinating between each other in the management of the CTA.

In the midst of the Covid-19 crisis, the London-Belfast-Dublin axis appears increasingly dysfunctional.