The Covid-19 pandemic on the island of Ireland 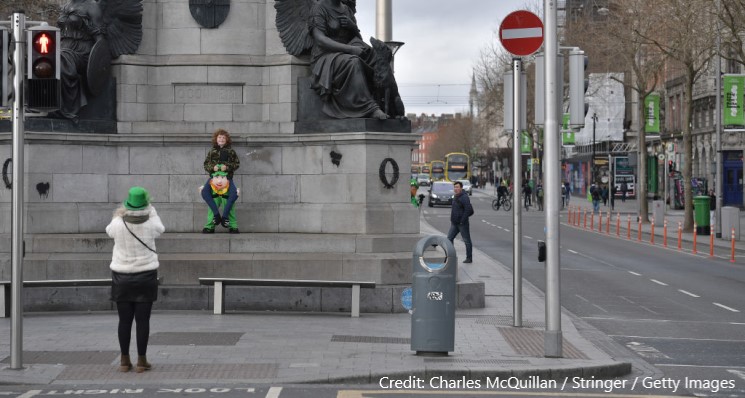 The approach taken by the authorities on either side of the Irish border to the coronavirus pandemic now seems to have converged after differing markedly in the early stages of the crisis when the debate in Northern Ireland saw unionists seeking close alignment with the rest of the UK, and nationalists seeking convergence with the Republic.

The Irish government responded relatively quickly. While on the annual St Patrick’s day pilgrimage to Washington DC on 12 March, Taoiseach Leo Varadkar (a qualified medical doctor) announced that all the country’s schools, colleges and childcare facilities were to close – measures soon extended, with tight restrictions placed on movement, economic activity, and social gatherings.

On 13 March the government introduced a scheme to support those suffering a loss of income due to the pandemic. On 15 March it called for all pubs and clubs to close.

Emergency legislation introduced a freeze on rents and evictions, and for the fast track rehiring of retired healthcare workers and soldiers. The government also effectively brought the country’s sizeable private healthcare system (some 45% of Irish citizens have private insurance) into public control and made all coronavirus-related treatment free.

On 27 March, Varadkar announced tighter restrictions for at least an additional fortnight, instructing people to stay at home in virtually all circumstances, giving Gardaí (the Irish police) powers to detain and fine people.

The Taoiseach and his cabinet – a caretaker government in the wake of the country’s inconclusive general election on 8 February – have been widely commended for their decisive and effective handling of the ongoing crisis, with the first major poll published since the crisis showing popular support for Fine Gael up thirteen points from its election showing  to 34%, Sinn Féin up three to 28%, and Fianna Fáil down four to 18%.

Across the border in Northern Ireland, the response was noticeably different – and noticeably slower. In the wake of the school closures in the Republic, for instance, DUP First Minister Arlene Foster, supported by her fellow unionists in the UUP, insisted that schools, universities and childcare facilities would remain open in spite of demands by Sinn Féin, the SDLP, and the Catholic Archbishop of Armagh that they shut in line with those in the Republic.

Following a meeting with Varadkar on 14 March, Foster insisted that Northern Ireland was different and that she would follow the advice of Northern Ireland’s Chief Medical officer. Even at that stage, however, and given how closely integrated life is on the island of Ireland (the first recorded case in Northern Ireland actually involved someone returning home via Dublin Airport), there was arguably a clear pragmatic case for closer alignment.

That began to happen on 18 March when Foster announced that schools and universities would eventually close from the following week –  in line with the rest of the UK, yes, but ten days after the Republic.

It then took a further ten days for sweeping new powers to combat the spread of Covid-19 to be introduced (on 28 March) compelling the closure of most businesses and restricting movement, finally bringing Northern Ireland into line with most of the rest of Europe, including Ireland.

So why the difference in timing? Arguably, all this must be viewed against the backdrop of political unionism losing its majority (and some of its mojo) in Northern Ireland (following the 2019 UK general election, and the much debated (and by unionists much maligned) ‘border in the Irish sea’ provision in the UK’s withdrawal agreement.

At the same time, Sinn Féin made historic gains in the general election in the Republic in February, and the debate around Irish unity has now very much entered the political mainstream there.

While no political party would openly use the health emergency to score political points, it is apparent that Foster and the DUP sought to assert the separateness of Northern Ireland from the Republic, while Sinn Féin made the case for convergence.

Indeed, the episode shows how the sectarian divide can still shape political realities in Northern Ireland and may well prompt further acrimony and disagreement in a political system familiar with paralysis and rancour.

More optimistically, however, it may have the opposite effect. Politics in Northern Ireland is changing, with up to 50% of people identifying as neither unionist nor nationalist.

Already the island’s two health systems are closely linked, with patients routinely moving between them. In the longer term, a sizeable portion of the electorate can be expected to reject policy decisions that appear motivated by sectarianism rather than the public interest, particularly when it comes to something as fundamental as public health.

Ultimately, despite the slow and stuttering start, a joined-up approach by Dublin and Belfast in tackling Covid-19 should save lives. A virus that knows no borders might underscore how intimately and meaningfully integrated the peoples of Ireland are.