The demise of UKIP? 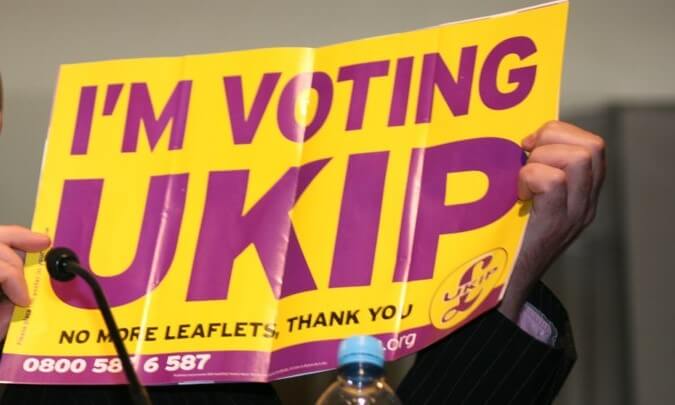 The UK Independence Party, which campaigned for Britain’s departure from the European Union, has collapsed in the country’s general election. The party that two years ago secured more than four million votes and 12% of the vote – has been reduced to a small fraction of this. It lost its only seat, in Clacton, to the Conservatives, with under 2% of the vote share overall. Even its leader, Paul Nuttall, managed only 7.7% of the vote in Boston & Skegness, prompting his almost immediate departure.

This was not an unexpected development. Since the last general election, UKIP has had to deal with the loss of Nigel Farage, its charismatic and highly visible leader, and the loss of its defining policy goal – leaving the European Union. As was clear at the time of last year’s referendum, the party was going to have to undergo a major reinvention to demonstrate its continuing relevance to the broad coalition of supporters that it had built up.

While this was not an impossible task, it was made all the more difficult by the poor handling of finding a successor to Farage, and then by the calling of a snap general election. Nuttall, who wanted to build on the success of the party in Labour heartlands, simply lacked any time to get his message bedded down with the electorate.

As a result, UKIP has lost not only its groundswell of support, but also its representation in the commons, soon to be joined by their longstanding base of operations in the European Parliament, which has given its both credibility and financing.

But the history of the party should give pause for thought, before we write it off. On several occasions before now, UKIP has suffered very strong reversals of fortune and deep internal splits. While bitterly fought, none of these situations brought about UKIP’s collapse. Therefore the key question is whether this time will be any different.

On the one hand, the removal of the EU issue is a real blow to activists. UKIP has never had an ideological core: instead it has attracted the disillusioned and the disaffected from across the political spectrum, especially in those parts of society that feel left behind by other political parties. Taking away one of the few things that was broadly agreed – that the EU is a bad thing – gives even less common ground to share.

Farage’s departure highlights the lack of credible and visible faces in the party: it was a mark of his time as leader that any such challenges to his dominance were kept firmly to one side. Even if he were willing to return once more to his role, there has been something of a changing of the guard at the top of the party, which might mean they would not want him back, even with their sudden vacancy in the top job. Nuttall was not able to build the same charismatic bond so far with voters or the media, which has tended to focus attention back on the policies of the party.

And there is a financial dimension to all this. The impending loss of EU funding (via its representation in the European Parliament) means that UKIP will be relying more than ever on member contributions and big donors. With membership falling sharply since last year, and several donors looking to move on, there has to be a question mark over whether already-curtailed operations can continue.

But it is important to remember that UKIP’s success was built not on the personality of Farage, but on the widespread sense of dissatisfaction with other parties. There clearly remains much potential within the electorate for a more populist agenda; something that is likely to increase as the practical difficulties and implications of Brexit become more evident in the months and years to come. If UKIP can ride out this current storm and reestablish itself as a viable avenue for protest, then it stands a chance of making this just one more bump in the road of its development.

This suggests that we need to look at three key elements in the coming weeks.

First, is there a leadership in place that can provide a stable focus for the party as an organisation? Having suffered a number of defections in the past year, are there other senior figures packing their bags, or are there splits over who should lead? Nuttall’s departure provides an obvious scapegoat for the big downturn in support, but as we saw last year, there is a shortage of viable candidates to step into the breach.

Second, can the party communicate a clear set of policies to voters, to demonstrate its relevance? Nuttall’s project to tap into old Labour areas looked promising – although pickings in the general election look thin – but if that is to continue under the next leader then it requires buy-in from the rest of the leadership and a recognition that such a refocus might alienate some of the current, more right-wing parts of the support base.

And third, will there be enough money to keep UKIP afloat? This is less urgent, but the party will need to show relatively quickly that it can still attract some high-profile donors to its cause, if only as a backstop to the coming tightening of finances. This also matters to show the Westminster bubble that UKIP still counts for something.

This is not game over for UKIP, but it will be as stern a test as it has ever faced.

By Dr Simon Usherwood, reader in politics at Surrey university. A version of this piece originally featured in the Conversation.