The DUP and the politics of Brexit in Northern Ireland 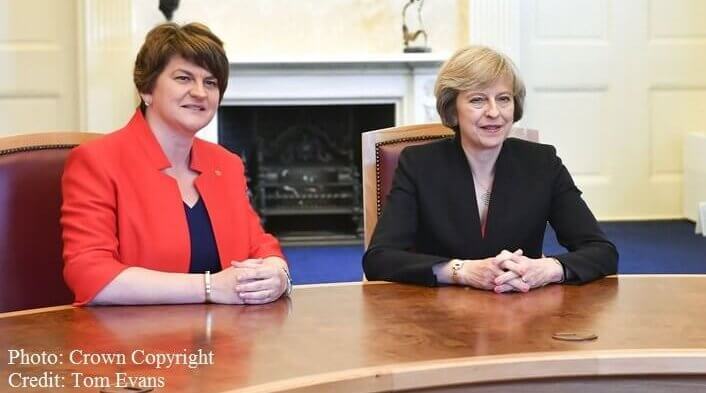 There is a certain irony that the firmly Remain-voting Northern Ireland is now (with the exception of Lady Sylvia Hermon) represented in the House of Commons entirely by Leave-backing MPs from the Democratic Unionist Party (DUP).

These MPs matter all the more because their numbers are currently pivotal. The collapse of power-sharing in Stormont, with no imminent sign of its return, further adds to the imbalance in Northern Ireland’s democratic voice.

Many of the government’s complex arithmetic problems in the House of Commons are solved by the DUP’s ten MPs.

For a start, their numbers keep Theresa May in office. But the government’s room for manoeuvre in negotiations with the EU is significantly reduced by the influence of the DUP’s ten MPs.

Based on the government’s current red lines, the most plausible compromise position – the idea of Northern Ireland having the status of a  ‘special economic zone’, and regulatory convergence in limited areas on the island of Ireland – is seemingly made politically unavailable by the DUP’s insistence on no barriers between Great Britain and Northern Ireland.

The EU27’s position is the opposite: the joint agreement of December 2018 showed the EU happy to be flexible and accept new rules and conditions to work around a position “specific to the unique circumstances on the island of Ireland”, but unwilling to consider ‘cherry picking’ that would apply to Britain as a whole.

The resilience of the DUP’s position is therefore a key question in assessing the government’s path through the political challenges of the next nine months to March 2019. The party acted as effective kingmaker following the general election.

But there hides a structural weakness in their position. The strength of these MPs lies in the fact that, for the first time in 25 years, since the Ulster Unionist Party (UUP) provided key votes in ensuring the passing of the Maastricht Treaty, the government’s European strategy rests on Northern Irish votes.

The DUP’s one symbolic moment of strength was in December 2017, when the party railed against drafts of the joint report UK-EU that hinted at Northern Ireland’s regulatory divergence from the rest of the UK.

Yet DUP MPs may ultimately be faced with a Hobson’s choice: acquiescence to a deal with some divergence for Northern Ireland, or derail May’s negotiations and significantly increase the chance of Jeremy Corbyn – seen as sympathetic to the republican cause, and a fundamental threat to unionism – becoming Prime Minister.

When looking at the decision-making of political parties at these critical decision-points, one of the golden rules is to follow the votes. Parties are guided both by principle and the ballot box. But the DUP’s electoral position is likely to be inoculated in this respect from any Brexit effect.

This is because the polarisation of Northern Irish politics into the nationalist and unionist silos of Sinn Féin and the DUP has only quickened in pace since the referendum. As Raquel Ortega-Argilés and Philip McCann demonstrate in this report, Northern Ireland is one of the areas of the UK likely to be most affected by Brexit economically.

Colin Harvey also sets out the effect on the province’s constitutional settlement, and the likely profound effect on the day-to-day lives of those in border communities. Yet, despite this anticipated upheaval, it is also the place where party politics is most resistant to shifts in voting behaviour linked to the referendum.

This is because the prevailing story in Northern Irish politics from the creation of the Assembly in 1998 is a squeezing of the moderate centre. Figure 1 below shows the steady erosion of the moderate Ulster Unionist Party (UUP) and Social Democratic and Labour Party (SDLP).

This process has been aided rather than stemmed by Brexit. Brexit has led to a decline of moderate unionism and the UUP. In the 2017 general election, UUP representation in the House of Commons was wiped out.

Similarly, the election removed the SDLP from the House of Commons for the first time since the Good Friday Agreement. This means the only republican representation at UK level is now Sinn Féin, effectively removing any republican voice at Westminster because of the party’s abstention.

Yet this long-term shift towards the DUP and Sinn Féin has happened despite levels of ethno-national selfidentification – self-identifying as protestant or catholic – significantly decreasing. It is, in effect, a result of political dynamics rather than societal change. 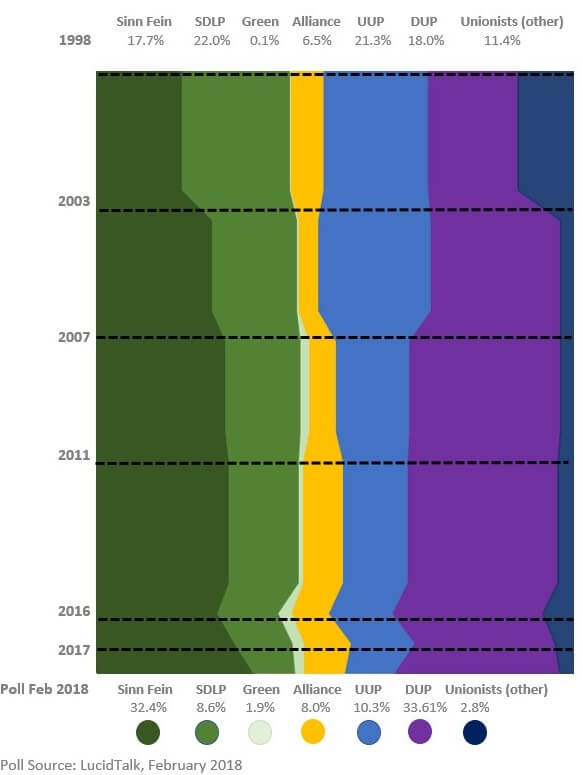 This process of polarisation, while not powered by Brexit, is strengthened by it. Brexit was undoubtedly a unionist project in the region. While it is often pointed out Northern Ireland voted by 56-44% to Remain in the EU, it is less well noted that 66% of those who identify as unionists in Northern Ireland voted to Leave. Yet one of the vote’s direct effects has been to increase the salience of – and apparent public support for (if negotiations do not soften the impact of Brexit on the region) – Sinn Féin’s driving political mission of a poll on a united Ireland.

As Brexit has seen the UK government lock horns with the other devolved administrations, the absence of a voice for Northern Ireland raises important questions. The joint report between the UK and EU in December stated that no new regulatory barriers could arise between Northern Ireland and the rest of the UK without the express consent of the Northern Irish Executive and Assembly.

But with no Executive or Assembly in place, it is unclear how consent or dissent could be sought across communities. It remains unlikely, though far from a given, that the Assembly will exist to give its say on the agreement before March next year.

Similarly, the Good Friday Agreement itself states that terms will be agreed between “appropriate Assembly representatives” – one assumes from both communities in Northern Ireland – when co-ordinating on EU issues.

As a result of the current composition of the UK parliament, the government’s agreement with the DUP and the lack of an assembly in Northern Ireland, Brexit is flexing the structures that are supposed to ensure cross-community representation.

The DUP’s position on Brexit doesn’t necessarily create a binary choice for the government between unionism and a plausible deal for Britain to leave the EU. But it certainly puts these two governing priorities in direct conflict.

By Matt Bevington and Alan Wager, researchers at The UK in a Changing Europe. This piece originally featured in the ‘Brexit and the island of Ireland’ report.