The economics of Brexit: What have we learned? 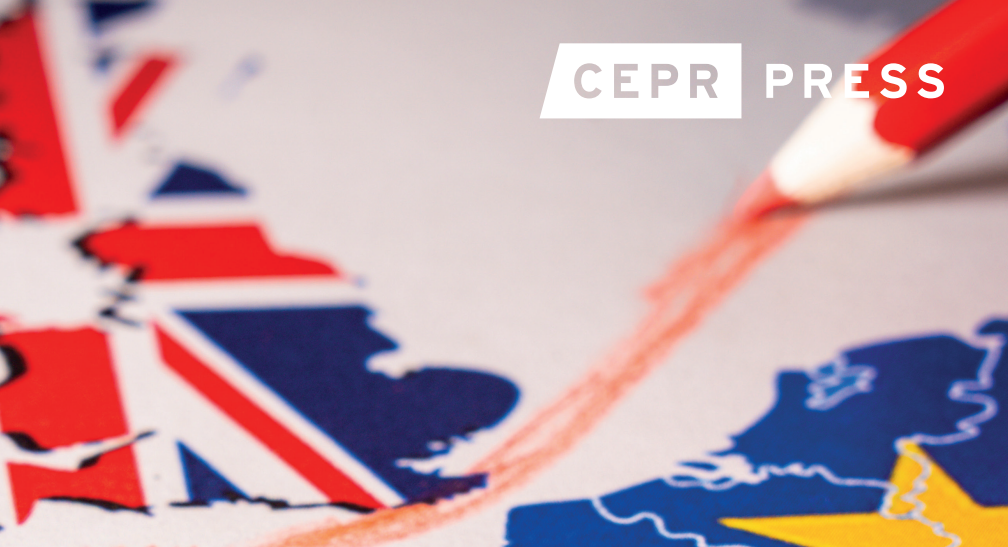 A new eBook, produced by VoxEU/CEPR and UK in a Changing Europe, brings together leading academic researchers on trade, immigration and political economy to assess what we have learned, 18 months on from its implementation, about the impacts of Brexit on the UK economy.

The UK-EU Trade and Cooperation Agreement (TCA), while providing for zero tariffs and quotas on traded goods, implies a major increase in trade barriers and trade costs in goods and services, as well as new restrictions on migration flows.

As Adam Posen and Lucas Rengifo-Keller put it in their chapter, the UK was far more open to trade and immigration, and attractive to FDI, before Brexit. Or, as they pithily summarise, “Brexit means that the UK has declared a trade war on itself”. And with the interregnum between the referendum and the implementation of the TCA over, we can now look at data, albeit early and noisy, on the results.

Two of the chapters focus on trade in goods. Rebecca Freeman, Kalina Manova, Thomas Prayer and Thomas Sampson analyse both the period between the Brexit referendum and the end of 2020, and the first year of trade under the TCA. On the first, they find no evidence of a statistically or economically significant decline in the UK’s trade with the EU relative to the rest of the world.

By contrast, the actual introduction of the TCA caused a major shock to UK–EU trade, with a sudden and persistent 25% fall in UK imports from the EU, relative to the rest of the world. There is only a smaller and temporary decline in relative UK exports to the EU, but nevertheless a large and sustained drop in the number of trade relationships between UK exporters and EU importers.

Similarly, Jan David Bakker, Nikhil Datta, Josh De Lyon, Luisa Opitz and Dilan Yang find that impacts are quite different by sector and destination. First, they note that UK imports from the EU have fallen both in absolute terms since the referendum and relative to imports from non-EU countries since the TCA’s implementation. This is not the case for exports, where trade with the EU has followed a similar path to trade with non-EU countries so far.

However, focusing on the food industry, the authors show that products more reliant on imports from the EU in 2015 saw larger increases in prices than those less reliant on the EU both immediately after the 2019 election – when it was confirmed that the UK would leave the Single Market and Customs Union – and the implementation of the TCA in January 2021. Using a differences-in-differences approach, they estimate a 6% increase in food prices due to Brexit over the two years to the end of 2021.

The chapter by Meredith Crowley, Lu Han and Thomas Prayer explores the implications of preferential trade arrangements for market power, pricing, and consumer welfare. They show that in imperfectly competitive markets, tariff reduction impacts prices not just directly but also by encouraging the entry of new exporters via competitive pressures. Corresponding, increased tariffs (or other trade barriers) are likely to have the reverse effect. While the data used by both Freeman et al. and Bakker et al. reflect only the first year of the post-Brexit trading arrangements, their results are certainly consistent with the predictions of Crowley et al.

Data on services trade are slower to arrive and less granular than those for goods. Nevertheless, Jun Du and Oleksandr Shepotylo show, using a synthetic differences-in-differences approach, that, in contrast to trade in goods, the period between the referendum and the implementation of Brexit did see a significant Brexit-induced fall in UK service exports, amounting to about 6% in 2019. There is no evidence to suggest that UK businesses have redirected exports from the EU markets to those outside the EU, while the apparent beneficiary is Ireland.

Focusing on financial services, Sarah Hall also finds some evidence of a decline in UK exports to the EU, and of the relocation of some financial service activity to the EU, although no one centre has gained disproportionately. And while perhaps 10% of total assets of the UK banking system have moved, a far smaller proportion of jobs or value added has been lost.

In my chapter, I describe the new migration system, which does indeed represent a very significant tightening of controls on EU migration compared to free movement. However, compared to the current system – and in contrast to earlier predictions – the new proposals represent a considerable liberalisation for non-EU migrants, with lower salary and skill thresholds, and no overall cap on numbers.

So, the new system does not represent an unequivocal tightening of immigration controls. Rather, it rebalances the system from one which was essentially laissez-faire for Europeans, while quite restrictionist for non-Europeans, to a uniform system that, on paper at least, has relatively simple and transparent criteria. Indeed, the first year of the regime has seen a significant rise in work visas issues compared to pre-pandemic levels, particularly in the health sector, and an even larger rise in the number of international student visas. I conclude that there is some cause for optimism about the economic impacts of the new post-Brexit UK immigration system.

Madeleine Sumption concurs with my analysis of the overall impact of the new system and focuses in particular on the impact of this ‘rebalancing’ on low wage sectors that were previously very dependent on EU workers. She finds that many employers in industries that previously relied heavily on EU migration are finding it difficult to recruit, although Brexit and the end of free movement is not the only factor at play here, with broadly similar patterns also observed in other high-income countries.

Perhaps surprisingly, despite anecdotal evidence, there is very little evidence so far that shortages are translating into sustained higher wages in the affected sectors. Indeed, she notes that the hospitality industry, which saw the largest percentage declines in EU citizen employment from June 2019 to June 2021, was also one of the industries with the lowest wage growth during that period.

The analyses described above are very much a preliminary and incomplete account of the economic impacts of Brexit. In some cases, they raise as many questions as they answer. Nevertheless, the overwhelming weight of the evidence presented suggests that – very much as economists predicted – Brexit has made the UK a less open economy, reduced UK trade in both goods and services, and increased prices for some products.

By Jonathan Portes, Senior Fellow at UK in a Changing Europe