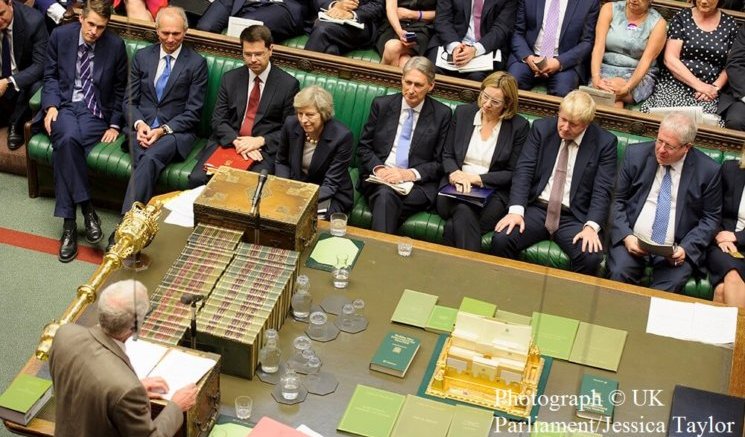 Last week the government released its White Paper on Brexit. As many had expected, it is basically content-free: it’s essentially Theresa May’s recent speech, in some cases word-for-word, with a few statistics and graphs added. David Allen Green has pointed out that the initial version of the document was time-stamped at about 4am, giving the strong impression it was written overnight by an intern working to a deadline in a student-like coffee-fuelled flurry.

The paper begins with a collection of sentence fragments from the Prime Minister, centring on the dubious claim that 65 million people are “willing” Brexit, simply ignoring the 48% who voted against it.

There is then a little bit of detail on plans for the ‘Great Repeal Bill’, which will convert existing EU law into UK law. This White Paper confirms that there will be a further White Paper on that Bill. Interestingly, it says that ex-EU law should be interpreted post-Brexit “in the same way as it is at the moment”. This suggests that the case-law of the EU courts will continue to be relevant, even though those courts are loathed by many Brexiteers. It remains to be seen exactly how this approach to interpretation will be secured outside the EU; and two obvious questions aren’t answered: what about post-Brexit EU case law, and what about EU legislation which is amended after Brexit?

After Brexit, it will be up to the UK to amend ex-EU law. But who will have the power to do this? There’s a little bit of detail about this key question. Any “significant policy change” will be the subject of an Act of Parliament, which means that both Houses will have a full debate and every chance to table amendments or block the government’s plans.

Moving on to devolution, the White Paper details various means of talking to the devolved administrations – ignoring the simple fact that the government has already ruled out following any of a number of options (discussed here) which the Scottish government presented in December.

There’s a special section on Northern Ireland, listing facts but not giving any idea of how reinstating border checks between the Irish Republic and Northern Ireland can be avoided. In passing, this section refers to the common belief that the status of Irish citizens in the UK is guaranteed by the Ireland Act 1949. As far as immigration status is concerned, this is questionable, as detailed here by Professor Bernard Ryan.

Next, the White Paper deals with immigration, referring to “public concern about pressure on public services, like schools and our infrastructure, especially housing, as well as placing downward pressure on wages for people on the lowest incomes.” There’s a mysterious absence of statistics to back up these claims, perhaps because they are shaky: see this recent summary of economic literature on migration, by Professor Jonathan Portes.

It’s striking that this section refers to possible ‘phased implementation’ of new rules on immigration of EU citizens. This seems to be the euphemism for an interim agreement with the EU – which would presumably entail retaining a limited version of free movement of people for a time. The issue is likely to be a key bargaining point in negotiations.

The next section deals with existing UK/EU migrants. The government repeats its mantra that it wants to secure their status, but there are no specifics on what “securing status” means. The banality of political waffle could not be waived to suggest anything more concrete for millions of people worried about their future. (For detailed suggestions on this issue, see the recent British Future report, discussed here).

Moving on to employment rights, the White Paper repeats a government promise to retain EU employment protection. But as I noted above, there’s no mention of safeguarding those rights by means of needing an Act of Parliament to amend them. As others have pointed out, there are weasel words here: “strengthening rights when it is the right choice for UK workers” and “maintain the protections and standards that benefit workers” (emphases added). There’s a definite “fox in charge of the henhouse” vibe here – quite literally so, if we remind ourselves of cabinet minister Liam Fox’s attitude to EU employment regulation.

This section includes the usual assertions about UK employment law being better than the EU version. This is true in some ways, and there are some issues that EU law has nothing to do with (for instance, the minimum wage, which the White Paper discusses). Yet, as I discuss in detail here, there are a number of areas where EU case law extended workers’ rights in the UK: holiday pay for UK workers with fixed term contracts, who are on commission or have extra allowances, to take just one example.

Moving on, the section on trade and economic cooperation re-iterates the intention to sign a free trade deal without considering the relative advantages of staying part of the single market. The statements about future EU/UK cooperation are mostly empty, though. The government wants “civil judicial cooperation” to continue with EU – but in which areas? There are general EU rules on civil and commercial judgments, but also specific rules on insolvency, recognition of divorce and child access rulings, and maintenance payments.

Similarly, the White Paper lists many EU economic laws, but which would the government like to remain part of: competition law? The EU trademark? The unitary patent? EU data protection law?

The discussion of Euratom, the atomic energy treaty linked to the EU, implicitly suggests that the UK energy industry would benefit from a cooperation agreement with Euratom post-Brexit (see further discussion here). But the government is unwilling to say so, due its general paranoia about revealing its intentions. Yet even Homer Simpson – the world’s most famous employee of the nuclear industry, but also the dumbest – could guess the UK’s negotiating plans here.

Equally, the White Paper supplies interesting statistics on the usefulness of EU criminal and policing laws, and asserts the government’s continued interest in playing a role in EU foreign and defence policy. Yet again, there’s no detail on what the UK would like to participate in.

Overall, the White Paper is largely devoid of content because the UK government’s concern about negotiating secrecy. While of course some of the government’s position needs to remain confidential, I have to point out that treaties aren’t negotiated with actual playing cards. They are negotiating by tabling draft texts – and so the EU is bound to see what the UK is asking for, once talks start.

The government may in fact be concerned about a different issue: being embarrassed in front of the British public, by asking for things it doesn’t get. But here, it’s being a little naïve. In my experience, officials from the EU and its member states love to talk. And little birds leak a regular flow of EU documents to the Statewatch website. Even if UK officials keep as quiet as mice, the EU side will sing like canaries.

By Professor Steven Peers, School of Law at University of Essex.