The end of the EU affair: the UK general election of 2019

The general election of 12 December 2019 meant that, after three and half years of political wrangling, the UK finally left the European Union.

In an article recently published in West European Politics, I explore some of the factors that lay behind the outcome of the election, and argue that it can largely be explained by the continuing importance of Brexit.

In Electoral Shocks, a book published earlier this year, my co-authors and I argue that the 2016 EU referendum was a profound shock to electoral competition in Britain. ‘Second dimension’ issues such as European integration have long played an important role in determining vote choice in Britain.

Before the referendum, however, the effect of these issue was to drive party system fragmentation – peeling off voters and sending them to the smaller parties. Vote choice between the Conservatives and Labour remained largely driven by traditional economic left–right concerns.

After the EU referendum this changed. With European integration now the central issue of British politics, it drove voters back to the two major parties, and structured vote choice between them.

Between 2015 and 2017 voters on both sides of the Brexit divide began to sort themselves into the two major parties.

The 2019 election can be understood as a continuation of this sorting process on the Leave side, and a reversal on the Remain side.

Amongst Leave voters, 73% supported the Conservatives in 2019, with the bulk of these new recruits coming from Labour. On the Remain side, support for Labour dropped to 50%, with the main beneficiaries being the Liberal Democrats, who increased their share of Remain voters from 12% in 2017 to 21% in 2019. 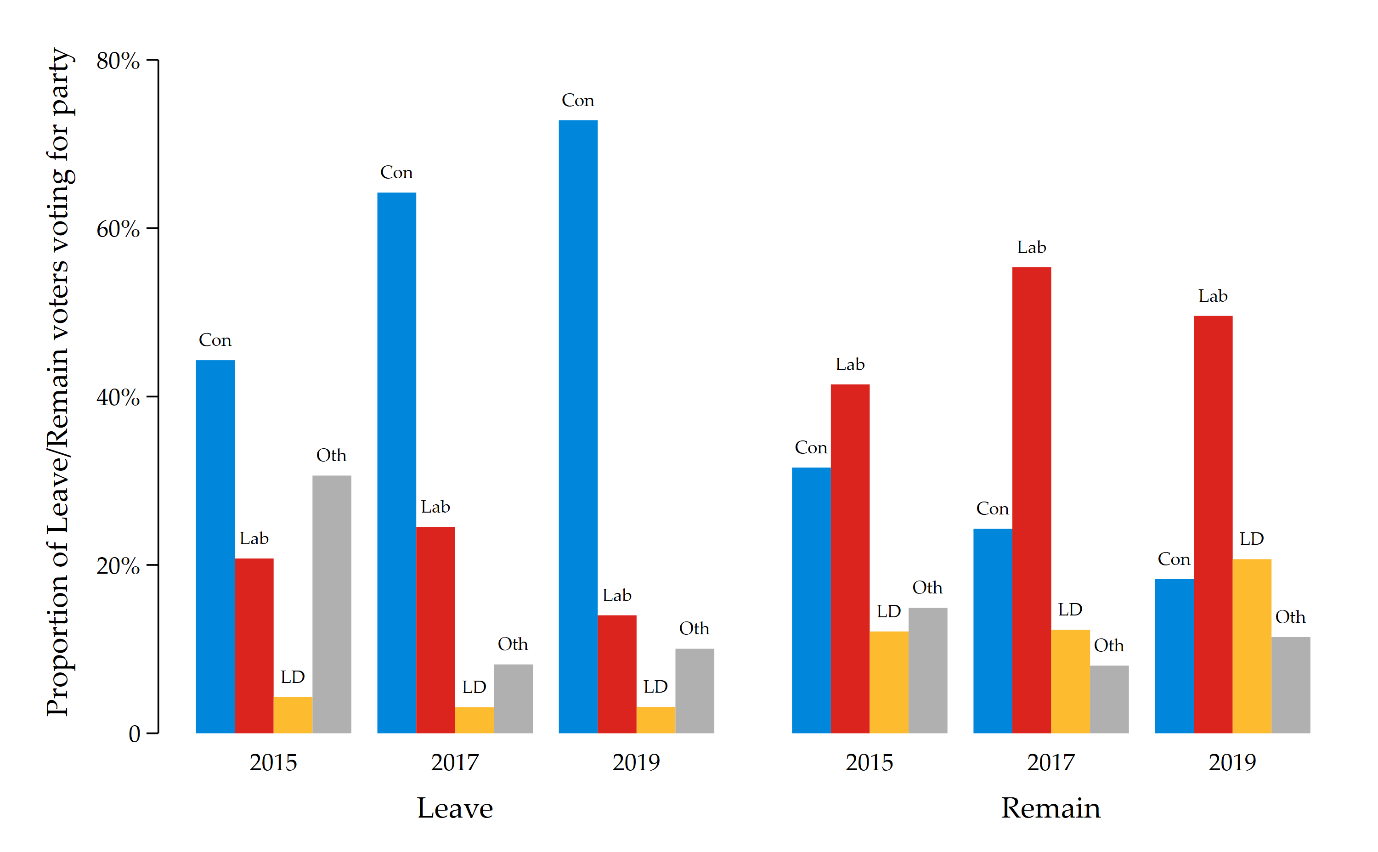 PROPORTION OF LEAVE AND REMAIN VOTERS IN THE 2016 EU REFERENDUM VOTING CONSERVATIVE (CON), LABOUR (LAB), LIBERAL DEMOCRAT (LD), OR SOME OTHER PARTY IN 2015, 2017, AND 2019 AMONGST THOSE WHO VOTED IN BOTH THE REFERENDUM AND EACH ELECTION. Source: British Election Study.

Of course, Brexit was not the whole story of the 2019 election. As it had in 2017, leadership – in particular the relative unpopularity of Jeremy Corbyn – also played an important role.

Leadership ratings bundle a whole range of considerations – from issue positions, to valence judgements and more intangible qualities like charisma – and so it is difficult to say exactly why Corbyn was so much less popular in 2019 than 2017, but it is abundantly clear that he was, and that this had deleterious consequences for Labour’s vote.

In 2017, Corbyn had been an asset for the Labour party, bringing in voters from both sides of the Brexit divide. In 2019, the opposite was true, with dislike for Corbyn driving Leave voters towards the Conservatives and Remain voters towards the Liberal Democrats and the Greens.

Much has been made of Boris Johnson’s apparent personal popularity, but on average British Election Study respondents actually rated May more favourably than Johnson during their respective election campaigns.

This overall average conceals, however, that opinions about Johnson largely aligned with the Brexit divide rather than cut across it – amongst Remainers, May was more popular than Johnson, whilst amongst Leavers Johnson was more popular than May. In the final week of the 2017 campaign, the mean rating of May on a 0-10 like was 4.4 (3.3 amongst Remainers and 5.7 amongst Leavers).

Brexit fundamentally reshaped the nature of electoral competition at the last two British elections. Whether, and how, Brexit will continue to shape voting behaviour in the UK now that Britain has officially left the EU is impossible to say.

One possibility is that, with Brexit receding into the background, British politics will revert to previous patterns of electoral competition.

Another is that social identities related to Brexit will continue to structure political attitudes, and future elections will see the same battle fought all over again.

A third is that economic and social changes brought about because of Brexit will push new divides to the fore. The nature of the UK’s relationship with the EU once the transition period ends is still unknown, and how any future costs and benefits of Brexit will map onto party competition is unclear.

Britain and the world are being ravaged by the Covid-19 pandemic. The ultimate cost of the pandemic, both of terms of human lives and economic downturn, remains to be seen.

The scale of these costs, and how voters perceive the government’s handling of the pandemic and the economic downturn that is likely to follow, are all likely to feature in political debate.

Exactly how the pandemic will affect voting behaviour is uncertain, but the lesson we should take from the last few elections in the UK is that political shocks can fundamentally alter the nature of electoral competition.

By Chris Prosser, Presidential Fellow at the University of Manchester and Co-Investigator of the British Election Study.