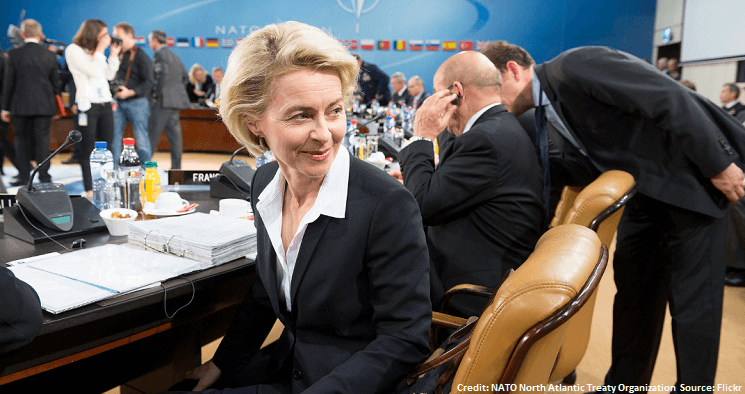 So the European Union, finally, has managed to nominate people to fill its top jobs. The era of Jean-Claude Juncker and Donald Tusk is over. And – of course – the announcements are being interpreted in this country through a Brexit-tinted lens.

Hasty conclusions have been reached about what this latest revolution of the Brussels merry-go-round might mean for us. After all, both men who are being replaced have been key figures in the Brexit story. Save yourself the bother, though – because frankly, it doesn’t mean all that much.

EU leaders have nominated Ursula von der Leyen, pictured, Germany’s defence minister, to replace Juncker as commission president. Charles Michel, the Belgian prime minister, is the new Donald Tusk. But the first thing worth noting is that neither has expressed opinions out of kilter with the broad EU consensus on Brexit.

Von der Leyen has asserted that neither the UK nor the EU wants a no-deal Brexit. Michel was hardly breaking from established orthodoxy in April when he declared any extension granted to the UK should not “open an opportunity for blackmail”. He also stressed: “the longer the postponement, the more the British will have to give guarantees.” The EU doesn’t want no deal, or to be blackmailed. So far, so consistent with the EU line.

It is worth bearing in mind that Michel’s new job does not involve deciding what the European council thinks but, rather, facilitating consensus between the heads of state and government. His predecessor, Tusk, has made it abundantly clear that he does not want Brexit to happen. However, that has remained his view rather than that of the institution he has chaired.

As for Von der Leyen, she has merely been nominated for the post of commission president. An absolute majority of MEPs (at least 376) will have to approve her, with a vote likely in mid-July. Approval is by no means a foregone conclusion. Moreover, even if she is approved, she will not start work until 1 November – the day after the current article 50 extension ends. Michel, for his part, will only start on 1 December.

And – perhaps the key point – what happens with Brexit will ultimately depend not on the EU institutions but on national governments in national capitals. It is, after all, these governments that provide the commission – whoever its president might be – with the guidelines that structure the EU’s approach and have the final say over any concessions.

Both Jeremy Hunt and Boris Johnson seem to think they can persuade these member states to revisit the Irish backstop. But the route to this outcome lies primarily through Dublin, not the Berlaymont. The Irish government, if confronted with a choice between no deal and a revised backstop, will have some difficult decisions to make.

The EU has made it pretty clear that, in the event of no deal, it would be up to Dublin to come up with a plan to ensure the integrity of the single market. Either that, or Ireland will face checks on its own goods going into the rest of the bloc, unless there are checks between Northern Ireland and the Republic. Should Dublin budge, then the other member states might flex too, giving the commission leeway to pursue a different strategy.

And in the event that no quick agreement is reached on a revised deal, it will be the member states again who must decide whether to accept any request for another Brexit extension from Westminster. While Michel will chair those discussions, he will not get a vote, and so will not ultimately have a direct say over our fate.

Looking further forward, assuming the UK ultimately leaves the EU, the latter’s institutions will of course play important roles in shaping our relations with the Union. The commission will take charge of future relationships negotiations, acting on the basis of guidelines provided by the member states, and it would be Von der Leyen who ultimately decides how the commission manages that process.

What has happened in Brussels doesn’t matter for us. But, for the moment at least, it certainly does not matter as much as some people seem to be claiming.