The EU Withdrawal Bill: the House of Lords has its say…..but will MPs Listen? 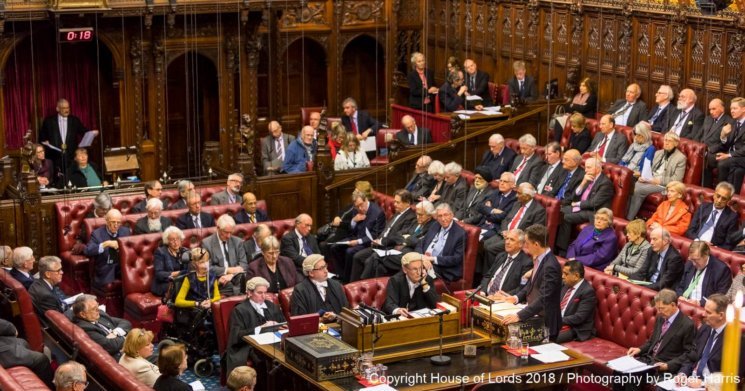 Having suffered only one defeat in the Commons, on Dominic Grieve’s amendment giving Parliament a meaningful vote on the final deal, the Bill was always likely to have a less smooth passage in the Lords where, unlike the Commons, the government has no majority.

As a consequence, 14 amendments were passed by peers at Report Stage which, if they were to be accepted by the House of Commons, could fundamentally alter the UK’s arrangements for leaving the EU.

Some of the amendments passed by the Lords – for example retaining aspects of the Charter of Fundamental Rights – are unlikely to be accepted, given the current lack of a coherent cross-party consensus in the Commons.

It is still possible support for the EEA amendment proposed by Labour peer Lord Alli may find some traction in the Commons, especially if Labour MPs follow the Labour Peers and defy their party whip.

However two amendments, out of the 14 accepted by the Lords, stand out and are likely to create problems for the government – primarily because of the existence of cross party support for the amendments in the Commons.

The first is Lord Kerr’s proposal that the government set out arrangements for a new customs union with the EU. This amendment requires the government by 31 October 2018 to provide a statement to Parliament outlining the steps it would take to negotiate a custom union.

If accepted by the Commons, this would require the government to be quite specific about its intentions for a future customs union. This would give Parliament a significant degree of control over the government’s negotiating position on the customs union and future UK/EU trade negotiations more generally.

In the Commons, the question is whether the government can secure a parliamentary majority to overturn the Kerr amendment. Here the government may have problems.

A significant number of its own backbenchers have already declared their support for a separate amendment to the Trade Bill proposed by Anna Soubry which, if accepted, would require the UK to remain in a customs union post Brexit.

Furthermore, as Labour policy has evolved in recent months to embrace the UK remaining in a customs union with the EU, the pressure over the custom union will be piling on the government.

Against this political background, the government is under pressure from within its own party to stick to one of its Brexit ‘red lines’, with ‘hard Brexiteers’ having recently threatened to bring down the government should it agree to remain in a customs union.

Lord Kerr’s amendment is strategic because of the potential broader impact upon Parliament. The amendment would undoubtedly increase parliamentary control over the executive during UK/EU trade negotiations, with the government having to provide a detailed negotiating position to Parliament.

However, whether this would ‘tie the government’s hands’ in the trade negotiations remains to be seen. Increased accountability of the executive and the government getting the trade deal it wants should not be seen as mutually exclusive.

For example, under the draft transitional arrangements, which would see the UK remain in the customs union until December 2020, the UK is able to commence negotiations for new trade agreements with non-EU countries.

If the government proposed these transitional arrangements as the starting point for negotiations, with strong parliamentary backing, there may be an improved opportunity for a compromise with the EU that permitted remaining within a customs union while providing some latitude for the UK to negotiate its own trade agreements.

However, one note of caution needs to be added: a twenty-month transitional period, during which time it is extremely unlikely that new trade agreements are negotiated by the UK, is fundamentally different from a permanent agreement that would enable the UK to do this. In any final trade deal, the EU may be less willing to concede this point.

Secondly, the Kerr amendment has created a much needed opportunity for a broader debate about the pros and cons of staying in a customs union. The same can be said about Lord Alli’s EEA amendment.

These amendments will spark public debate about the potential economic consequences of being outside the customs union and EEA.

The very fact that Labour Party policy has already changed on remaining within a custom union would indicate that external factors beyond Parliament may still influence party positions on Brexit within Parliament.

In addition to the Kerr amendment, the government is facing further difficulties on the question of a meaningful vote for Parliament. An amendment, proposed by Conservative peer and former minister Lord Hogg, has attracted cross-party support. It would prevent the UK from leaving the EU without a deal and would crucially require the government to go back to the negotiating table if Parliament rejected the government’s deal.

The government has repeatedly stated that if Parliament rejects the deal then the default position is that the UK leaves the EU with no deal with no further negotiation.

Why should the vote on the Hogg amendment be considered significant? Firstly, there is no guarantee that the Commons will overturn it.  Once again, the parliamentary arithmetic could be against the government.

In a broader context, the Lords’ vote should also be seen as an amendment that will enhance the ‘meaningful vote’ amendment to the EU Withdrawal Bill which was approved by the Commons in December 2017.

It provides flesh on the bones of the Grieve amendment by prescribing how Parliament could control the executive in the event of it not approving the final deal.

The Hogg amendment has one further potential consequence for MPs, particularly Conservative MPs against the final deal who may be uncomfortable voting against it if likely to lead to the UK leaving the EU with no deal.

If supported by MPs, Lord Hogg’s amendment may provide a compromise for wavering Conservative MPs. They could be confident voting against a Brexit deal without the risk this would automatically lead to a ‘no deal’ outcome.

Moreover, such a say for MPs over the final deal would be highly likely to attract cross-party support leaving the government with a parliamentary battle to overturn this amendment.

It is of course open to the Commons to reject all 14 amendments to the EU Withdrawal Bill which have been passed by the House of Lords. This would be the ideal outcome from the government’s perspective. However, these three key Kerr, Hogg and Alli amendments have complicated the government’s position.

Should MPs choose to listen to the Lords and approve these amendments then the government faces the prospect of trying to deliver its Brexit legislation through a Parliament which has expressed its view that it does not support the government’s objectives.