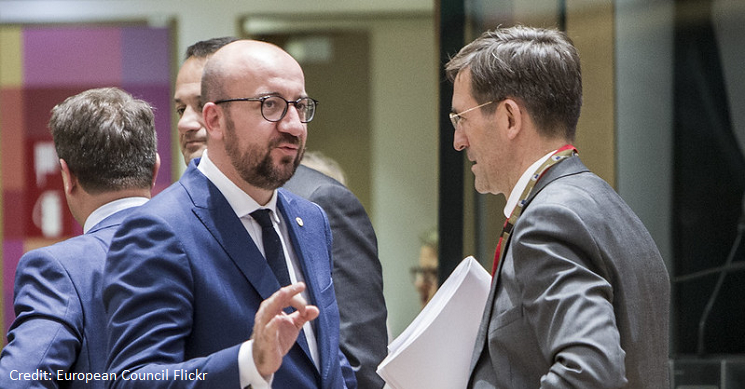 For the first 35 years of its existence, the European Council worked as other Council formations and was chaired by the holder of the six-month rotating presidency. The permanent role has only existed since the Lisbon Treaty came into force ten years ago this week.

So how has the role developed in this time?

Initially, there were different arguments for and against a permanent president.

An Anglo-French alliance hoped a ‘leader of EU leaders’ would give some oomph to EU decision-making and allow for more strategic thinking by having someone whose sole focus was driving the work of European Council.

The problem was that the rotating presidency was seen to lead to an erratic agenda, with each incoming presidency pursuing its own priorities and pet issues without the time or resources to properly implement them.

Disagreements over what the role would become

An appointed European Council president was also part of the imperative for institutional reform driven by the upcoming ten‑country expansion of the EU in the early 2000s.

Others argued, positively, that a permanent president would Europeanise the role, creating an EU-level, rather than national, leader.

The view from many smaller member states, notably the Benelux countries, was precisely the opposite.

From their perspective, a powerful president could disrupt the community method of consultation and consensus building, and create a powerful political leader who might, in concert with the larger member states, ride roughshod over their interests.

Who to call to speak to Europe

The predominant expectation seemed to be that the new presidency would produce a strong leader.

Some expected that the European Council president ‘may be seen as an alternative source of power competing with the Commission.’

British foreign secretary David Miliband thought the president should be ‘someone who can do more than simply run through the agenda’ and become the person to call if foreign leaders wanted to ‘speak to Europe’.

Tony Blair was initially in the running, and seemed to fit these criteria, but his role in the Iraq war made him a toxic figure in many member states.

This town ain’t big enough for all of us

In the end, EU leaders did not opt for someone who would grab the limelight but a technocratic administrator in then Belgian prime minister Herman van Rompuy, someone skilled in forging consensus.

As former Belgian ambassador to the EU Philippe de Schoutheete said, it was ‘contrary to all likelihood that the main European leaders would deliberately place a flamboyant personality at the head of the European Council, someone whose presence in the media would overshadow them. As a general rule, that is not how politics works.’

Van Rompuy was chosen precisely for his lack of flamboyance.

The appointment was criticised as being designed mainly not to detract power from the major national capitals.

However, as a president from a small member state Van Rompuy reassured others that the role would not be used to undermine consensus decision making.

As his former advisor Luuk van Middelaar describes, Van Rompuy’s abilities were being able to forge consensus and ‘convince without arm twisting’. He has also been described as ‘conciliatory’ and ‘transactional’.

Furthermore, his ability to ‘sit through countless hours of meetings’ was seen as an ‘essential attribute’, as well as his economics background which stood him in good stead when it came to dealing with the euro zone crisis.

Keeping it in the family

Of course, the role still requires a degree of stature. The first three occupants have all been previous national leaders and former European Council members.

As such, they have been familiar with leaders’ personalities and negotiating styles, and they understand the institution both procedurally and, more importantly, culturally.

As the first occupant of the role, Van Rompuy looms large. However, his successor Donald Tusk was a distinctly different politician.

As Desmond Dinan summarises, one came from a small, older member state, the other a large, new member state. Van Rompuy came from a eurozone country, Tusk didn’t. The Belgian hailed from a consensus-and-compromise political tradition, Tusk from a confrontational one.

In terms of character, Dinan says, ‘Van Rompuy is unassuming and self-effacing; Tusk is assertive and forceful.’

Nevertheless, Tusk did not transform the role, despite notable differences.

Tusk called 22 summits during his tenure, five less than Van Rompuy, who was often criticised for calling too many. But having dealt with the height of the eurozone crisis, Van Rompuy wasn’t necessarily more trigger happy than Tusk.

The advantage Tusk did have was that he was a member of the European Council throughout Van Rompuy’s presidency, which meant he understood first hand leaders’ frustrations and also had seen Van Rompuy’s approach close up.

Moving on from crisis management

The tenures of both previous European Council presidents were marked by crisis management, most notably the eurozone and migration crises, and of course Brexit.

Reflecting on his presidency, Tusk suggested recently that there was an ‘anti-eastern choir’ during the migration crisis, which he had resisted. This captures one of the key functions of the European Council president: preventing breakdown.

Despite a new institutional cycle, a more benign economic context and new leaders, there will be no shortage of divisions to manage between member states over the next few years.

The migration issue is unresolved, there are deep disagreements on economic policy and there are fundamentally divergent views about how the EU should develop in future.

The job, ultimately, is about helping EU leaders to take collective decisions. In a European Council in which the leaders and the most salient issues are constantly changing, there will never be a single template to achieve that.