The European parliament is about to undergo profound change 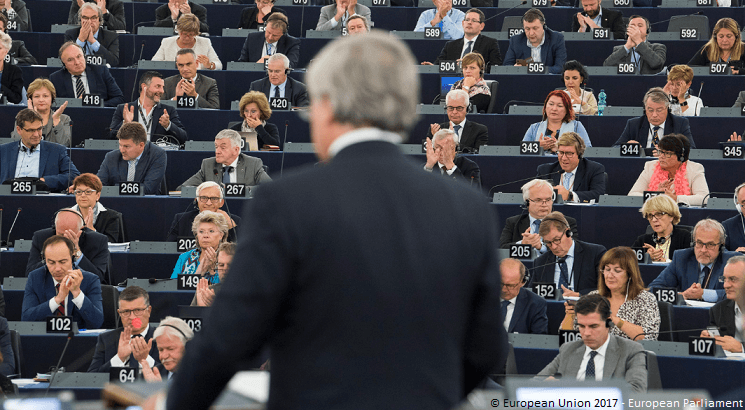 The European Parliament elections are fast approaching, where 28 countries will head to the polls to select their MEPs. All UK attention is on the domestic political implications. Will the Brexit Party triumph? Why are we holding elections when we voted Leave in 2016?

But there is an equally important, even wider question: what will these elections mean for the EU? Here, the answer is worth digging into in some detail. The result could shake up the bloc’s traditional political groupings and change the direction of the policy agenda of the EU going forward, which will have implications for the whole of Europe, including the UK, whether inside or outside the EU.

The overall balance of power between the left and right is unlikely to change very much. But the size of the political groups, and the potential coalitions that will form, are likely to change quite dramatically. The centre-left Socialists and Democrats (S&D) group will be considerably smaller, while the centrist Alliance of Liberals and Democrats for Europe (ALDE) is likely to be larger, especially if President Macron’s La République en Marche! party joins that alliance.

The centre-right European People’s Party (EPP) is also likely to lose seats, although it should remain the largest group in the parliament. Meanwhile, the populist parties on the right of the EPP are likely to be considerably stronger, particularly the new European Alliance of Peoples and Nations (EAPN) group, formed by Matteo Salvini and Marine Le Pen.

The next figure shows the likely changes in the sizes of the key coalitions.

The grand coalition between the EPP and S&D, which has traditionally dominated the parliament, is likely to fall below a majority of seats in the parliament for the first time: down to about 44 per cent of seats. A centre-left bloc and a centre-right bloc will also be down considerably. Meanwhile, the “EU critics” – in the groups on the right of the EPP as well as in the radical left European United Left/Nordic Green Left (EUL/NGL) – are likely to win over one-third of the seats. 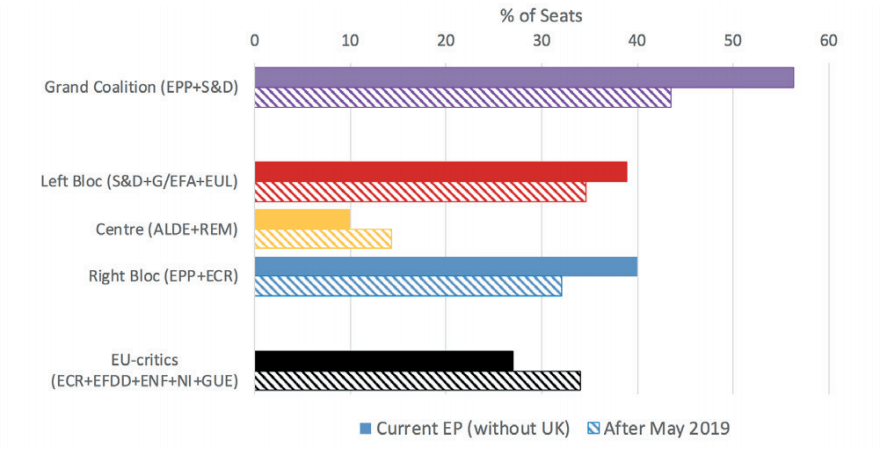 These changes will have immediate effects on the way the EU works. The first action of the new European Parliament will be to “elect” the next Commission president. Although the EU governments in the European Council formally propose a candidate for Commission president, the convention is that that candidate hails from the largest political group in the newly elected parliament—as they did with the most recent two presidents (José Manuel Barroso and Jean-Claude Juncker). If the parliament rejects the nominee of the European Council, leaders must propose a new candidate.

The problem for the governments is that the traditional grand coalition between the EPP and Socialists (S&D) will need to expanded to include the Liberals (ALDE) as well as the Greens (G/EFA). This will be an unwieldy alliance. And the EPP candidate for Commission president, the German politician Manfred Weber, is unlikely to be supported by the Socialists or the Greens.

Most commentators are now expecting a compromise candidate to be chosen, as part of a wider package deal for all the key new offices in the EU: the Commission president, the Council president, the European Central Bank president, the European Parliament president, and the High Representative for Foreign Affairs. There are enough offices to share between these four political groups. But, expect the newly emboldened populists in the parliament, led by Salvini and Le Pen’s MEPs, to oppose this “grand stitch up.”

The outcome of the election, with smaller traditional coalitions and a much more fragmented chamber, will also shape the EU legislative agenda in the coming years. This is because EU legislation in almost all policy areas now requires the majority support of MEPs for it to pass. Legislative coalitions in the parliament have traditionally been formed issue-by-issue, with different coalitions being dominant in different policy areas.

In the 2014-19 parliament, a centre-right coalition – between the EPP, ALDE, and the European Conservatives and Reformists (ECR) – has tended to win on legislation relating to regulation of the single market (such as financial services regulation), reform of the eurozone and international trade agreements.

Meanwhile, a centre-left coalition – between S&D, ALDE, G/EFA, and EUL/NGL – has tended to win on legislation relating to justice and home affairs (such as the free movement of people, and policies towards refugees), environmental standards and international development issues (such as EU spending on development aid).

With the newly fragmented parliament, each of these coalitions will be smaller and majorities will be more difficult to form. As a result, populist EU-critical MEPs, particularly on the right, will be able to shape the policy agenda.

These MEPs are also likely to be able to win key policy-making positions in the parliament, such as committee chairs and legislative report-writing roles (rapporteurships). With this new influence, expect these MEPs to demand more restrictive refugee and asylum policies, more spending on EU external border controls, more powers for national governments to run deficits in the eurozone, and more protectionist trade policies.

The headlines across Europe following the elections in May are likely to focus on the electoral gains of the populist eurosceptics across Europe, at the expense of the centrist pro-Europeans. And these gains will matter. The new parliament will be a difficult partner for the governments and the Commission, who will not be able to rely on a stable coalition. The result could be policy gridlock in the EU in the coming years, which could further encourage anti-European sentiments in many countries.

By Simon Hix, Professor of Government at the London School of Economics. This piece is from our report ‘The European elections and Brexit,’ and was originally published in Prospect.