Dramatic changes to the composition of the European Parliament were anticipated before the elections last May. At the extremes, Eurosceptic populists were expected to make great strides, while President Macron hoped to reshape the political centre like his En Marche transformed the party landscape in France.

Further, it was expected that the two ‘dinosaurs’ of European party politics – the centre-right European People’s Party (EPP) and the centre-left Socialists and Democrats (S&D) – would for the first time fall short of commanding an absolute majority in the Parliament.

These developments were expected to upset the rather consensual atmosphere of the European Parliament where decisions are usually forged by big centre-majorities that occasionally tilt to the left or the right.

Instead, the European Parliament would become much more fragmented and polarised: the traditional left-right divide would recede, and contestation would instead be between pro-European centrists (à la Macron) and Eurosceptic populists (à la Marine Le Pen).

Now that the dust has settled, we can make an assessment of whether politics will be significantly different in the new, ninth European Parliament.

When we consider the outcome in terms of the party groups, the drama is limited (Figure 1).

For sure, the two biggest party groups – the EPP and the S&D – each lost around 40 seats, and together they lost their absolute majority. In turn, the biggest winner was the liberal group, renamed ‘Renew Europe’ – on the insistence of Macron.

Besides the support from his En Marche party, its main gains came from a similar start-up party in Romania led by former European commissioner Dacian Ciolos, and the resurrection of the Liberal Democrats in the UK.

However, the other populist Eurosceptic group in the previous European Parliament – Europe of Freedom and Direct Democracy – disappeared, as the Italian Five Star Movement was unable to find sufficient coalition partners and the seats formerly held by Ukip were taken by the newly founded Brexit Party.

On the left, the Greens made considerable gains, particularly in Germany, France and the UK.

Obviously, there are no landslides in the composite electoral system of the EU. Most of the shifts were between groups that are ideologically close to each other. The overall share of the four left-of-centre groups only increased marginally, by 18 seats.

Even though that brought them two seats over the absolute majority, they do not have a stable coalition, especially considering the ideological distance separating the Europe United Left-Nordic Green Left (GUE-NGL) from Renew Europe.

A better indicator of the kind of coalitional politics to expect was offered by the procedure by which Commission President Ursula von der Leyen was elected. Her nomination essentially relied on a coalition between her own party group, the EPP, and Renew – closely mirroring the powerful combination of Merkel and Macron in the European Council.

However, for this coalition to attain the required absolute majority, it needed to look either left or right.

The left-wing option became problematic because the Greens and GUE-NGL announced early on that they would oppose von der Leyen, and among the Social Democrats there was particular resentment against her and the way the European leaders had side-stepped the EP’s preferred candidates among the German SPD.

More forthcoming attitudes were found on the right. The leaders of the right-wing governing parties of Poland (members of ECR) and Italy (in ID) had already been involved in the nomination process in the European Council, and, reportedly, Angela Merkel personally called the Polish Prime Minister to secure the support of his Law and Justice Party.

Eventually, von der Leyen scraped by with a narrow majority of 383 votes. That outcome suggests a considerable number of defectors among all party groups that voted for her, even if the secret nature of the vote prevents a more precise analysis.

Some of this politics of floating coalitions is likely to return this autumn when the EP will need to approve the other Commissioners. Nominees better be prepared for the different grounds on which EP majorities may emerge against them: too left-wing, too right-wing or too closely associated with disreputable regimes.

But it’s doubtful whether much of this antagonism will persist once the Parliament moves to its usual legislative business.

The elections not only failed to provoke major shifts between the party groups, but they also failed to upset the basic ideological structure. This can be illustrated when we plot groups’ ideological positions along two axes: the traditional left-right scale and a scale that runs from fully supportive of to fully opposed to European integration.

Figure 2 offers two notable insights. One is that however much the composition of party groups changed from one parliament to another, as some of its national delegations win and others loose, their ideological orientations are very stable, particularly in the case of the well-established ones.

The second is that there is a clearly identifiable ideological core of pro-integration centre parties (EPP, S&D, Renew and the Greens) that stands in opposition to the Eurosceptic groups at the extreme left and right. As this core continues to command more than two-thirds of the Parliament, it is among them that the legislative compromises are found and the crucial decisions are taken. 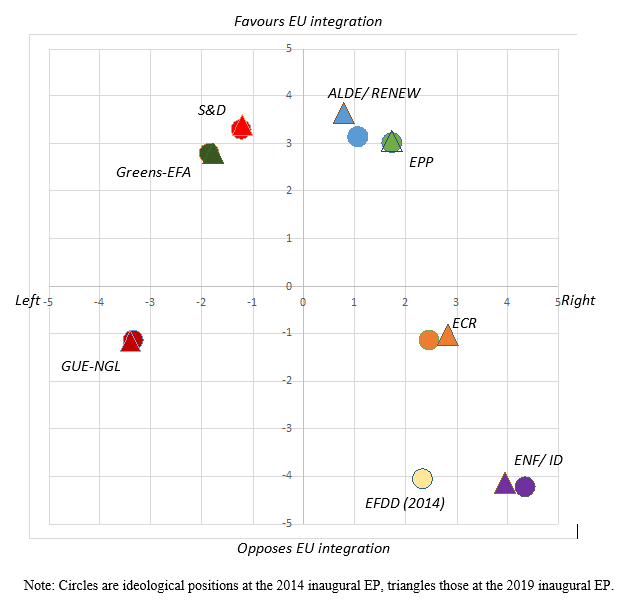 On the whole, then, we can expect decision-making in the European Parliament to continue to be run by a broadly pro-integration centrist coalition.

The fact that the two main party groups (EPP and S&D) can no longer command an absolute majority is mostly of symbolic importance. Even if their decline is likely to continue in future elections, the Eurosceptic opponents remain far from even constituting a blocking minority, let alone building a constructive majority of their own.

Will Brexit make a difference?

After Brexit, the UK’s 73 seats will be reallocated, and there are 27 parliamentarians waiting to fill up some of the emptied seats.

Overall, this involves a reshuffle of less than 10% of the total number of seats; hence the consequences are rather limited, even if they affect some party groups more than others. On balance, party groups on the left will lose some MEPs, while right-wing party groups gain a few. As a consequence, the share of the four groups left of the EPP will decline to 47%.

Also in ideological terms, the impact of Brexit on the configuration of the European Parliament will be very limited, especially as more than a third of the present UK MEPs have failed to join a party group. At most, Renew and the Greens will slightly veer to the right as their British members are considered slightly more left-wing than the group average.

By Professor Ben Crum, a Professor of Political Science at the Vrije Universiteit Amsterdam.