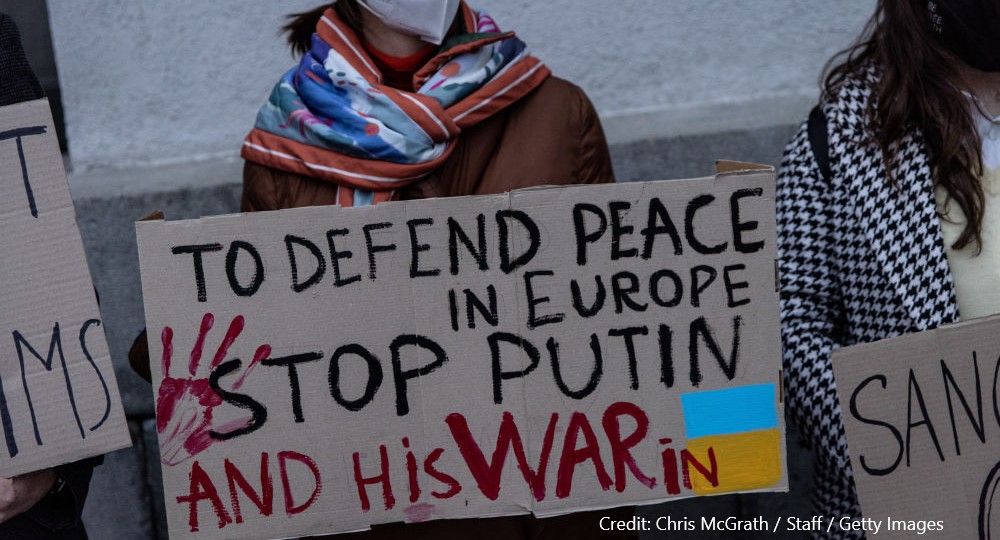 The EU’s response to Russia’s invasion of Ukraine took many observers by surprise. For once, the Union exceeded expectations, and by a large margin. Divisions between member states melted away quickly in the face of Russian aggression, and the Union adopted a set of sweeping sanctions on Moscow. The EU’s High Representative for foreign and security policy, Josep Borrell, hailed the EU’s response to the conflict as a ‘geopolitical awakening.’

Member states also agreed to provide Ukraine with €450 million to acquire weapons – a move labelled by Commission president Ursula von der Leyen as a ‘watershed moment’. The Union is also preparing to welcome large numbers of Ukrainian refugees and seriously looking into how to overcome its reliance on Russian energy.

These are very significant steps for the EU. Its relationship with Russia has undergone a sea change, and will likely enter a phase of protracted ‘cold’ confrontation. However, there are reasons to be wary about the claim that its response portends a broader ‘geopolitical awakening’.

There is a real risk of the EU over-promising and under-delivering. The reliance of many member states on Russian gas means that energy transactions will continue and some Russian banks, including Russia’s largest, remain connected to SWIFT. This will continue to provide Putin with valuable revenues.

It is also still unclear what military assistance the EU will give Ukraine and whether it will arrive in time to make any difference – Borrell’s idea of member states providing Kyiv with fighter jets has already been abandoned.

And, while some EU leaders like von der Leyen have raised Ukraine’s hopes of gaining EU membership, Kyiv’s hopes are bound to be disappointed. Not only is the accession process a long and technically demanding process, but the chance of all member states agreeing to admit Ukraine while it is at war with Russia is virtually zero, as it could trigger conflict with Moscow.

Sustaining a united response could also prove to be more difficult for member states than agreeing one, especially if the economic costs of sanctions hit European citizens hard, or if the risk of a direct military clash between the West and Russia rises as the conflict continues.

The emergence of the EU as a stronger geopolitical actor depends on whether member states are willing to pay the costs of doing so. To sustain higher defence spending in the face of competing spending priorities, and to ensure that the economic impact of sanctions is manageable, the EU will have to relax its fiscal rules, or to embark on another round of joint borrowing.

At the same time, the EU will only emerge as a stronger military actor if member states see it as the framework though which to deepen integration.

Military integration could develop through NATO or in small groups of states instead; indeed, it seems likely that the need to keep the US firmly anchored in European security will further entrench NATO’s primacy and diminish calls for a bigger role for the EU in hard security matters. This would push the Union to focus its efforts on softer elements of security, like cybersecurity, and on fostering more joint defence research and procurement.

The most consequential integration step in EU foreign policy would be removing the need for unanimity between member states – but changing that rule requires unanimous agreement, which seems far from certain to materialise.

So long as each state has a veto, the crucial factor in shaping the EU’s strength as a geopolitical actor will remain its ability to reach consensus on a case-by-case basis. And we should not underestimate just how favourable the circumstances of Russia’s aggression were to generating EU unity – and how unique.

First, there was no ambiguity about who was responsible for starting the conflict. Putin’s completely unprovoked invasion of Ukraine united member states in a manner that would have been much harder to achieve had Putin launched more limited or covert military operations.

The EU already had a very poor relationship with Russia, which was under a significant regime of sanctions after its 2014 annexation of Crimea and intervention in the Donbas. Meanwhile, Ukraine, which has been drawing closer to the EU since 2014, could hardly have appeared more restrained and worthy of European support.

Second, Russia’s attack on Ukraine posed a real danger to the EU’s security, as it directly threatened EU member states which border Russia and Ukraine. This put extensive pressure onto the other member states to respond resolutely.

The EU’s reaction to the invasion was not only about defending Ukraine or principles of international law, but also about reducing the concrete risk of future Russian aggression towards the EU itself.

Third, the EU was, to a considerable extent, following Washington’s lead in responding to Russia’s actions. The US provided the broader diplomatic and military policy framework within which the EU could develop a strong response. Washington also helped generate EU unity, pushing sceptical EU states to respond robustly to Russia’s aggression. Vetoing sanctions was unthinkable.

In coming years, the EU may be faced with conflicts very different in form from Russia’s invasion of Ukraine. They may be civil wars, without such a clear aggressor and worthy partner to support; they might not directly threaten and mobilise such a broad group of member states; and the US might decline to become involved, instead of providing a comfortable blanket of leadership for the EU. Divisions between member states may be much harder to overcome.

None of this is to downplay the significance of the EU’s response to Putin’s attack on Ukraine. Just two weeks ago it was difficult to imagine the EU responding in such a robust manner, and it may well be that the conflict will spark further integration in security and defence. But it is simply too early to be sure about that.

By Luigi Scazzieri, Senior Research Fellow at the Centre for European Reform.