What is the energy price cap?

The ‘default tariff cap’ – widely called the energy price cap – determines the maximum price per unit customers can pay for gas and electricity. It applies to customers on ‘variable’ or ‘default’ tariffs – where rates fluctuate in response to market forces and was originally introduced in 2019 to protect consumers who did not change to cheaper offers or were unable to switch.

The cap is usually updated every six months, based on the UK energy regulator Ofgem’s estimates of the costs faced by energy suppliers, and allows for some supplier profit. The cap only limits the price charged per unit of energy, not the overall bill a customer pays, which depends on overall use.

Ofgem expresses the cap in terms of the cost for a household with typical energy usage. On this measure, the first default tariff cap in January 2019 was £1,104, before fluctuating over time to reach £1,277 by October 2021. In April 2022, this shot up to £1,971 and the latest forecasts suggest it will rise to £3,582 in October 2022 and £4,266 in January 2023. Ofgem will now set a new cap every three months instead of six due to the rapid rate of change in costs – which could mean prices rise faster – but also should mean any future falls in the price of energy are more quickly passed to the consumer. 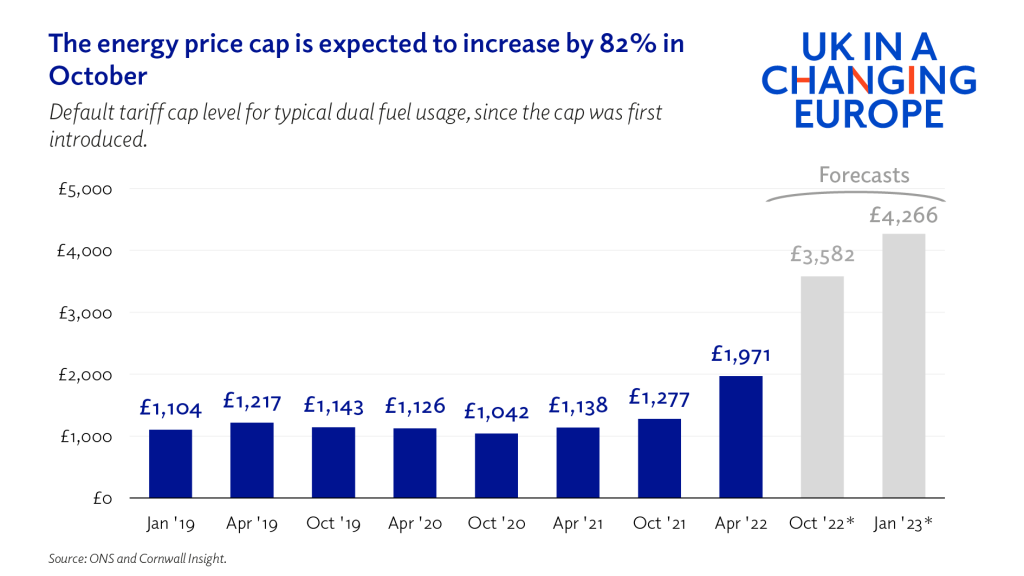 There are several reasons for this dramatic increase. First, wholesale energy prices increased significantly from mid-2021 (meaning energy suppliers had to pay more to buy gas and electricity). This was due to growing global demand post-lockdown and other supply issues relating to gas in particular. Russia’s invasion of Ukraine inflated prices further as Russia cut gas supplies to European countries, who are themselves trying to reduce their reliance on Russian gas. Wholesale gas prices are now ten times higher than a year ago.

Because the price cap is not deemed to be enough to protect people from rising bills, it has been supplemented by further measures. These are set out in our explainer on energy price support.

What is an Autumn Statement?

What is fiscal drag?

What is a three-line whip?

BACK TO ALL FACTS