The February 1974 election: a hung Parliament and the promise of a referendum on Europe 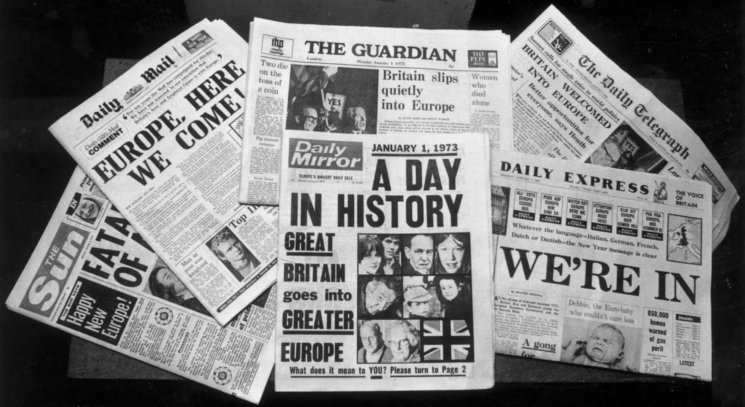 Forty five years ago this month, Prime Minister Edward Heath was forced to call an election nearly a year and a half before he needed to.

Against a backdrop of severe economic problems, near-civil war in Northern Ireland, and – above all – acute industrial strife, the February 1974 election was a watershed in post-war British political history resulting in the first hung parliament since 1929.

It consigned the previously universally accepted post-war settlement to the intensive care unit, ultimately leading to its demise in 1979. In addition, the election presented to the British voters a novel manifesto commitment; a referendum on staying in, or leaving the European Economic Community (EEC).

Like David Cameron in 2015, Harold Wilson had been forced to capitulate to the left-wing of his party and commit to renegotiating the terms of Britain’s membership of the EEC, and then holding a referendum.

With hindsight, Heath was an unlucky Prime Minister. Events conspired to knock him off course from delivering on his radical policy agenda with which he won the 1970 election.

The collapse of the Bretton Woods system of international fixed exchanges, the quadrupling of oil prices by OPEC as a result of the Yom Kippur war in 1973, and the explosion of violence in Northern Ireland would have presented enormous difficulties for any government.

It is how governments respond to such challenges that define their success or failure. In 1972, with unemployment hitting the previously unthinkable level of one million, Heath embarked on a dash for growth by reversing his previous policies and pumping demand into the economy.

His response to the inevitable inflation caused by this was to fall back on a statutory incomes policy limiting wage growth, something he had ruled out in the 1970 election. It was his failure to secure backing from the Trades Union Congress for this policy that ushered in the miners strike.

Recent memories of his government’s failed response to the 1972 miners strike caused Heath to act quickly, establishing a state of emergency in November 1973, along with scheduled power stoppages, reduced street lighting, and TV ending at 10.30 at night.  The three-day week started in January 1974.

Despite prolonged negotiations with the miners, the government could not find a solution to the dispute. This precipitated the election set for 28 February, which Heath fought asking ‘who governs Britain?’

Labour’s manifesto was probably the most radical since 1945. Riven by remorse and argument over perceived failures of the 1964-1970 government, the party had shifted leftward under the growing auspices of Tony Benn and his followers, supported by the trade unions.

Together they captured the policy setting machinery of the party. Nowhere was this more visible than on its policy over membership of the EEC

The one great achievement of Heath’s government was joining the EEC in 1973. The Labour party, when in government in 1967, had attempted to join the EEC, but now, in opposition, it became hostile to membership.

Labour’s policy shift caused deep divisions between the social democrat wing of the party, and the far left: Europe became its battleground, and Roy Jenkins’ resignation as Deputy Leader in 1972 symbolised these divisions.

The main thrust of the election campaign was management of the economy, and in particular how to control inflation. The EEC was a contentious issue, and one where the two main parties policies most diverged.

Probably the most notable incident in the campaign was when Enoch Powell, at the time a significant Conservative MP, advocated voting Labour so as to guarantee a referendum on membership.

When the results came in, neither party had an overall majority. Labour had a lower share of the vote, but more MPs, while the Conservatives had more votes but fewer MPs.

Heath spent the weekend trying to do a deal with Jeremy Thorpe’s Liberals and the Ulster Unionists, but to no avail. On Monday 4 March Harold Wilson became Prime Minister for the third time.

Despite the election being held in winter, the turnout increased from 72% in 1970 to 79% – a reversal of the post-war decline in participation. Another significant development was the success of the Liberals, the Scottish Nationalists, and Plaid Cymru.

For the nationalists this would lead to referendums on devolution in 1979, while for the first time since 1945 the two main parties polled less than 75% of the votes.

These changing voting patterns reflected a growing disenchantment and alienation by the electorate with the main parties, and their failure to resolve Britain’s economic and social problems.

Arguably, the election also ushered in the demise of the post-war settlement, built around co-operation between the state, industry, and the unions, with the goals of prioritising full employment and the welfare state through the use of Keynesian economic tools.

It was now apparent this was no longer working. The state was to increasingly prioritise inflation over unemployment, and there was a loss of faith in the effectiveness of Keynesian policies.

In addition, the unions and their membership had become more militant, and politically irreconcilable to the consensual methods of the two main parties.

The successors to both Heath and Wilson, in their own ways, would reject this tripartite approach.

For the Thatcherite right, after capturing the leadership of the Conservative Party in 1975, their focus was on free and efficient markets, with minimal state involvement, and the use of monetarist tools.

For the new left, there was Benn’s alternative economic strategy, embracing full state planning and nationalisations, along with import and price controls, and withdrawal from the EEC, culminating in Labour’s manifesto for the 1983 election.

But all that was in the future. Back in government, what Shirley Williams called Wilson’s ‘brilliant’ mastery of the referendum campaign in June 1975, resulted in the electorate overwhelmingly endorsing staying in the EEC.

For the voters, if not the two main parties, this effectively killed debate on this issue for a generation. Forty-one years later, it was the Conservative Party’s turn to open the Pandora’s Box of another referendum, in a vain attempt to resolve what were now their party’s divisions over Europe.