The first round of negotiations, in four points (of divergence) 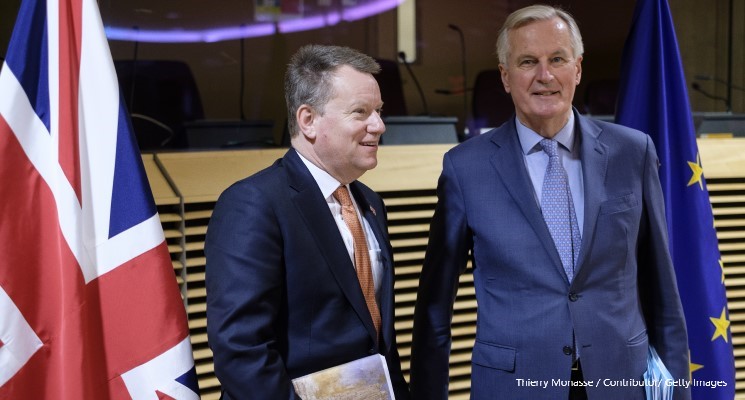 After a long (or not so long, depending on your point of view) wait, the first round of negotiations between the UK and the EU finally took place last week.

Both sides put their initial proposals on the table: on the one hand, the EU put a strong emphasis on the so-called level playing field, and toughened its language around fisheries as Simon Usherwood explained.

On the other, as expected, the UK government’s approach to these negotiations drew further red lines which were analysed by Catherine Barnard.

So, what happened last week? First and foremost, it is essential to keep two points in mind. The first one, as much as it sounds obvious, is that the timing is really, really tight.

We are talking about negotiating a comprehensive free trade agreement that would, under normal circumstances, take years to prepare. In terms of comparison, the Japan-EU Free Trade Agreement took four years to be negotiated.

The second point is that an initial round of negotiations generally tends to be a round of observation, where all parties involved present their positions.

These are then compared and the negotiating teams identify points of convergence and divergence ahead of next round.

Michel Barnier identified four major points of divergence between the UK and the EU.

Firstly, the level playing field demands from the EU are deemed unacceptable by the UK government – it is perceived as an unnecessary ‘transfer’ of sovereignty that would go against the principles laid out in the 2019 Conservative Party manifesto.

However, Article 77 of the (non-binding) Political Declaration clearly states both parties’ willingness to agree on ‘robust commitments to ensure a level playing field’.

The second point of divergence is on criminal justice and law enforcement.

Similarly, the UK changed its mind on the role the European Court of Justice would play in the future relationship.

While the Political Declaration recognised the ECJ’s authority ‘as the sole arbiter of Union law, for a binding ruling as regards the interpretation of Union law’ (Article 131), British demands suggest that any dispute resolution mechanism should not involve this Court.

The third point relates to the governance of the future agreement.

The UK wants to negotiate different sectoral agreements that would not all fall under the scope of the free trade agreement, for instance on fisheries, aviation, energy, social security and nuclear cooperation.

In principle, this does not contradict what is laid out in the Political Declaration: indeed, Article 118 suggests that ‘[w]here appropriate, the Parties may establish specific governance arrangements in individual areas’.

However, Michel Barnier raised some concerns, warning against the impracticality of multiple arrangements that could make the relationship less efficient and less stable in the future.

The fourth and final point is probably the most technical one, and relates to fisheries. That was expected: it is an important sector for both the UK and the EU.

The Political Declaration recognises that the United Kingdom will become ‘an independent coastal state’ (Article 71), but also the need to cooperate on the matter ‘in a non-discriminatory manner’ (Article 72).

The UK does not want fisheries to be included in the free trade agreement (as mentioned above) and requests to hold annual negotiations on reciprocal access to European and British waters.

It is a pressing matter: if the deadline of 1 July 2020 mentioned in the Political Declaration is to be respected, this should be considered as one of the top priorities for the next round of negotiations which will start on 18 March.

This is likely to be a tricky matter, and it would not be the first time such talks reach a dead end: in 2010, when Iceland started accession talks with the EU (before the Icelandic government eventually decided to withdraw its application in 2015), it appeared clear that no agreement would be found on fisheries.

If no agreement on the matter can be found between the EU and the UK, the whole deal could collapse – it is that serious.

So, where does this leave us? Of course, it would be difficult to draw definitive conclusions after four days of negotiations.

Based on Michel Barnier’s speech, it appears clear that both parties want to manage expectations: yes, a deal can be reached, but it is not going to be easy at all.

Cautious optimism is key here, but the divergences between UK demands and what was laid out in the Political Declaration may trigger some headaches in both negotiating teams.

The UK states it is ready to walk away in June if no clear progress is being made, and an extension of the transition period is off the table (for now). To be continued…

By Benjamin Leruth, Assistant Professor in Politics and Society, University of Groningen.