The fractionalisation of Parliament is a source of deadlock. Go to the people. 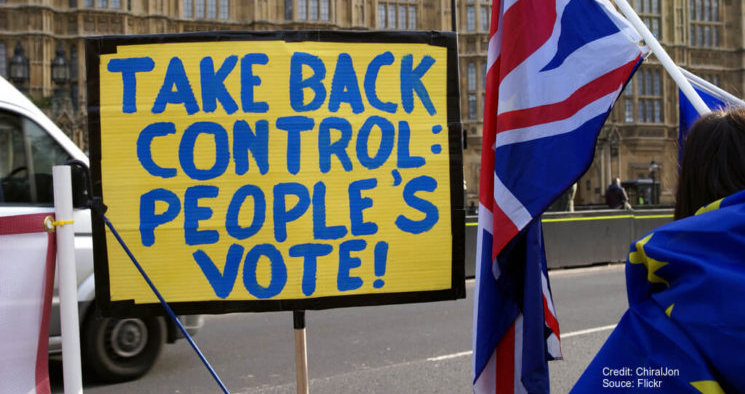 The UK is weeks away from crashing out of the European Union without a deal. Britain seems to be trapped in a never ending cycle of arguing, debating and negotiating with itself, as it has done so often during the Brexit process.

The country is experiencing a major existential crisis. Uncertainty about the future reigns. While the role of the British government in creating this mess has been widely discussed, there is another culprit for the Brexit deadlock who should not go unnoticed: the UK Parliament.

Illusions, as well as positions about Brexit and the Withdrawal Agreement in Parliament abound. Some British MPs believe that the country they serve is a great world power that can afford to crash out of the EU.

The costs of a no deal Brexit, they argue, might be significant, but only short term. People should not buy into project fear.

Britain will rise again, and fast, as a global power. MPs who voice such opinions constitute a minority of radicals who have nevertheless managed to capture parliamentary debate and keep national majority politics hostage to their own minority interpretation of the 2016 referendum result.

It is rather disappointing to see a mature democracy trapped in such old-school minority tactics.

Other MPs, also a minority in Parliament, seek a second referendum – a position which seems more popular among the wider public. Their tactics thus far have been without bite, but their position has merit.

Proponents of the people’s vote argue that you cannot settle the future of a country and of the generations to come on the basis of one single vote that split a misinformed country in two halves.

There needs to be a final, informed decision on the country’s future. It is rather interesting that these ‘Remainer’ voices were recently joined by an unusual ‘ally’, the icon of British euroscepticism and arch-Brexiteer, Mr. Nigel Farage.

Although going to the people could settle the issue of EU membership, or of the type of Brexit once and for all, the chances of holding a second referendum are very slim.

As this post was being written, they have increased somewhat thanks to the Jeremy Corbyn amendment aiming to push for his party’s proposals for Brexit.

It is said that the party would back an amendment for a second referendum if Theresa May rejects the Labour proposal for a permanent customs union with the EU, and a close relationship with its single market.

Striking a Brexit deal with the EU at the moment seems to be the option that most MPs support. However, there is little reason to believe that in the end an acceptable deal will be reached.

Most MPs have rejected the Withdrawal Agreement on offer, and they do actually believe that a better deal can be renegotiated at the very last moment, even though the EU has made it clear that the current agreement will not be re-opened as far as substantive legal commitments go.

They are ready to back a relevant motion in Parliament (Yvette Cooper/Oliver Letwin amendment).

This is not a polyphony we are witnessing. It is a parliamentary cacophony, which is happening because of the increasing fractionalisation of the two major parties, the Conservatives and Labour.

According to a recent analysis of the Commons voting patterns, published in The Guardian, there exist four persistent cross-party political factions that are fighting for control of the negotiations: the Europhiles; the Europhobes; and those under the Conservative and Labour parties’ whips.

There may be more. What is important is that no fraction has the power to steer the outcome of negotiations with the EU. They are all acting as parliamentary veto players who prevent any progress from happening towards any direction.

This type of party fractionalisation by internal implosion is a much bigger threat to governing and also a much bigger source of deadlock than last week’s splinters, when 11 Conservative and Labour MPs quit their parties over Brexit and formed a cross-party group of independents in the House of Commons.

Defections of that sort are a wider symptom of party fragmentation, but they can neither tilt the balance of parliamentary voting towards one direction, and thus break the deadlock, nor challenge the established two party system.

The problem therefore is not splinters but the internal implosion of the two major parties.

We should worry about this, because if governing under shrinking majorities and coalitions is difficult, governing with fractionalised parties will prove impossible.

At a time when the country craves certainty, parliamentary party fractionalisation means that politics can only offer increased uncertainty.

What can be done? Behind the cacophony of party fractions hides a lack of clear mandate by the people to their representatives. The answers to a series of significant questions are still pending.

And how will the future relationship look like? These are all questions that the first referendum did not address and the current Parliament is unable to answer because it does not have a clear mandate on how to do it.

The mandate gap is consequently filled by the ambitions of political professionals whose narrow minded rationality is winning over the country’s national interest.

Despite fragmentation, everyone in Parliament agrees that the deal on offer is not acceptable and that a deal needs to be reached. As the EU is not going to renegotiate a new deal at this stage there seems to be one simple logical option, beyond crashing out of the Union.

Extend Article 50 and address the mandate gap. Go to the people.