The Franco-German proposal for a €500 billion recovery fund 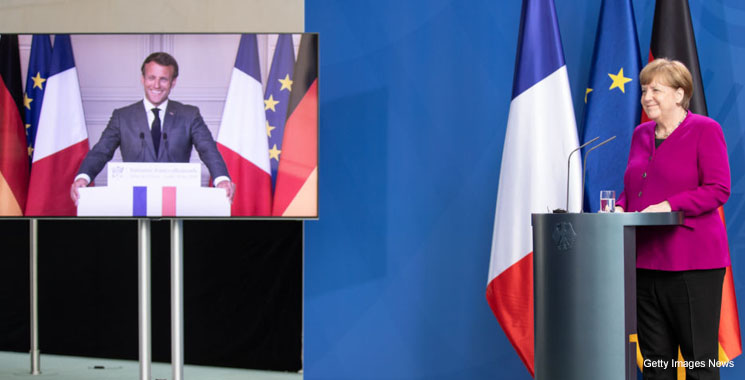 Too slow, too small, too hidebound by conditions, and too little evidence of solidarity: these are among the persistent criticisms of the EU response, so far, to the economic challenges of Covid-19.

Although the Commission is expected to produce its own proposals for a new recovery instrument on 27 May, it has now been pre-empted by a Franco-German proposal, published on 18 May, for a new fund. It is ambitious and, although a lower headline total (at €500 billion) than some were canvassing, would be a major contribution to dealing with the economic crisis.

Their proposition is beguilingly simple. The EU will be empowered to borrow to enable it to spend more than it would otherwise, with the additional money going to regions and sectors most hit by the Covid-19 economic crisis.

The new money will be channelled though the EU budget and the detailed spending will be negotiated alongside the EU’s multi-annual financial framework (MFF) for 2021-2027. The latter – already badly delayed – will determine the mix of ‘usual’ outlays on agricultural, regional development, research and other policies.

The proposed amount is a little over three times the annual budget of the EU or about half the amount expected (prior to Covid-19) to be allocated over the seven years of the next MFF. Spread over the seven years of the MFF, the new fund would be of the order of half a percentage point of EU GDP, large enough to make a difference, in conjunction with extensive national fiscal measures.

The text refers to familiar German priorities for any EU fiscal intervention of supporting the ‘resilience, convergence and competitiveness of European economies’. In addition, the plan has the parallel ambition of favouring investments in the green transition, the digital economy and innovation. These chime with the (pre-Covid) agenda set out by Ursula von der Leyen.

However, if the fund is to serve the immediate macroeconomic need for a fiscal stimulus, the money would best be spent in the earlier years of the 2021-27 MFF. No doubt, some projects can be found which reconcile short-term fiscal stimulus and these longer term goals, but there is a risk that being too focused on the new will crowd out the immediate.

Unlike the previous measures agreed by the EU and due to be implemented as soon as June 2020, the new fund would be grants, not loans. This is important for the heavily indebted countries like Italy or Greece, because the extra debt they are already accumulating is bound to raise financing problems, notwithstanding the prevailing very low rates of interest.

Crucially, too, member states will not have to increase their contributions to the EU, forestalling one likely objection to the new fund. However, the money will have to be re-paid by the Commission and the suggestion in the proposal is that the repayment would take place after the end of the next MFF. By implication, the repayment would be a first call on future EU budgets.

The proposal has the potential to be ground-breaking both by providing a rapid increase in EU expenditure after decades during which the budget has remained at around one percent of GDP, and by establishing the principle of a (quasi) federal deficit as an instrument of EU level economic policy. These features are, however, also likely to be the source of friction from different quarters.

Opponents of a larger EU budget, concerned about letting the genie out of the bottle, will fear that once a bigger budget is agreed, it will be hard to reduce it again. More subtly, if the new spending goes disproportionately to the relatively richer countries which, on current evidence, have suffered (or will suffer) most from the pandemic, expect objections from poorer countries.

The proposal must be seen as a significant concession from Germany to French demands for EU fiscal policy. German trepidation is evident in the language revealing that the new fund will be ‘ambitious, temporary and targeted’.

The big question now is whether Germany, in turn, can cajole the other net contributors to accept so radical a move. The resistance to agreeing a new EU budget following Brexit had been led by the ‘frugal four’ (Austria, Denmark, the Netherlands and Sweden) who argued that the loss of the UK net contribution should be accommodated by cutting the EU budget.

For them a sudden jump to a budget 50% larger than they the amount rejected just three months ago will be tricky. The Dutch government came in for especially strong criticism for obstructing the MFF agreement and its reaction to the Franco-German proposal will be pivotal.

Some concerns can also be expected from central and eastern European countries where the economic effects of the virus have been less severe. The underlying tension here is net positions. If the recovery fund is, as the plan proposes, targeted, suspicions will be rife about an unfair distribution of costs and benefits: juste retour consistently trumps objective spending criteria.

Moreover, several aspects of the Franco-German plan remain to be clarified. They will be central to the delicate process of negotiation characteristic of EU budgetary deals, and will dovetail with concerns about whether the proposals can be ‘temporary’ or, instead, inevitably lead to a transformation of the EU role in public finances.

Potentially the most toxic is how the money the EU borrows will be repaid in post-2027 MFFs. Will the size of the budget revert to the pre-virus norm of one percent of EU GDP and, if so, will the repayments be subtracted from future EU ‘normal’ spending? Such a proposition would induce howls of protest from net beneficiaries.

Italy and Spain have emphasised the word ‘solidarity’ and have been resolute in opposing the imposition of conditions for financial support. But briefings by the Germans suggest the key to persuading the ‘frugals’ is, precisely, to adopt conditionality and the text explicitly refers to ‘sound economic policies and ambitious reform programmes’.

There is also the issue of revenue raising, with the proposals hinting at new digital taxes. Germany has long resisted the idea of taxing powers at the EU level and the text is, perhaps deliberately, vague on the matter. The scope for others to seize on this should not be under-estimated.

The Franco-German proposal is imaginative and could be a game-changer. It reflects obvious alarm from both proponents about the damage being done to the European project by public perceptions of dither and delay. Will it succeed?