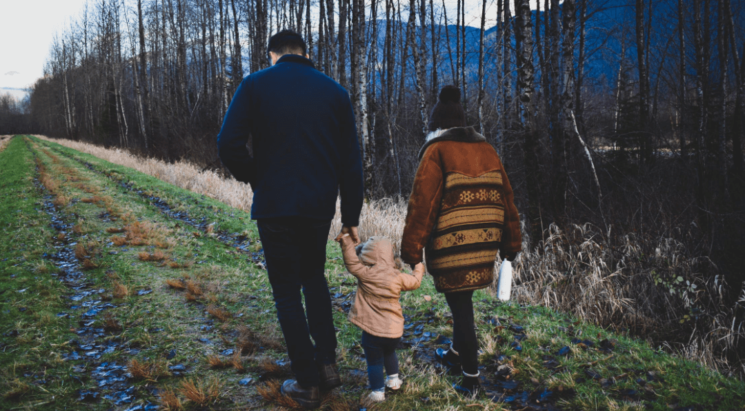 The results of the EU referendum in 2016 prompted greater attention towards generational issues and positioned young and old as having very different experiences, concerns and desires. As a result the notion of intergenerational conflict has become increasingly popular in the media and in some political debates. It is also used in discussions of ‘intergenerational justice’, contrasting in particular the prospects of the ‘babyboomers’ with ‘millennials’.

We asked 1,000 young people in Wales aged 14 to complete a survey that asked about their political views and experiences in 2017-18. Uniquely in comparison to many other studies of young people we also collected data from these participants’ parents and grandparents, to investigate similarities and differences across the generations.

We asked our participants the party they would vote for if there were a general election. Labour is the most popular party among young people and parents, while grandparents were slightly more likely to vote Conservative. 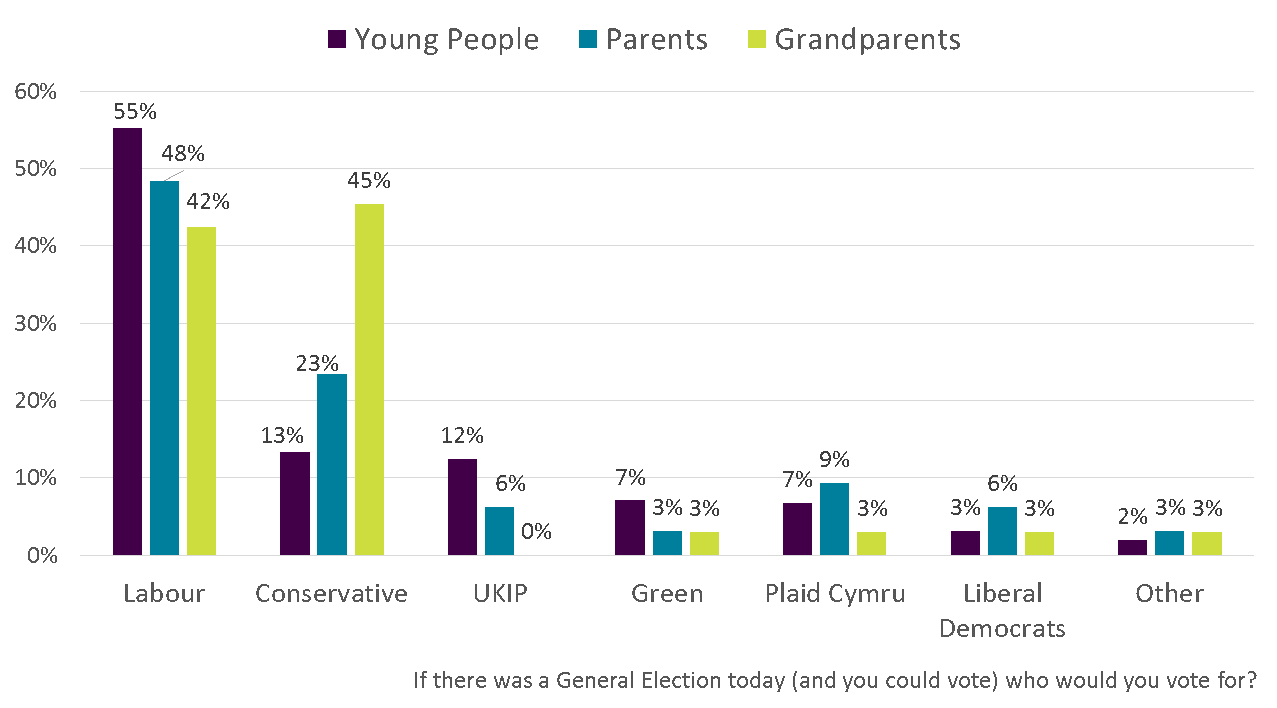 Grandparents were fairly evenly split between left (Labour, Lib Dem, Green, Plaid) and right (Conservative, UKIP). Young people and their parents were at least twice as likely to indicate support for left-leaning parties as those on the right. Our analysis also shows that you are highly likely to vote Labour if your parents/grandparents vote Labour.

This transmission was weaker for Conservatives – with around one in three conservative grandparents having grandchildren preferring Labour. These data provide some evidence of shared political preferences between the generations, with a shift from right among grandparents to left among younger participants.

Political engagement across the generations

We asked participants about their involvement in a range of different forms of political engagement: 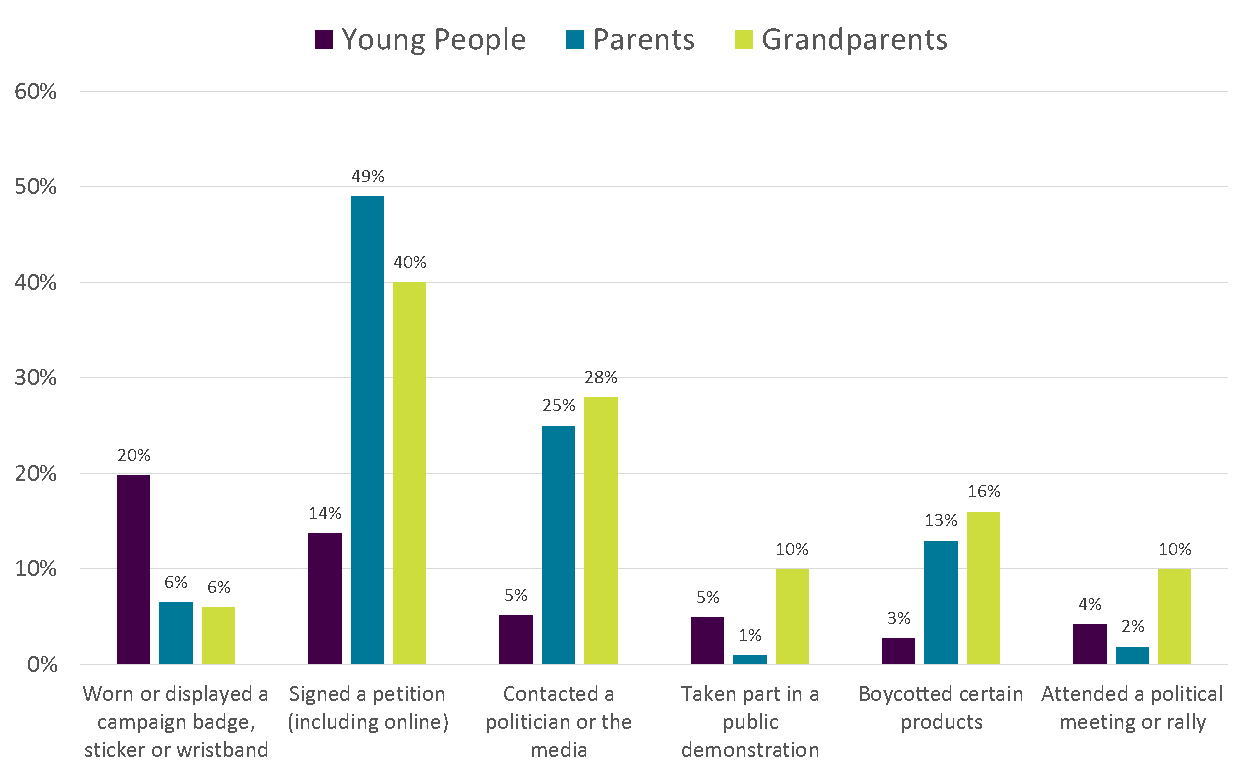 Overall parents and grandparents are more politically engaged than young people, but there are important differences in the forms of political engagement. Young people are also much more likely to wear or display a campaign badge, sticker or wristband, whereas parents and grandparents are more likely to have signed a petition, have contacted a politician or the media, or boycotted products. This suggests that different generations have different ways of engaging politically.

We categorised the different forms of political engagement into two types, either ‘moderate’ (wearing or displaying an item; signing a petition; boycotting a product) or ‘pro-active’ (attending political meetings, rallies or demonstrations; contacting a politician or the media).

One in five of the young people in our study are moderately politically engaged, and over one in ten are proactively engaged – even though they are a long way off from being old enough to vote themselves. 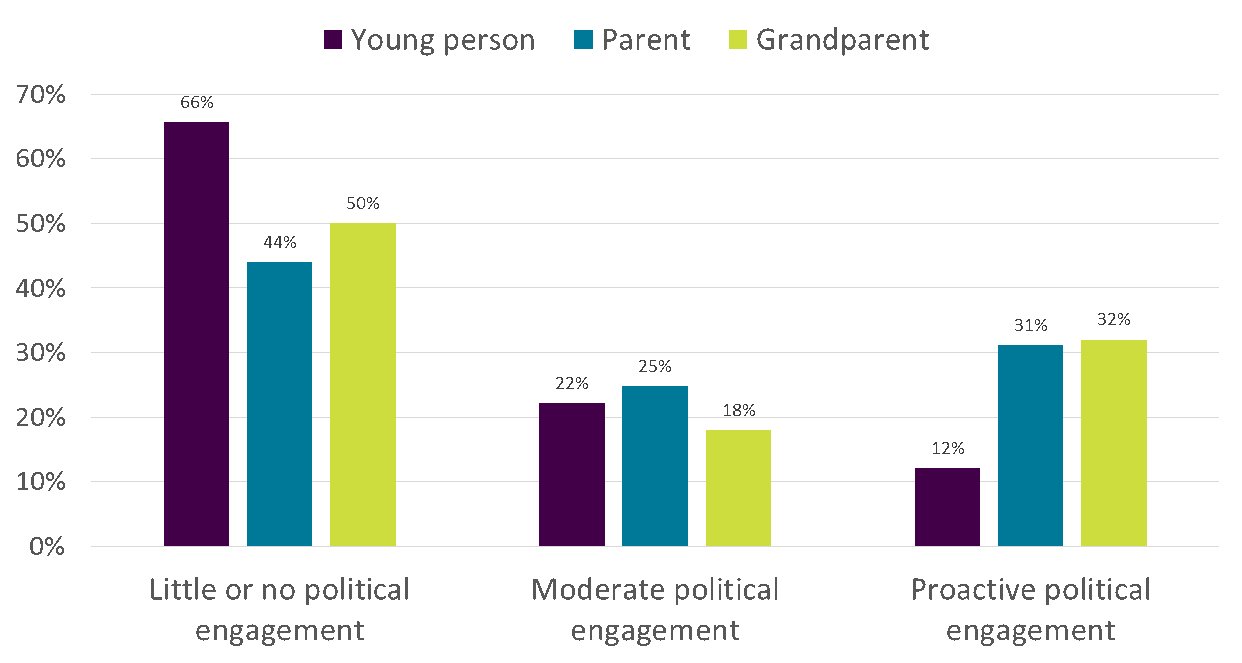 A passive left and proactive right?

We also found that right-leaning participants are two times more likely than left-leaning participants to be pro-actively engaged with politics. These results might surprise some readers as they hint at a passive left and active right. However, rather than being linked to a specific political orientation, this finding might just suggest that being ‘non-mainstream’ within your generation leads you to be more politically engaged.

So this ‘hint’ of a passive left and active right could also reflect that being politically counter to the mainstream (within generations) might suggest you are more politically engaged – the same number of overall proportion of these two groups are pro-active.

Who talks to who about politics? 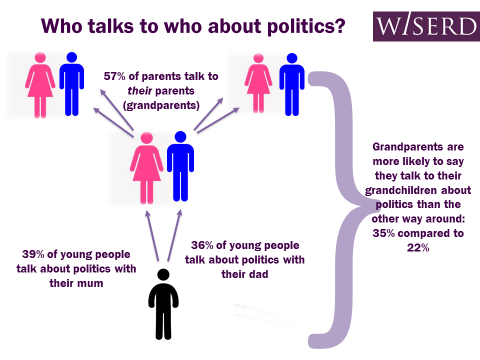 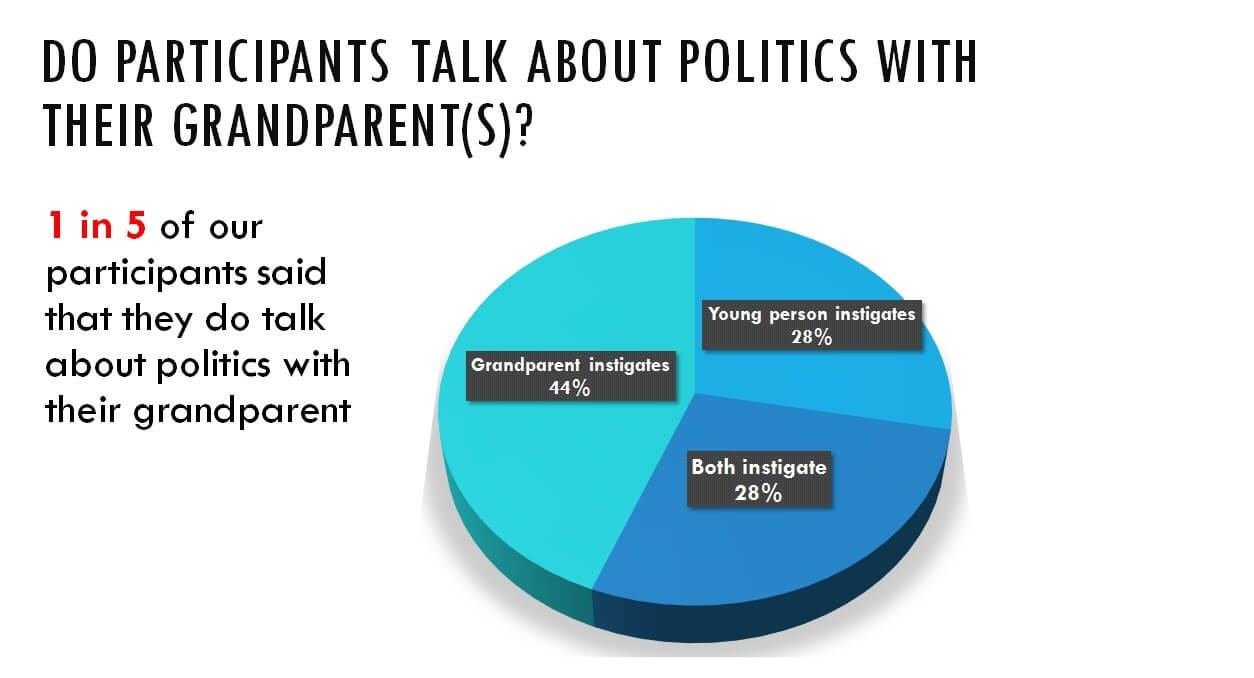 Overall, these findings make a pretty strong case that the political engagement of parent and/or grandparent are the most important determinants of young people’s political engagement. As such, they bring much needed nuance to reports about a ‘generation divide’, and have implications for how we understand and interpret the ‘youthquake’ in UK politics following the EU referendum.

They also link to another study that members of the WISERD project team undertook into euroscepticism – with this study identifying a relationship between having eurosceptic parents and being eurosceptic in later life.

Our study draws attention to the importance of intergenerational family relationships in shaping young people’s political engagement (alongside other civic values). Indeed, contrary to the popular depictions of younger and older generations being at best, far removed from one another, and at worst, in outright opposition, our data suggest that parents and grandparents continue to provide a framework to help their children understand, interpret the social world.

So while different generations may choose to express their politics in different ways, the level of engagement of our parents and grandparents can provide an important springboard into youth political engagement.