The genie is out of the bottle: MPs have a taste for rebellion 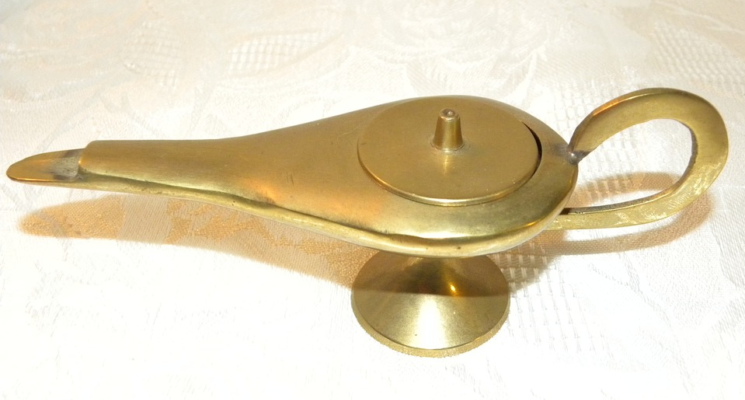 It has been surprisingly easy to become accustomed to the current level of parliamentary dysfunction. On 25 March, 30 Conservative MPs, including three who resigned their ministerial posts, defied the whip and defeated the government.

The defeat gave MPs the ability to introduce legislation and dictate parliamentary time. Yet almost no-one expected this vote to be a fatal blow for the government.

It’s worth remembering that defeats on Brexit have only recently become the new normal. Since mid-July, the government has suffered ten defeats on Brexit issues – more than a third of all divisions on Brexit. Before that, the Prime Minister had suffered just one defeat on Brexit legislation.

Paradoxically, the turning point came on 17 July when the government saw off an amendment to the Trade Bill to compel customs union membership. Theresa May and her chief whip Julian Smith felt distinctly relieved, having won by six votes.

The government both survived a fundamental threat to its Brexit policy, and avoided a split inside the Conservative Party to boot. Rebel MPs would never find out whether the government’s threat to call a confidence vote in itself was genuine.

However, amid the celebration, there was real cause for concern. The government was only carried over the line because the 12 Conservative rebels had been sufficiently counterbalanced by four Labour votes.

Frenetic whipping meant the Conservatives had broken pairing arrangements with Jo Swinson, a Liberal Democrat MP who was heavily pregnant and on maternity leave. The government had clung on by its fingernails and got its hands dirty in the process.

Since that day, almost all Brexit-related legislative business has stalled. The Trade Bill has not returned from the Lords for final consideration by the Commons. The Agriculture Bill is yet to be scheduled for report stage in the Commons. The same goes for the Immigration Bill.

But how did a once pliable House of Commons, made up of the same MPs who had defeated the government just once in ten months on Brexit votes, suddenly become unmanageable?

The truth is that, following the 2017 general election, the government’s majority was always a mirage. From the introduction of the EU Withdrawal Bill in September 2017 to the government win in July on the Trade Bill ten months later, its average majority on Brexit votes was just 23 MPs. That made 12 MPs decisive at any given moment, particularly the ten DUP MPs who have a formal arrangement with the government.

Most of those small majorities were only cobbled together with the votes of the DUP, Labour rebels or both. Out of 90 votes in this period, the Conservatives could only rely on their own MPs to win 43. It is curious that a prime minister who has relied more often than not on the opposition has spent such an inordinate amount of time talking to the benches behind her. 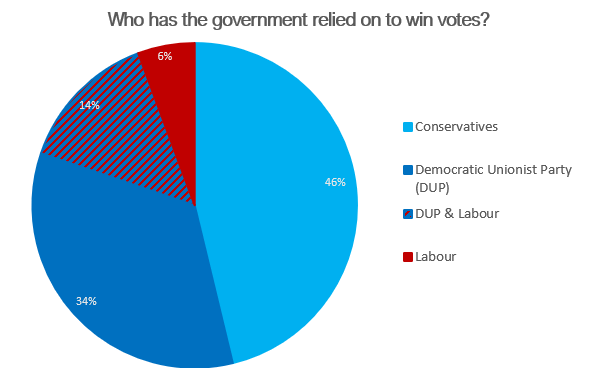 It is no surprise, then, that this fragile arrangement shattered as soon as key trade-offs and choices on Brexit loomed. Tack one way and Conservative MPs in favour of a softer Brexit, or even none at all, would rebel. Tack the other and a (bigger) chunk of Brexiteer MPs would do the same. In the end, moving in neither direction proved no better: the first meaningful vote on May’s Deal succumbed to a 230-vote defeat, the biggest ever for any government in the Commons.

Perhaps the real surprise is that the government managed to maintain a working majority for as long as it did. An important factor was the reticence of MPs to be seen to overturn executive power.

Earlier in the parliament, many Conservatives who wanted the government to pursue a softer Brexit outcome were wary of being seen to tie its hands and impose parliamentary constraints mid-negotiation. Constitutional squeamishness meant Theresa May retained her grip on the wheel.

But rebellion, it seems, gets easier with practice. In June 2018 MPs considered an amendment tabled by Dominic Grieve, which the government ultimately managed to win by 16 votes. This would have allowed MPs to table their own suggestions on Brexit if a deal wasn’t reached by (what was then seen) as the dangerously late date of 21 January.

By January, however, Grieve had got an equivalent measure through. The government also just about headed off the first serious attempt to pass ‘indicative votes’, by 2 votes, on 14 March. MPs’ reluctance to overturn parliamentary convention was at a tipping point. That point was finally passed on 25 March when the Letwin amendment on indicative votes was approved.

No doubt the ticking clock of the Article 50 negotiations and impending Brexit deadlines have focused minds and forced MPs to confront the government in recent months. MPs have faced several ‘act now or give up control’ moments.

The Grieve amendment on 9 January was one such moment. It aimed to reduce the government’s time to respond to a defeat of its Brexit deal – which would be voted on a week later – from three weeks to three days. The fear was that the government would run down the clock and leave MPs with a deal-or-no-deal choice unless they intervened.

Public opinion has also softened over the past two and a half years. When asked how they would vote now in a referendum, a small but clear majority would now choose Remain according to the polls. This gradual shift has given cover to MPs – a majority of whom supported Remain – to assert themselves.

Also, the fact that a large faction of pro-Brexit MPs have repeatedly rebelled against the government and the Brexit deal has allowed other MPs to do the same without the risk of being seen as blocking Brexit.

What does all this mean for what comes next? Even if Theresa May’s deal passes, will she be able to put the Brexit genie back in the bottle to pass the Withdrawal Agreement Bill?

MPs might feel – having supported yet another, and perhaps the biggest, step towards Brexit – that they have license to be even more rebellious when it comes to that bill. Equally, pressing deadlines and the need to focus minds might mean May gets an easier ride once a deal is passed.