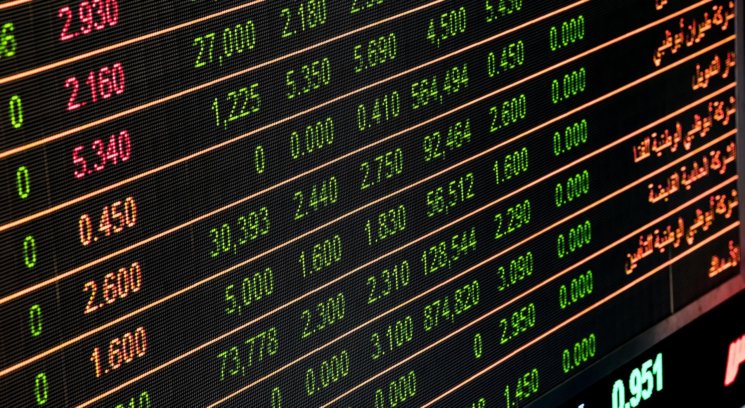 The outcome of the Brexit referendum caught financial markets by surprise, resulting in sharp moves in market prices. But what do those moves tell us about the underlying economic impacts?

In new research we examine the behaviour of government bond prices from 1999-2020, drawing particular attention to the effect of the Brexit vote in 2016.

There is a consensus that the long-term impact of Brexit is likely to be a reduction in trade, particularly if negotiations fail to deliver a mutually beneficial EU-UK trade agreement, a decline in migration, and reductions in foreign direct investment, all of which may imply lower productivity growth.

However, while other financial markets (like the equity market) did react substantially to the referendum vote, the response of long-term government bond yields appears superficially to have been somewhat muted (Figure 1). 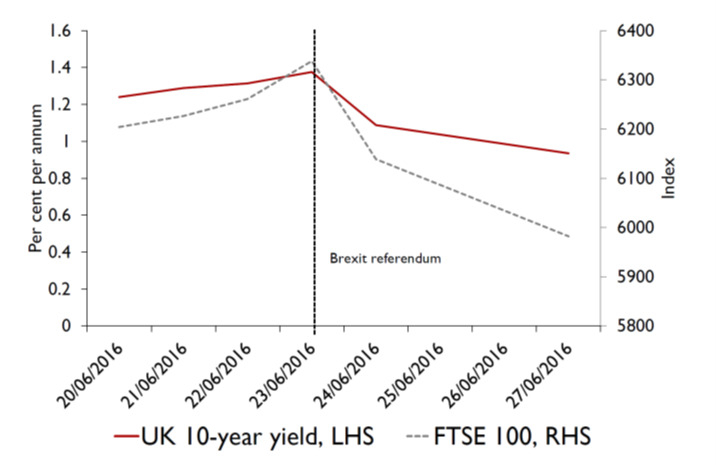 This latter point is particularly important as the Bank of England (BOE) now holds a large fraction of UK government debt. Economic theory predicts that increases in uncertainty, the ‘flight to safety’ and/or negative news about the economy – all likely reactions to the Brexit vote – would push bond yields up.

However, other facts – such as expectations for lower future growth and therefore perhaps lower inflation, as well as for further non-conventional monetary stimulus – would push them down.

In order to disentangle these different effects, we use a statistical technique to decompose the contributions of these various forces.

Building on earlier research, we first decompose UK 10-year gilt (government bond) yields into a component capturing expectations about future risk neutral rates – that is, the rate of return that investors would require in a completely certain, risk-free world and a ‘term premium’ which incorporates changes in investors’ attitudes to risk.

We apply some standard text mining techniques to the minutes of the Monetary Policy Committee (MPC) meetings and categorise text as indicating ‘dovish’ or ‘hawkish’ attitudes to monetary policy, as well as the degree to which unconventional policy tools are discussed, and indicators relating to uncertainty, quantitative easing and Brexit itself.

To understand what the drivers are of each individual yield curve component – i.e. future risk neutral rates’ expectations and term premium – we run a series of exercises which allow us to shed light on the response of the yield curve determinants to changes in the state of the economy, as well as the messages conveyed by monetary policymakers.

After 2008, we find that the Bank’s announcements about its asset purchase programmes also led to a persistent reduction in the term premium.

Relating these findings to movements in bond yield components on days when news about Brexit emerged, we conclude that the decline in the bond yield after the referendum most likely resulted from an increasing expectation about monetary policy becoming more expansionary as growth slowed.

While anticipations of lower policy rates over the longer run lowered risk-free rate expectations, the anticipation of a further programmes of QE appeared to lower the term premium. However, there were offsetting effects.

Having controlled for the impact of central bank communication, we estimate a positive effect of Brexit-related uncertainty on the term premium, particularly over the medium-term – in other words, Brexit raised market perceptions of future risk.

So overall, while Brexit raised market perceptions of the risk associated with the British economy, this was offset by changes in expectations about future monetary policy.

To conclude, the BOE’s communications have become much more transparent and clearer since the financial crisis.

This transparency and predictability resulted in a good outcome for the UK at the time of the referendum result because bond market participants correctly inferred that the BOE would pursue an accommodative monetary policy that would keep longer term yields low.

This ultimately helped also other segments of the economy, such as lending and the mortgage market.

By Sathya Mellina, macroeconomic and financial analyst and Dr Corrado Macchiarelli, principal economist at the National Institute of Economic and Social Research (NIESR). With thanks to NIESR for funding this study.