The Irish border: why the US will not back down 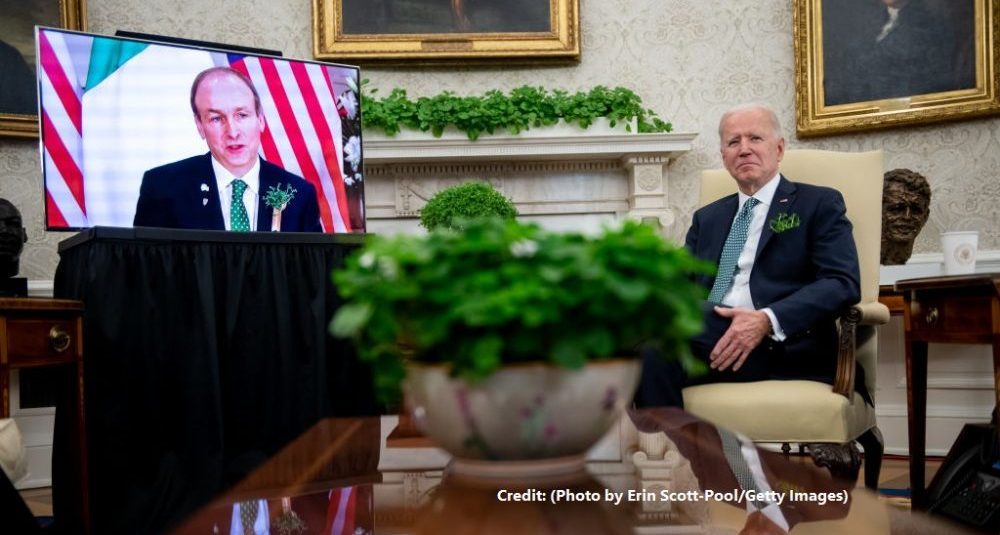 The US has not been shy in reminding London it has a stake in the fractious rolling dialogue over the UK’s future relationship with the EU. Powerful members of Congress did so in July 2019 and 2020 and now the story is back again. This time the proximate cause was President Biden’s warm St Patrick’s Day meeting with Irish taoiseach Micheál Martin (an annual tradition).

This coincided with reports in the British press that the US was firing ‘a warning shot’ at the UK Government over the Irish border.

Senior US Senators of both parties unveiled a resolution expressing, as the Financial Times summarised it, opposition to ‘any UK-US trade deal unless the British prime minister upheld the terms of the 1998 Good Friday peace agreement.’

The context is that the UK Government has been shown signs of backsliding on its exit agreement from the EU, agreed in January after months of brinksmanship. That deal left much still to be settled regarding new permanent terms of trade between the two parties.

But it did at least resolve in principle the vexed issue of the Irish border: to avoid undermining the Good Friday Agreement by establishing a customs border on the island of Ireland, checks would instead be imposed on goods shipped between Northern Ireland and Great Britain.

Unsatisfactory as this arrangement was in all sorts of ways, it was the only viable way to reconcile preserving the Irish peace settlement with two non-negotiable positions adopted by the UK Government: that Brexit must happen, and that the rest of the UK must leave the EU Customs Union.

Almost from the moment it was signed, the Government has been reluctant to implement it, openly mulling the idea of reneging. Recently it has unilaterally loosened trade with Northern Ireland and, in effect, dared the EU to do something about it, prompting legal action.

The US has three roles in this situation. One is as a longstanding ally of Britain, with which it has had a much ballyhooed ‘special relationship’ for the better part of a century.

This led many Conservatives of the kind that speak excitedly about ‘the Anglosphere’ to presume a favourable trade deal with the US would be an early achievement of Brexit.

A second is as a key supporter, historically, of the European integration project. In the context of the devastation of World War II, and then the geopolitical struggle of the Cold War, the US actively encouraged its European allies to pool their sovereignty in key areas.

This had the twin aims of consolidating peace between Europeans themselves, and making them collectively more useful assets in the transatlantic alliance.

The third is as a powerful backer of the Good Friday Agreement. The social and political power of ‘Irish America’ has long made the struggle over Irish partition a thorn in the side of relations between Washington and London.

Support for paramilitary violence during the IRA campaign of the 1970s-90s was always outré in American politics.

But the US was sufficiently sympathetic to the underlying cause of Irish nationalism that it had standing to play honest broker, and ultimate guarantor of good faith, when the time came to convene Britain, the Republic, and the Northern Irish factions to craft a negotiated settlement.

In considering US intervention in the current UK-EU dispute, it is important to put these three American roles in their appropriate proportion.

The Good Friday Agreement was a landmark achievement of American diplomacy in the early post-Cold War era.

It was overseen by Bill Clinton, a president of the same party and political generation as Biden. Biden himself identifies as Irish-American. His senior advisors, including his Secretary of State, share his view of Britain’s current handling of the Northern Ireland protocol.

Defence of the GFA enjoys robust support across the political spectrum in the US. Its unilateral dismantling by the UK Government, over the objections of Dublin and the protests of the nationalist population of Northern Ireland, would be entirely unacceptable to the US administration and to Congress.

Negotiating the specifics of a US-UK trade deal will be challenging even under favourable circumstances. But the chances of one being agreed and ratified by the US in the event of the GFA’s collapse due to British actions of the sort presently contemplated are zero.

The other two roles are less pertinent to the current spat. If the UK’s departure from the EU seemed to presage the institution’s disintegration – as seemed conceivable when it was first voted through by the British public – that would be a source of unease in Washington. It might give rise to some efforts to shore up the European project with a show of support.

But that risk seems to have subsided for the time being, as even populists in other European countries, having witnessed the agonies of British policy over the last four years, seem to have thought better of requesting a portion of the same.

The Irish issue aside, therefore, there is no obvious reason for the Biden administration to favour either the interests of Brussels or its narrative.

At the same time, the ‘special relationship’ is well and good, but only a fool would imagine it gives the US reason to take Britain’s side in a self-created crisis that brings it into conflict with some of America’s other closest partners.

When President Trump held office there was at least some chance that jingoistic rhetoric and antagonistic diplomacy emanating from London might win some rhetorical admiration, if little else. Under the new administration, there is no chance of even that.

The UK can expect no special encouragement, but also no hostility, from Washington as it tries to hash out its economic relationship with Europe.

The US has its own economic interests, and it will seek to advance them if and when they arise. But in terms of the big picture, it has no dog in this fight.

But if the UK Government brings down the roof of the Irish peace settlement by disavowing its solemnly undertaken responsibilities, that will be quite another matter. In that case, the Prime Minister can forget not only about getting an imminent trade deal from the new administration, but about much else besides.

By Dr Adam Quinn, Senior Lecturer in American and International Politics at the University of Birmingham.